Similar to Lalese Stamps’s personal challenge to create 100 ceramic mug handles, a Los Angeles-based artist has crafted an amusing series of hand-cranked automatons in just 30 days. Federico Tobon, of wolfCat Workshop, used popsicle sticks, metal clips, paper, and scrap material for One Month of Small Machines, a four-week-long project that generated different, moveable figures and animals each day. “The A-HA moment from these projects was when I discovered that using paper gives these machines a very organic feel,” he said. “Some of them would look very stiff and mechanical otherwise.”

Since November 2017 when Tobon created these miniature apparatuses, he’s taken on more month-long challenges, which he often shares on Instagram. Check out the full collection on his site or by watching the video below. (via Laughing Squid) Artist Juan Fontanive (previously) constructs ornithology-oriented flip books which constantly loop with the help of a few hand-built mechanics. The still images are sourced from 18th and 19th-century natural history illustrations, and when combined imitate the motion of a bird in flight. Although these works were completed this year, Fontanive has been working on the series since 2004 while he was studying at the Royal College of Art. Previous animation explorations have featured butterflies and birds drawn with graphite and colored pencil. You can see more of his automated sculptures on his website and Vimeo. LEGO has been known for their small stackable bricks for over eighty years, as each new generation uses the brightly-colored blocks to build forts, towers, and other imaginative structures big and small. Although adults have also been interested in new sets throughout the years, LEGO is often associated with children’s play. The toy company aims to change this perception with a new line of interactive objects aimed at adults. LEGO FORMA doesn’t contain any bricks, but rather gears, rods, and customizable skins which assemble to create your own moveable koi fish or shark.

By cranking the completed work, the fish has a lifelike movement— swimming through the air as it turns side-to-side on its stand. The completely new format is designed to be a relaxing, creative challenge that satisfy the human desire to build something with our hands. Each piece takes a few hours to assemble in full. LEGO just wrapped up a campaign to judge feedback on the new line on Indiegogo. You can read more about the LEGO FORMA pilot program on their website. (via My Modern Met) 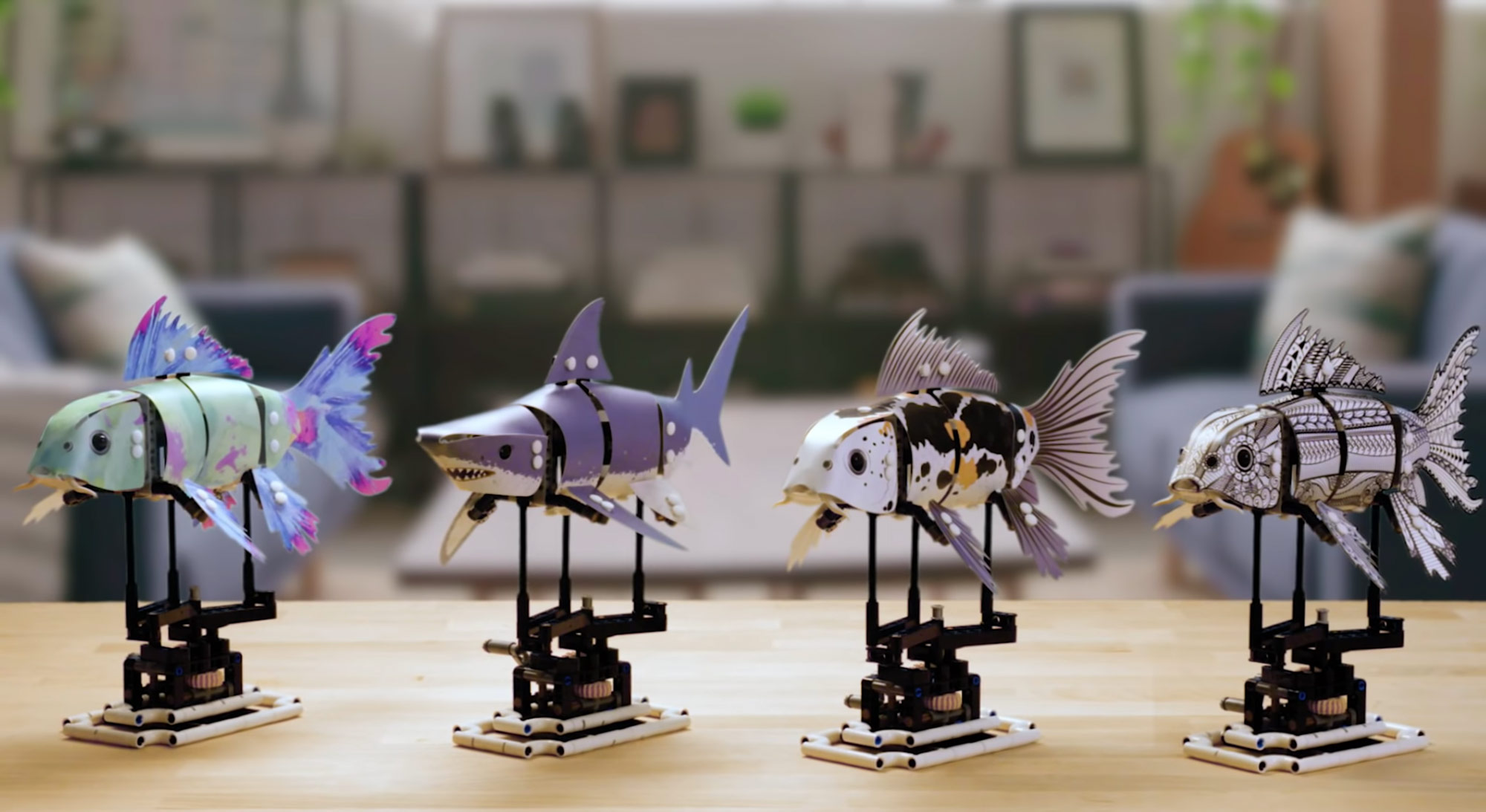 Solstice: A Wooden Kinetic Clock Expands and Contracts with the Passing Hours

Solstice is a shape-shifting wooden clock designed by Matt Gilbert of the London-based studio Animaro. The new interior design object presents different configurations throughout the day, expanding to its widest form at noon when the sun is at its highest point, and contracting at 6 PM when the sun is near its lowest. This meditative movement was inspired by nature, specifically how a flower expands its petals to absorb more sunlight. The clock also is a return to our time-based roots, as its design has users rely on its shape and pattern much like we would a sundial.

The clock has two settings, one that completes a rotation every 60 seconds, and one that completes a rotation during a 12-hours cycle. To switch between the two modes, the user taps on a sensor located on the bottom of the clock. The Solstice clock is currently available for pre-order on Kickstarter. The crowdfunding campaign runs through December 13, 2018. You can see more of Animaro’s previous designs on their website and Instagram. (via Colossal Submissions)