Upcycled Lobster Shells are Transformed into Functional Planters and Packages Four designers from the Royal College of Art and Imperial College have found a second life for the lobster tail you might’ve splurged on for Valentine’s Day. The project team, dubbed Shellworks, created a bioplastic by combining vinegar with chitin, a fibrous substance that is the main component of crustacean’s shells, as well as fungi cell walls. Though there is currently a commercially available version of chitin, called chitosan, it is extremely expensive.

The Shellworks team created five of their own machines, named Shelly, Sheety, Vaccy, Dippy and Drippy, to manipulate the chitin-based materials with varying stiffness, flexibility, thickness, and translucence. The resulting range of potential products includes self-fertilizing planters, pill blister packs, and food containers, which can be recycled or composted. By making this process more accessible and affordable, Shellworks hopes that their innovations might allow for larger-scale replacement of the plastic we use every day. You can learn more about the project in the video below, and on the Shellworks website and Instagram. (via dezeen) Within the vast arena of Japanese sculpture there’s a small niche category known as jizai okimono. The craft involves carving realistic animals whose bodies and limbs are all animated through joints just like the real living thing. Some common subjects are birds, fishes, snakes and insects. It’s a craft that originated in the late-Edo period (late 1700s) when metalsmiths and armor makers, faced with a decline in demand for armor, found themselves with plenty of time on their hands. But ever since it’s modest beginnings, the lobster, with its numerous joints and undulating back, has been considered to be the most difficult and challenging subject.

Ryosuke Ohtake, a young 25-year old sculptor, caused quite a stir recently when he boldly took on the challenge and created an immaculate and animated lobster from wood. What stunned many was that not only was the piece carved from wood (which is considered far more difficult than using copper) but the fact that this was Ohtake’s first official jizai okimono. The lobster was part of a wooden sculpture exhibition at Tokyu Department Store in Tokyo this April. Watch the video to see exactly how realistically this lobster moves. 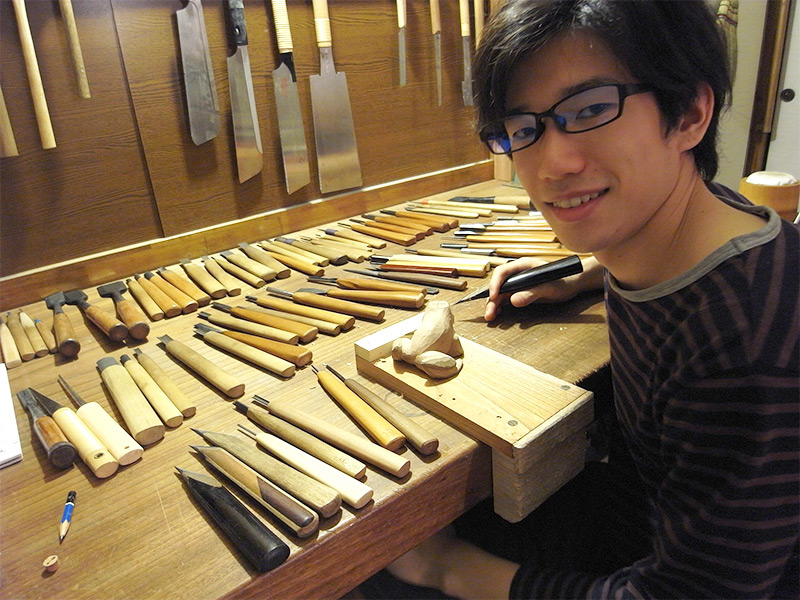