Polish artists Sainer and Bezt, collectively known as Etam Cru, paint large scale murals of surreal and frequently humorous subjects in locations mostly around Eastern Europe. The duo traveled to the U.S. this year to paint a wildly popular mural titled Moonshine at the Richmond Mural Project depicting a girl sitting inside a jar of strawberries. The piece is now available as a print over on Art Whino. Above is a collection of their most recent work from 2013, much more of which you can see on Facebook, the Etam Cru blog, and on Behance. (via Arrested Motion)

Pixel Pancho and Vhils Collaborate on the Streets of Lisbon Italian artist Pixel Pancho was recently invited by Underdogs to create a number of murals and other interventions in Lisbon, Portugal. One of my favorite pieces was this awesome collab with street artist Vhils (previously), known for his instantly recognizable “subtractive” style of etching imagery into walls. The steampunkish android holding a derelict boat was placed on a building next to the the Tagus river near where it empties into the Atlantic Ocean. Images courtesy Underdogs and Miguel Vinagre. (via StreetArtNews)

Overpass Illusion and Other Murals by Dasic Chilean-born street artist Dasic lives and works in New York where he creates large-scale outdoor murals, paintings, sculptures and other works in a wide variety of different styles, though all of which seem to explode with color. One of my favorite works is an extraordinarily large piece he painted in Newburgh, New York that spans the ceiling as well as the opposite walls underneath a large overpass. Dan Perez sits down with the artist for a brief interview above. 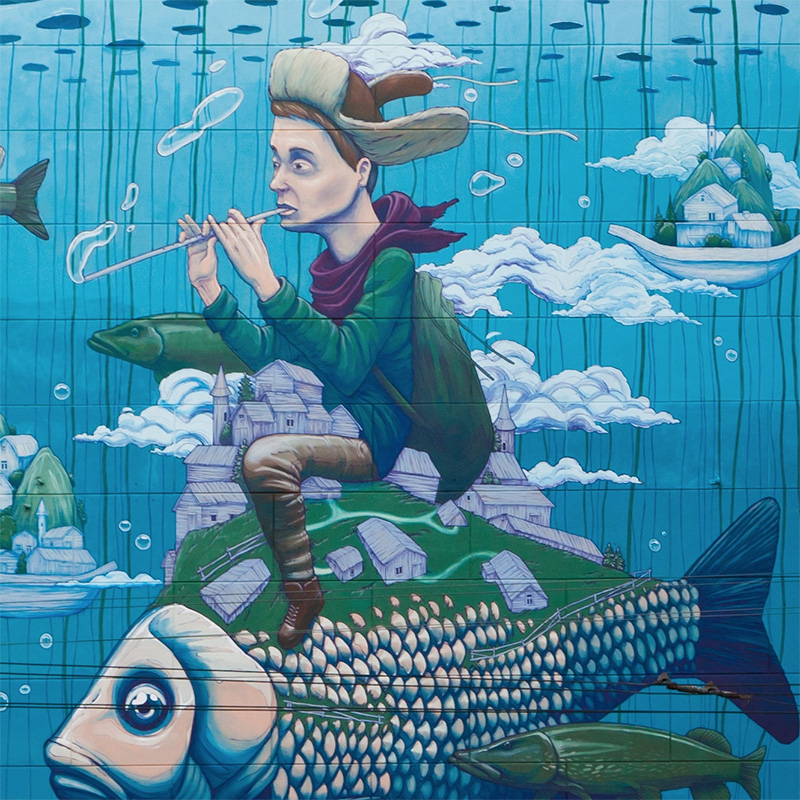 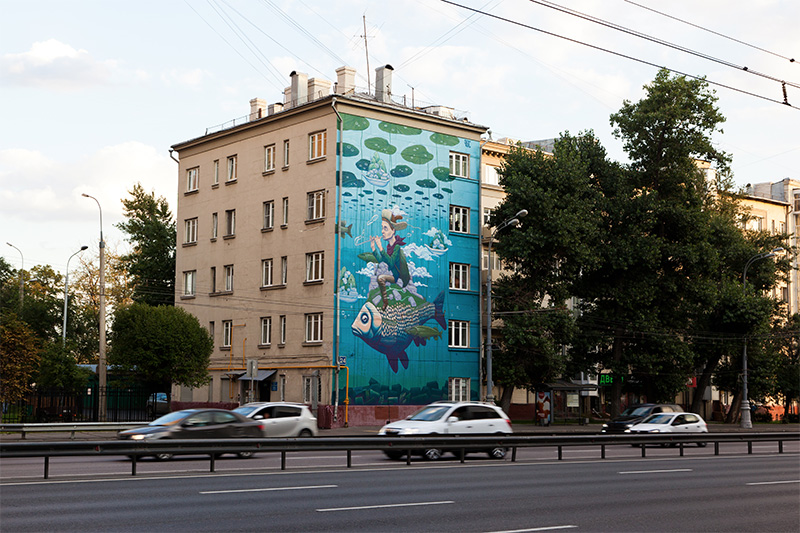 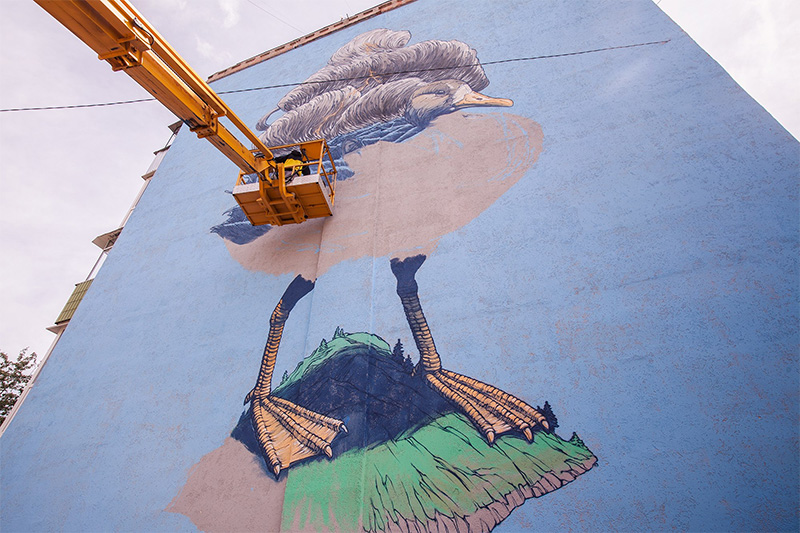 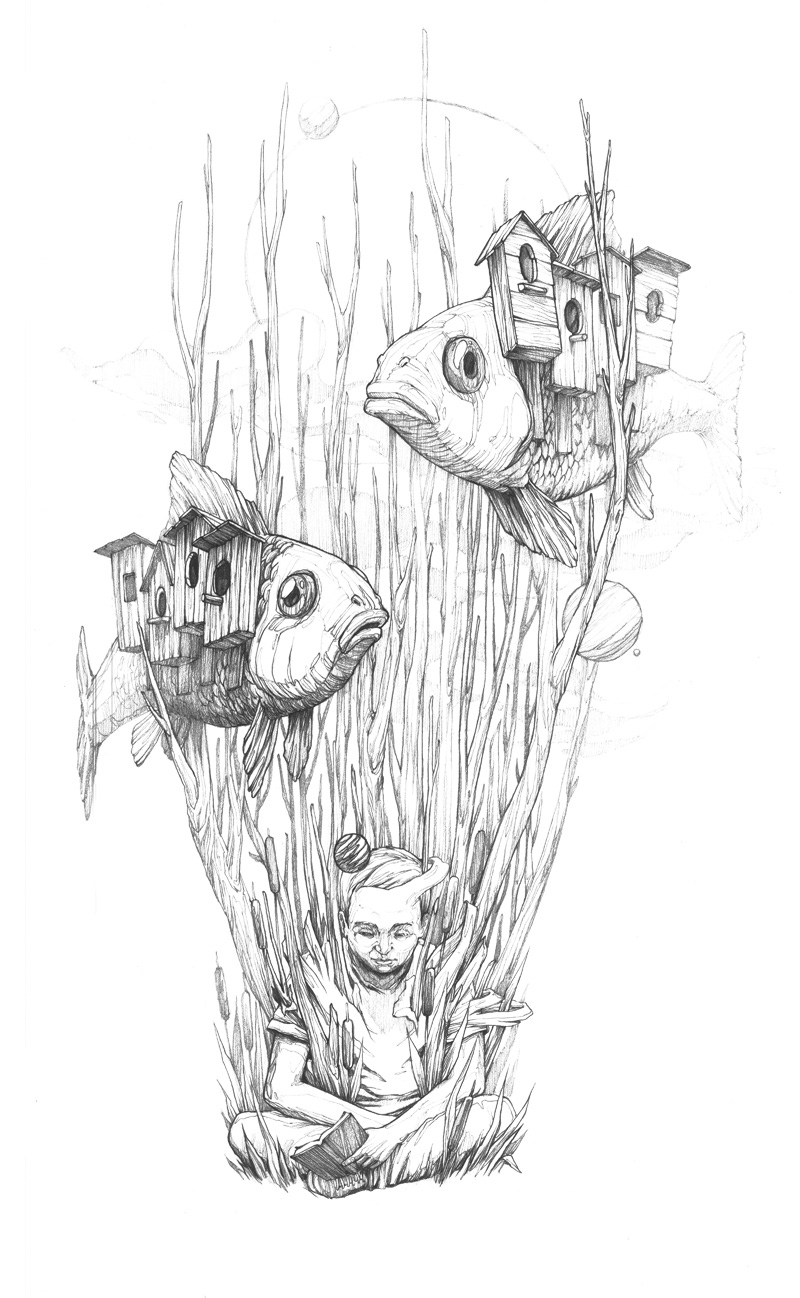 With a wildly surreal imagination, artist Rustam QBic from Kazan, Russia creates fish adorned with houses and windows, elephants sprouting giant buildings, and a goose whose feathers are made from a ocean of angry waves. Almost every one of his creations, be it on paper or on a wall is brimming with wonderful ideas and often have to be viewed up close to appreciate their full detail. He most recently completed murals for the LGZ Festival and for Art-Ovrag 2013, and you can see many more paintings, illustrations, and other work over on Facebook. (via StreetArtNews) This fun piece was painted by illustrator and muralist Mona Caron on Duboce Avenue at Church Street in San Francisco. Titled Manifest Station, the small mural was painted on a standard utility box and has to be viewed from a specific spot so that the horizon lines of the artwork match those of the actual intersection. As an added bonus, a mural in the background which was repainted in part on the utility box is actually an older piece by the same artist. Caron is currently working on a surprisingly great series of weeds and just painted a giant wildflower in Union City. (via CJWHO)

Murals by DALeast Seem to Explode with Energy It’s impossible to mistake any piece by South African muralist DALeast (previously) as belonging to any other artist. His signature style involves a delicate interplay of unraveling ribbon-like lines that form his animalistic and human forms. The tigers, birds, deer and people he depicts are already bursting with motion, but the added line work seems to create an elevated sense of energy, as if the figure itself is about to explode.

Above is a collection of work over the last year or so, and his most recent mural (top) just popped up at Wall Therapy in Rochester, NY and is by far my favorite piece of his I’ve seen. See much more on his website. (via StreetArtNews)