The Giant Birdsnest is exactly that. Except it’s not made from twigs and it’s definitely not for the birds. The gigantic, cozy nest is made from a foam-padded wooden backwall that’s covered with wooden panels and filled with egg-shaped cushions that allow for ergonomic sitting positions. Designed by the Israel-based design firm OGE Creative Group, the Birdsnest is a “new and inspiring socializing space: a fusion of furniture and playground” where ideas come to get incubated.

It’s a multifunctional piece of furniture that can be used for resting, browsing the web, reading, talking and doing almost anything. It comes in 4 different sizes (ranging from 2,700 – 7,900 Euros) and, at its largest, can accommodate up to 16 people at a time. We want all our future meetings to be held in the Birdsnest! (via Laughing Squid) 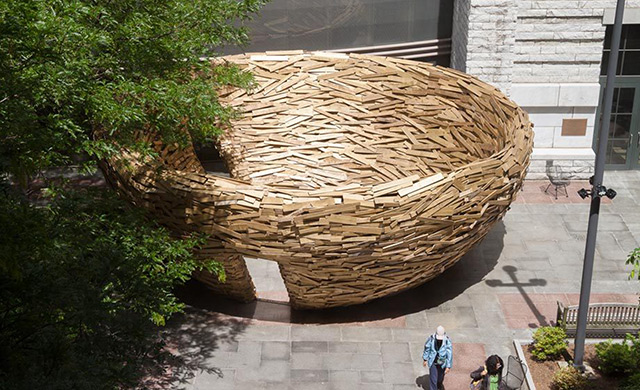 The Reading Nest is a new site-specific installation by artist Mark Reigelman outside the Cleveland Public Library. Reigelman obtained 10,000 reclaimed boards from various Cleveland industrial and manufacturing sites and worked with a team of people over 10 days to construct the nest which was completed earlier this month. From his statement regarding the project:

For centuries objects in nature have been associated with knowledge and wisdom. Trees of enlightenment and scholarly owls have been particularly prominent in this history of mythological objects of knowledge. The Reading Nest is a visual intermediary between forest and fowl. It symbolizes growth, community and knowledge while continuing to embody mythical roots.

You can see many more hotos of the Reading Nest over on his website. (via colossal submissions) 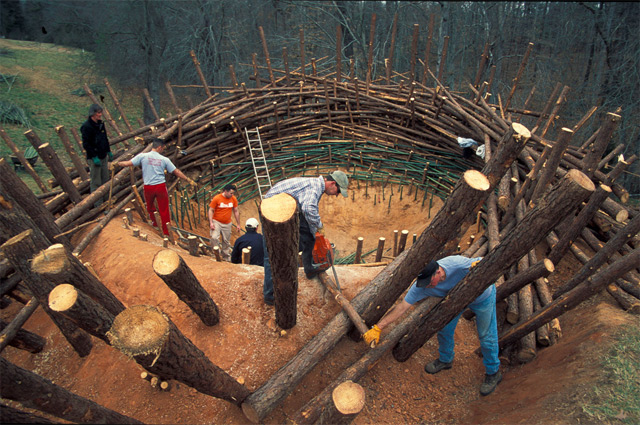