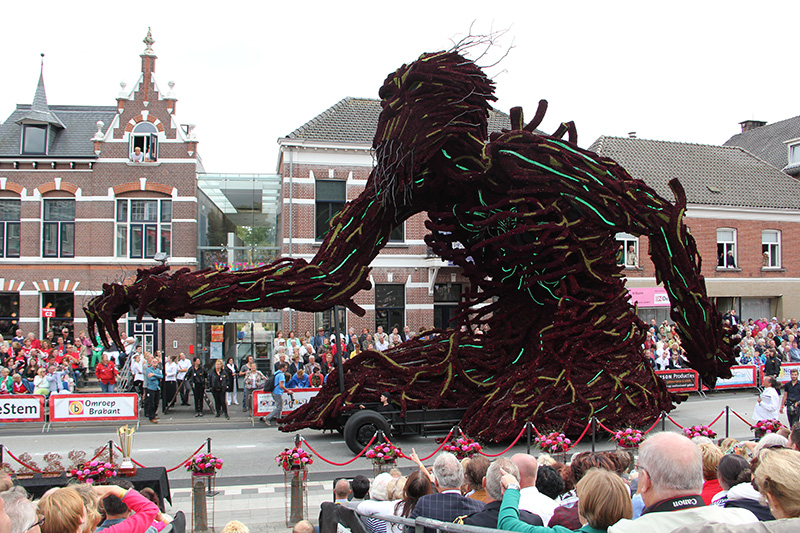 It’s the biggest time of year for the small town of Zundert in the Netherlands. Twenty gigantic floats were paraded through the city as part of Corso Zundert (previously), an annual flower parade that sees teams of designers and artisans compete to build the most original sculpture covered almost completely with dahlia flowers.

Several floats appearing in Corso Zundert this year contained moving parts, including the winner, Crazy Gold, that had some 53 moving components. You can see a ranking of this years competitors over on Croso Zundert, videos on YouTube, and many more photos courtesy Omroep Brabant.

Towering Sculptures Made of Flowers on Display at Bloemencorso, A Flower Parade in Zundert, Netherlands Aside from being consistently ranked as one of the best countries to live in on Earth, file this as reason #4,123 to stop by the Netherlands: Bloemencorso, the annual parade of flowers in Zundert. That’s right, every float here is made from natural flowers, specifically dahlias. From twisting architectural structures the size of houses to bizarre animatronic birds and puppets, and even animals made from swooping gestures reminiscent of graffiti, Bloemencorso seems to have a little bit of everything. Despite the relatively small nature of Zundert (a small town north east of Belgium with a population of about 20,000) the variety of and ingenuity of these sculptures seems to know no bounds. I’ve embedded an hour-long video of the entire parade from 2012 above, it’s worth skipping around a bit to see everything, and you can see more videos on the event website and in this gallery. Want to see it in person? You’ll need to wait until next year, the next event happens September 1 and 2 of 2013. (thnx, kjeld!)