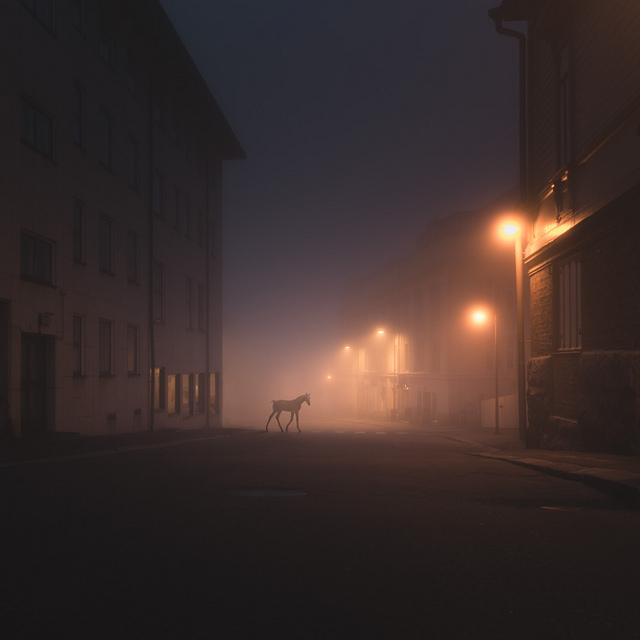 Fine art photographer Harold Ross uses delicate light painting techniques to create surreal landscapes photographed late at night. The photographer, who has been perfecting his methods for over 25 years, uses an LED flashlight and other lights to selectively illuminate various areas in each photograph, a process he refers to as “light sculpting”. The results are scenes that look almost like digitally rendered illustrations, with numerous light sources that seem to come from every direction. The photos you see here really don’t do his work justice, see them much larger on his website. Ross also teaches about light painting over on his blog. (via faith is torment)

Rippled is a music video shot by Australian animators Oh Yeah Wow for a track off All India Radio’s The Silent Surf. The entire video was painstakingly rendered frame-by-frame in camera using long exposure light painting techniques. I think my favorite thing about this piece other than some of the brilliant sequences (and there are many) is the near constant presence of blurred people in the background who look like ghost puppeteers, moving the figures and lights bit by bit. Stunning work. (via vimeo)

Photographer Thomas Jackson (previously) has been working on a new series of images based on the idea of swarms, shooting large hovering masses of objects in locations around New York. He says the idea is still a work in progress and that some of these photos should just be considered “sketches,” but I think they’re really fantastic already. See them a bit larger on his site.

The 2011 Christchurch earthquake was the largest natural disaster in New Zealand’s history, claiming the lives of 181 people and leaving behind nearly $30 billion in rebuilding costs. Touched by the events of that February day, photographer Fabrice Wittner set out to confront the destruction the best way he knew how: by making art. His Enlightened Souls project utilizes large, human-sized stencils that are painted with light during long exposures, creating thin portraits that appear almost like holograms. Many more images and process shots can be seen here. Images courtesy the artist. (via behance)

I have probably seen hundreds of photographs made using in-camera lighting effects, some with simple shapes to typography, and even television ads. However this series of animal and dinosaur skeletons from San Diego-based photographer Darren Pearson seem to be on a wholly different level. I have no idea how he can make something so complex in a single photograph.

Beautifully executed animations by Texas photographer Ignacio Torres from his series Stellar. Via his website:

This project began from the theory that humans are made of cosmic matter as a result of a stars death. I created imagery that showcased this cosmic birth through the use of dust and reflective confetti to create galaxies. The models organic bodily expressions as they are frozen in time between the particles suggest their celestial creation. In addition, space and time is heightened by the use of three-dimensional animated gifs. Their movement serves as a visual metaphor to the spatial link we share with stars as well as their separateness through time.

These are just a selection of the series, click through to see the entire project. (via paranaiv)