In this fun series of painted objects titled “It’s not what it seems” by artist Hikaru Cho, common foods are transformed with deftly applied acrylic paints to look like other foods. A banana is turned into a near photo-realistic cucumber, a tomato becomes a tangerine, and even an egg is made into a glistening eggplant. These are actually some of Cho’s “tamer” artworks, as she’s used these same skills with a paintbrush to alter human faces and body parts by adding extra eyes, zippers and mouths. A Kinetic Sculpture Creates the Illusion of a Rotating Head

I’m digging this kinetic sculpture by Swiss artist Markus Raetz (previously) that creates the illusion of a rotating head using a series of silhouettes cut from metal panels. Most of Raetz’s work involves aspects of perception and illusion, more of which you can see here. (via Sploid) 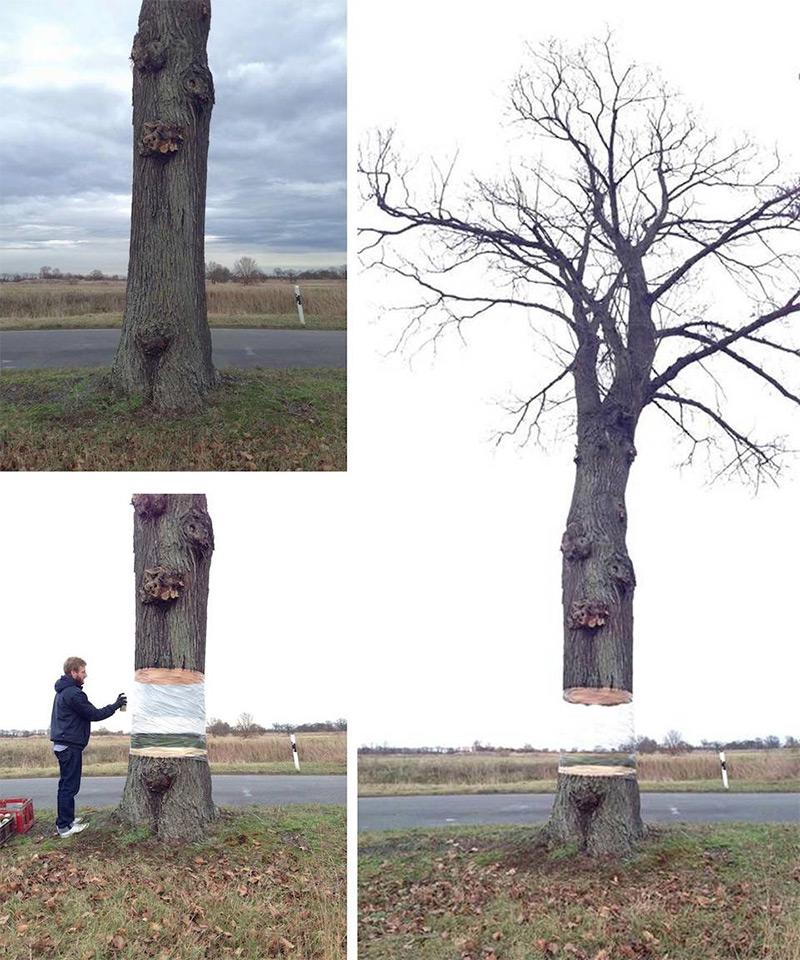 I’m really enjoying this rural intervention (?) created earlier this week by Daniel Siering and Mario Shu in Potsdam, Germany. The duo wrapped a tree in plastic sheeting and then mimicked the background landscape using detailed spray paint strokes to create the illusion of a tree cut in half. It reminds me of this mirror installation by Joakim Kaminsky and Maria Poll. (via Street Art Utopia)

The Impossible Geometry of Fanette Guilloud This series of photos titled Géométrie de l’impossible (Impossible Geometry) from 21-year-old photographer Fanette Guilloud was created earlier this year in locations around Toulouse, Bordeaux and in the French Alps near Lyon. Guilloud employed a method of anamorphic projection similar to the work of Felice Varini to create the illusion of a painting superimposed on an image, when in fact there is no digital trickery whatsoever. The image is actually painted on numerous surfaces at varying depths and only appears like what you see here from a particular vantage point. (via Metafilter)