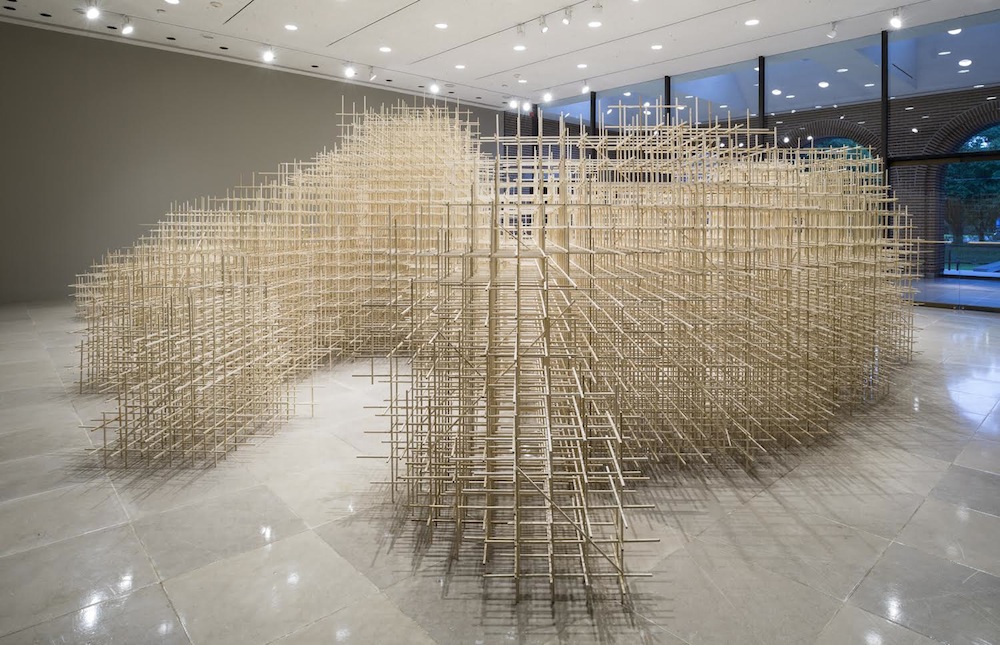 Ben Butler (previously) is fascinated by the complex structures that emerge from simple and delicate processes. This phenomenon can be found in the elaborate systems produced by ant colonies to human cities, small quotidian actions accumulating into overpowering structures. Unbounded, Butler’s installation on display at Rice University Gallery in Houston, Texas, uses this same idea by assembling over 10,000 pieces of poplar wood into a matrix-like structure. This massive arrangement coalesces into an unexpectedly mesmerizing array of grids that stretch to fill the gallery space.

Butler approached this installation, as he commonly does within his practice, without initial sketches or ideas of what he would like the structure to look like. He played with the materials, discovering configurations on the spot. Although the grids within Unbounded were pre-made in his studio, the way they were configured and connected horizontally was all in response to the space. This way of acting in the present ensured that the structure’s outcome would be organic, and not purely responding to a preconceived shape.

Poplar wood was chosen for the installation because of its malleability and abundance, which gave Butler the ability to fiddle with a material that seemed endless. This idea of endlessness also tied into the title he chose for the piece. Butler wanted the piece to have no defined boundary or vantage point, but encourage the audience to walk around and within the structure, discovering it from all angles. Butler received an MFA in sculpture from the School of the Art Institute of Chicago in 2003. He currently lives and works in Memphis, Tennessee and Quogue, New York and has an upcoming exhibition of his sculptures and drawings at The University of Mississippi Museum, Oxford opening in September 2015.

Unbounded will remain on display at Rice University Art Gallery in Houston, Texas until August 28, 2015. (via designboom)