Anti-Gravity Object Modeling: “Mataerial” is a Robot That Draws Sculptures in 3D 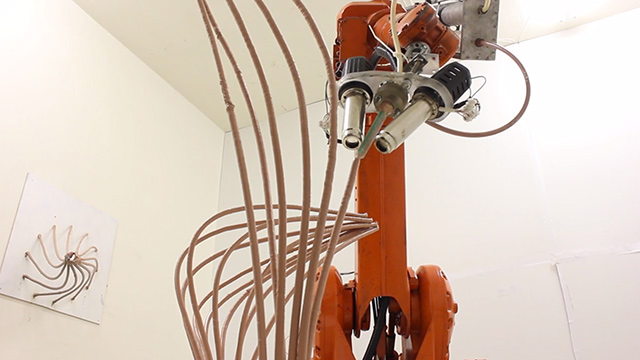 A few months ago we saw the invention of the world’s first 3D printing pen, the 3Doodler, that allows people to draw small objects seemingly out of thin air. Now, a large team of researchers including Petr Novikov, Saša Jokić from the Institute for Advanced Architecture of Catalonia (IAAC) and Joris Laarman Studio, have decided to up the ante. The result of the team’s research is Mataerial, a large robotic tool that can draw three dimensional objects that sprout vertically from the ground or horizontally from a wall, seemingly without regard to the effects of gravity. Where traditional 3D printers print layer after layer of 2D material to build more complex shapes, Mataerial relies on a chemical reaction between two components of a thermosetting polymer to solidify almost instantly as it extrudes from a nozzle. Perhaps the Mataerial team says it better:

One of the key innovations of anti-gravity object modelling is the use of thermosetting polymers instead of thermoplastics that are used in existing 3D printers. The material is cured because of a chemical reaction between two source components with such proportion of extrusion and movement speeds that it comes solid out of the nozzle; this feature makes it possible to print hanging curves without support material.

The device can even alter the color of the material being used to create gradients or other shifts in hue in real time. The team also proposed the creation of much larger structures such as a pavillion that could be constructed on-site with the assistance of multiple Mataerial devices. I for one welcome our new gravity defying, 3D-printing overlords and can’t wait to see where things go next. You can read much more about Mataerial on the team’s website and stay tuned to their Facebook or blog for more developments. (via dezeen) 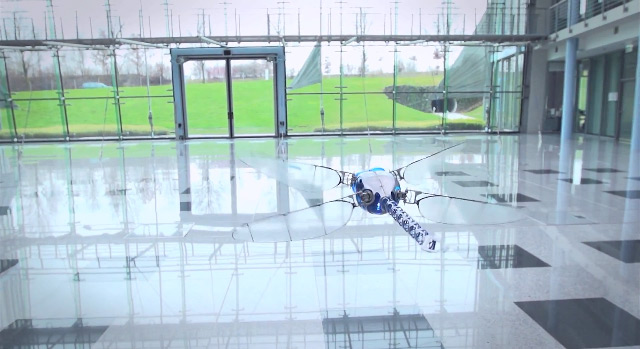