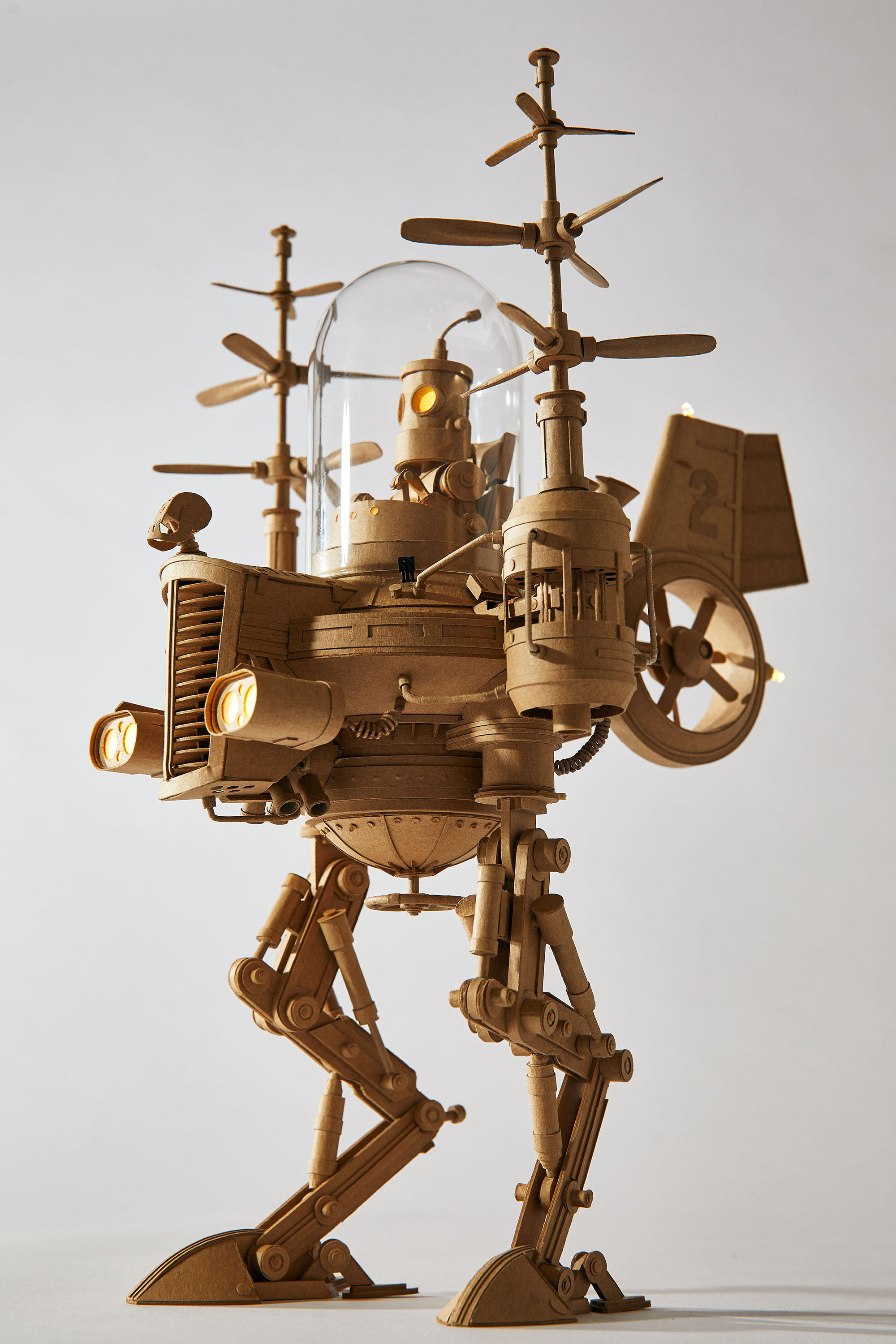 To balance out his working life as a graphic designer focused on 2-D digital projects, Greg Olijnyk creates cardboard sculptures  in his free time. The remarkably refined artworks are made with packaging-grade cardboard and tracing paper, and finishing touches added with LED lighting and glass accessories.

Cardboard’s affordability and malleability, as well as its surprisingly pleasing surface texture and color, have made it the medium of choice for Olijnyk. The designer tells Colossal that each piece comes together organically, and he draws inspiration from sci-fi books and things he finds on Pinterest as he evolves each concept. “Every piece has the limitations and advantages of the cardboard material in mind, how it bends, how strong it will be, etc.,” Olijnyk explains. “The sailing boat sculpture started with the desire to use a pleated, folding effect to simulate water and the rest of the form evolved over the course of a few months.”

As part of his engineering efforts, Olijnyk incorporates movement and articulation. His robot limbs are movable, and wheels rotate. In some of his works, the designer even incorporates solar panels and small motors to activate various components. “Even if, once behind glass, they remain frozen in a pose, I like to know that the capacity is there to bring them to life,” Olijnyk tells Colossal. Here at Colossal we can’t stop jamming out to this animated short from London-based animation studio Animade featuring six bubbly musical robots designed to play themselves. Titled Robot & The Robots, the clip was created as an internal studio project, but you can see more of their commercial work here. If you like this, also check out Michael Marczewski’s Vicious Cycle. (via Vimeo) This past month, Sheffield-based artist Phlegm (previously) revealed his latest mural, a 5-story tall robot on Chapel Street in Melbourne, Australia. The mechanical monster hides a village, or maybe an entire world, beneath its metal scalp, which it reveals while simultaneously dangling a lantern over the homes below. To create the work, Phlegm worked with the building’s mechanics, repurposing a flashing carpark light near the structure’s third floor into a beating heart for his large-scale visitor. You can see more of the muralist’s black and white illustrative pieces from the last year in Manchester, Florida, Oslo, and Toronto, as well as a time-lapse video of his Melbourne-based robot mural, below.