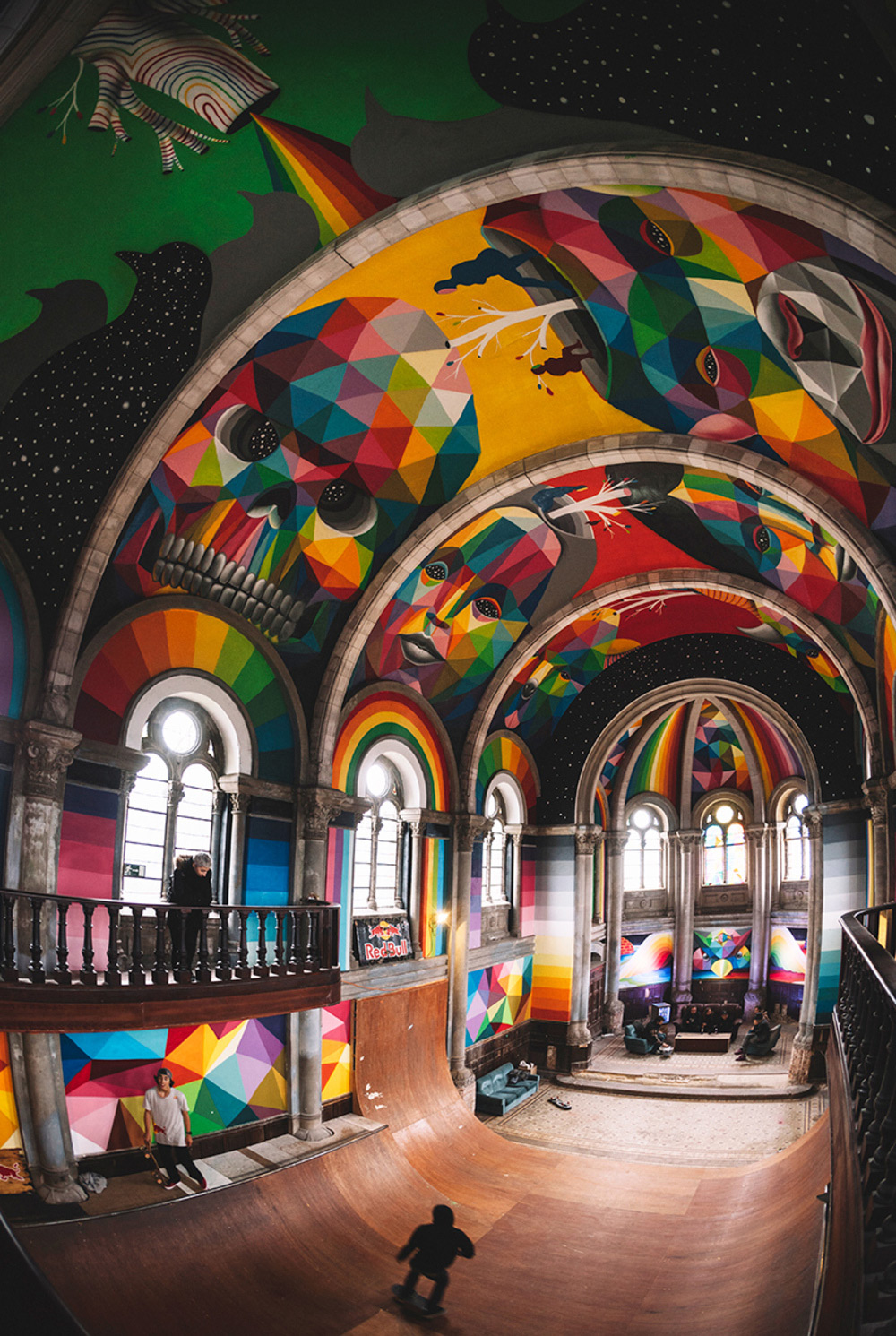 Originally designed by Asturian architect Manuel del Busto in 1912, the church of Santa Barbara in Llanera, Asturias, was abandoned for years and crumbling from neglect. Luckily, a group of enterprising individuals lead by a collective called the ‘Church Brigade,’ with help from online fundraising and Red Bull, the church was salvaged and turned into a public skate park dubbed Kaos Temple.

As if having a skate park inside a beautiful abandoned church wasn’t enough, artist Okuda San Miguel was commissioned to cover the walls and vaulted ceilings with his unique brand of colorful geometric figures. Nearly every flat interior surface is covered with a rainbow of color, illuminated from every side by tall windows, making this a truly special place to skate. Watch the video below to see an interview with Okuda where he talks about his inspiration both for Kaos temple and his other works around the world. (via designboom) 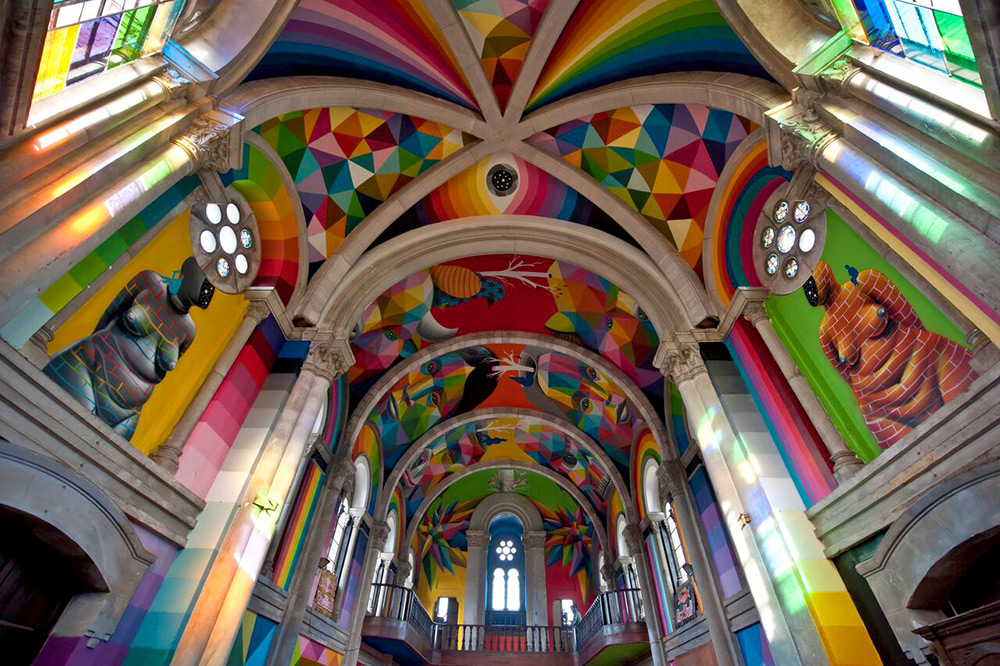 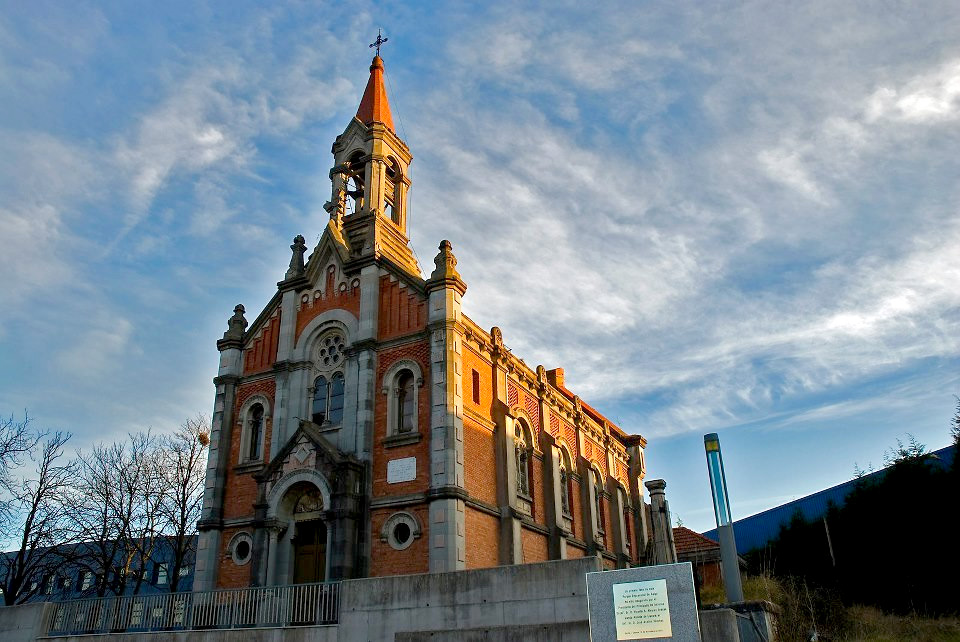 Australian skateboarder Oliver Percovich created the non-profit Skateistan in 2007, a grassroots project that connects youth and education through skateboarding in Afghanistan. The organization, which has since grown to an award-winning international NGO, caught the attention of London-based photographer Jessica Fulford-Dobson and inspired her to visit the program in Kabul in 2012—especially after learning 45% of the students were female.

In Afghanistan skateboarding has spread to become the number one sport for women, as they are forbidden to ride bicycles. Soon after arriving and entering the girl’s world, Fulford-Dobson was accepted by the young Afghan skateboarders. She photographed the girls with natural light, helping to expose their personalities through simple portraits. Within the images you can see the girls’ natural confidence, images that capture the subjects both posed and candidly skating through the indoor facility.

“I met so many impressive women and girls in Afghanistan: a teacher as tough and determined as any man; young Afghans in their early twenties who were volunteering at an orphanage and were passionate about being seen as strong and willing to fight for themselves, rather than as victims of circumstance; and girls who were being educated to be leaders in their communities and who were already thinking carefully about their own and their country’s future,” said Fulford-Dobson.

Fulford-Dobson won 2nd prize in the 2014 Taylor Wessing Photographic Portrait Prize with Skate Girl, 2014 (one of the photographs taken while on location in Kabul) and her exhibition Jessica Fulford-Dobson: Skate Girls of Kabul opens at Saatchi Gallery in London on April 15 and runs until April 28, 2015. You can donate to Skateistan’s program in Kabul as well as other cities here. 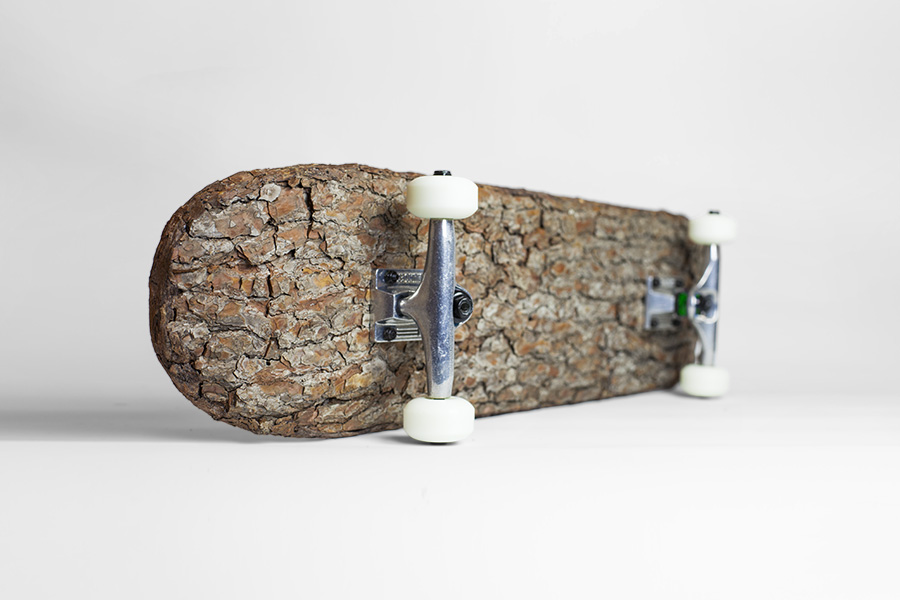 Since a young age, Paris-based artist and designer Christophe Guinet (aka. Mr. Plant) has been obsessed with trees, grass, and seeds, all materials he utilizes in his vegetation-specific practice. One of his most recent projects from earlier this year saw the creation of shoes using flowers and other plant material, which he has since followed up with Natural Skateboarding, a 32″ skateboard built from a panel of tree bark. While it would be fun to imagine a line of bark-based skateboards, “Plant Deck” is a one-off piece meant primarily for display. You can see more of Guinet’s work here. (via Fubiz)