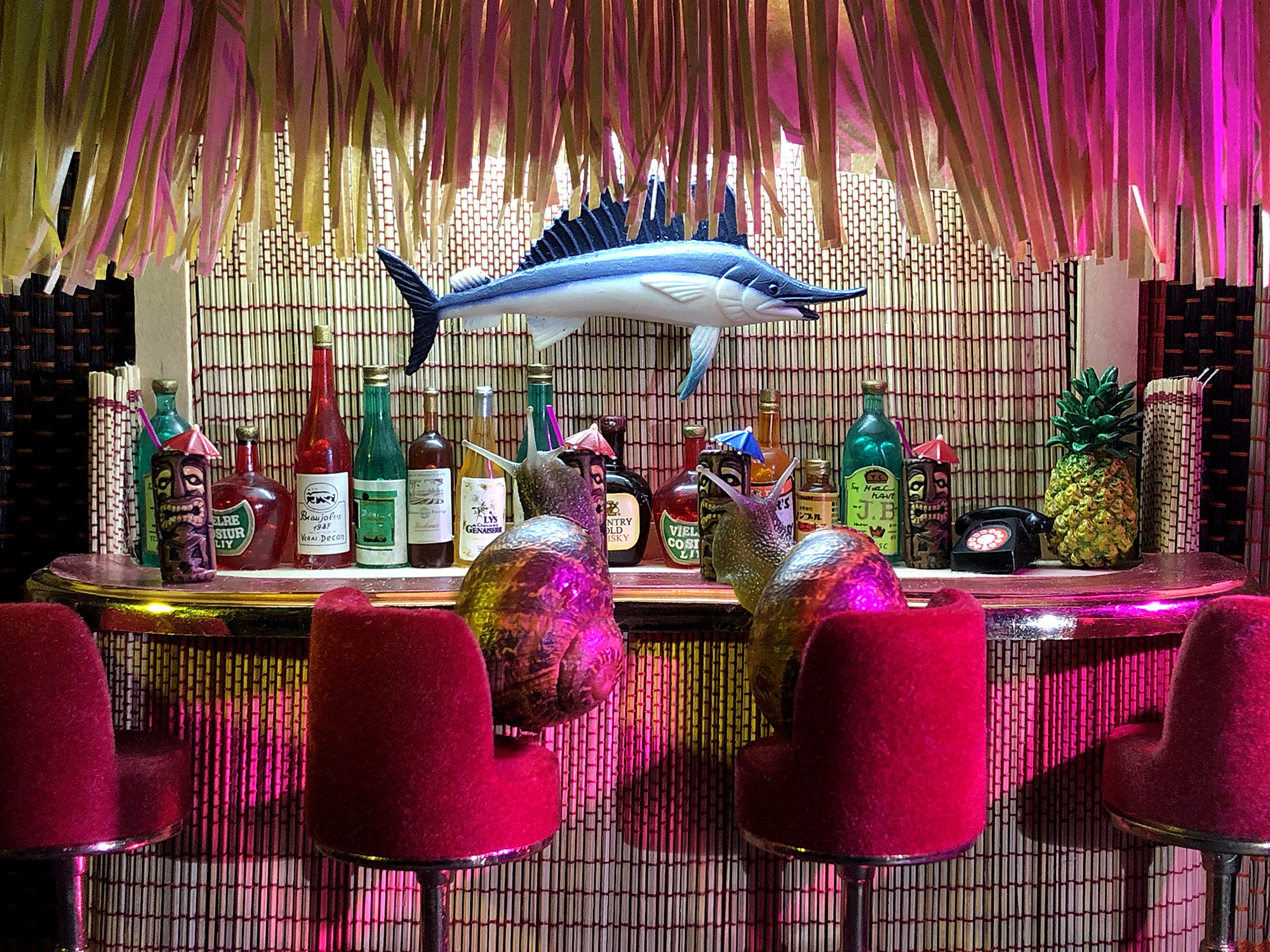 All images © Aleia Murawski and Sam Copeland, courtesy of Broccoli, shared with permission

Snails, they’re just like us! Teeming with cinematic photos, a new book pulls back the curtains on the slimy critter’s vibrant social lives, as they slip out of their shells for shopping, shenanigans, and a night on the town. Snail World: Life in the Slimelight chronicles the quirky adventures and nostalgic miniature scenes occupied by the tiny creatures, which Illinois-based duo Aleia Murawski and Sam Copeland (previously) have arranged for years. Paired with an array of puns, the playful photographs feature the critters bellying up to a bar, sliding across a Twister mat, and sipping bubble tea.

Grab a copy of Snail World: Life in the Slimelight from the women-led press Broccoli, and follow the intrepid creatures on Murawski’s Instagram. 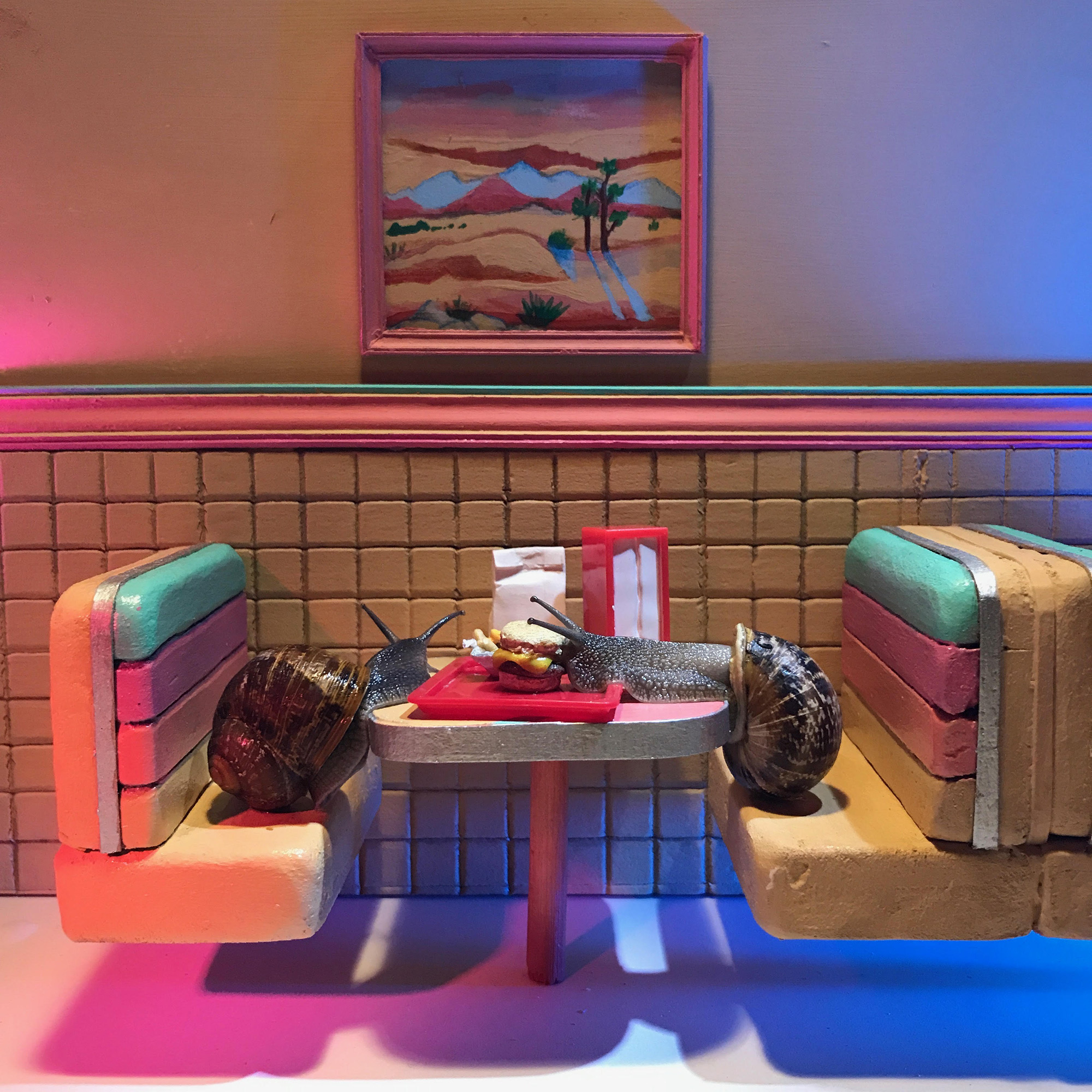 All images © Aleia Murawski and Sam Copeland, shared with permission

Illinois-based Aleia Murawski and Sam Copeland have a knack for creating miniature—and slimy—worlds just big enough for their tiny acquaintances to glide through. The creative duo is known for constructing realistic domestic settings featuring plastic covered furniture and a messy painting studio occupied by snails for its stills and short films. Now, though, the artists are pushing the critters beyond their comfortable homes for a fun night out. The snails are shot sliding up to a limo, basking under the glimmer of a disco ball, and gobbling up a cheeseburger in a quaint diner.

“It is a really fun challenge for us to come up with these scenes and to find different ways to execute it so it feels believable and lived in, despite its fabrication,” Murawski told Colossal. The bowling scene utilizes a ball controlled by a magnet that the creators shot frame-by-frame as it moved along the alley. That set took multiple days to get right, she says, from using coffee stir sticks to build out the floor to employing a vacuum-foaming machine to construct each chair.

Murawksi says the duo’s process is “very rooted in play and experimentation. We are always looking for new ways to construct different elements in a scene and trying varied techniques to create depth and motion in our work.” To keep up with the snails’ shenanigans, head to Murawski’s Instagram. You can even buy a print of their slippery adventures to add to your collection. The pair’s collaborative worlds are used for still images and short films. Murawski’s favorite part of shooting with snails is seeing how they interact with their sets, while also learning how to specifically direct the slow moving creatures, she explains on her Instagram. One way she and Copeland inspire certain movements while filming is by positioning cucumbers behind the sets’ tiny objects, which encourages their subjects to inch towards the hidden vegetables. The duo used this technique in their recent music video project for Bully, in which they built out an entire neighborhood and house set to outline a day-in-the-life of an extra sluggish snail.

For more slime-centered work, including this video of a motorcycle-riding snail, visit Murawski’s Instagram. You can purchase posters of the collaborative photographs on Big Cartel. (via It’s Nice That) For more than 20 years photographer Daniel Ranalli has been actively collaborating with the ecology of Cape Cod, with one of his most collaborative projects being his Snail Drawing series. The works each contain two images, the first capturing the snails in a simplified pattern of Ranalli’s choosing on the beach, and the second showcasing the ways the snails have decided to move out of this neatly formed configuration. The second image allows the viewer to see the trace of the snail’s movement in the sand, the small bodies slowly scattering away from center.

“The best pieces depend on a certain degree of randomness for their success,” said Ranalli. “I tend to think of the snail pieces as a metaphor for the order we establish in our lives, and how the element of chance enters in to affect the result—regardless of how much we attempt to structure it.”

Some of Ranalli’s work will be exhibited with Laurence Miller Gallery this weekend at Classic Photographs Los Angeles from January 21-22. You can see more of his snail series as well as other gesture-based photography (like his Erased Chalkboard series) on his website. (via La Boite Verte) 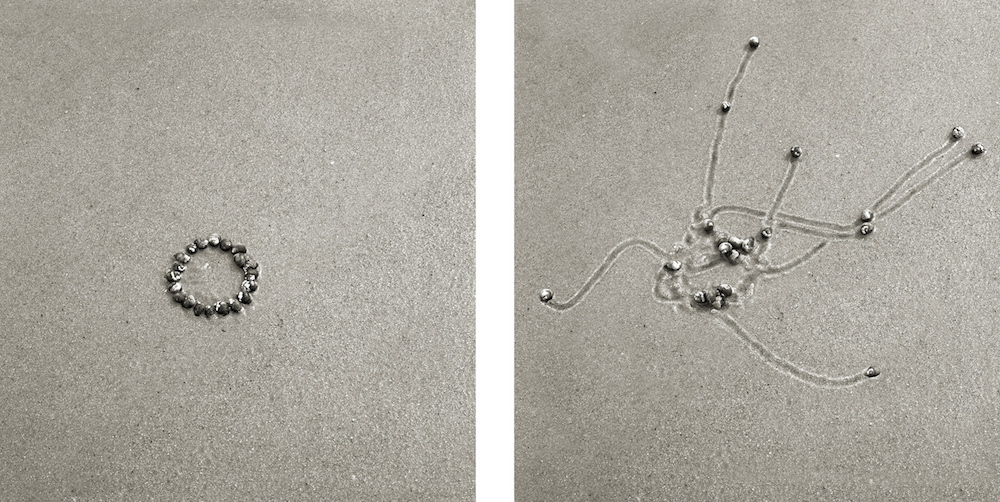 Croatian artist Lonac recently finished work on this trio of snails painted on a dilapidated building in his hometown of Zagreb. Titled “Xenophora,” the mural depicts three photorealistic carrier snails pinned to the edges of the old building creating a compelling contrast between old and new. The piece was created for the Rendezvous Festival and you can see more views and process shots on his website. (via StreetArtNews)