After splitting from the nighttime cityscape, a drone descends into Bryant Lake Bowl in a fast-paced clip that rolls through the classic Minneapolis venue. The camera-strapped device trails a ball as it barrels down the lane and then winds past the gutters and into the bar and theater, picking up competitive banter and diving in the otherwise-unseen abyss that is the ball pit. Taken by Jay Christensen of Rally Studios, the footage is evidence of both how far technology has advanced in recent years and the adept piloting skills required to capture such a striking ode to the beloved alley and the game itself. (via Kottke) 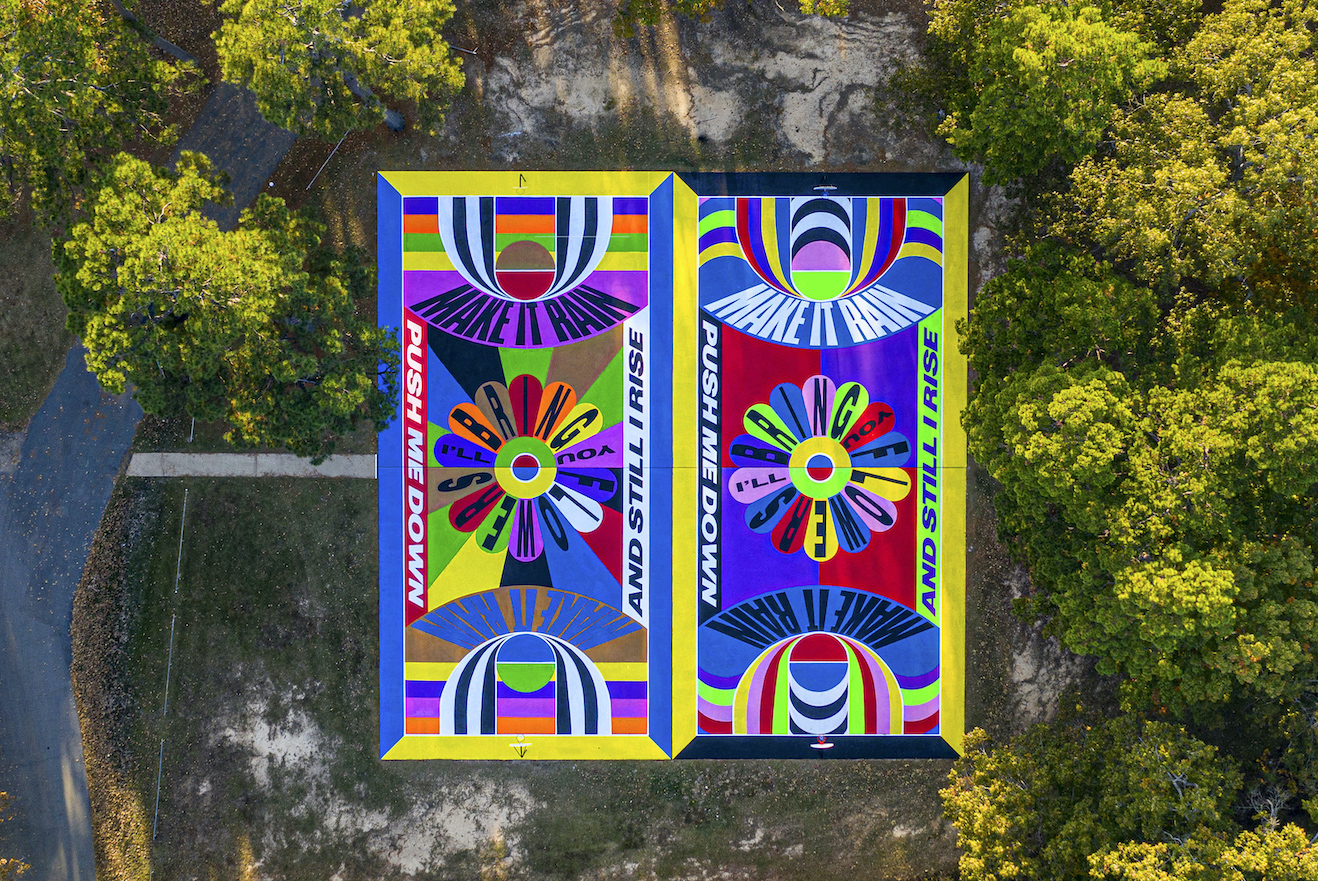 All images © Justkids, shared with permission

Tucked into the verdant landscape of Martin Luther King Jr. Park in Pine Bluff, Arkansas, are two dramatically altered basketball courts primed for play. Commissioned by the women-led curators of Justkids (previously) and OZ Art, the public project was conceived by London-based artist Lakwena, who transformed the outdoor spot into a lively area with her trademark typographic murals.

Basketball jargon covers the patterned court with an arched “Make it rain” demarcating the three-point lines. Creating under a larger theme of unity, Lakwena also referenced iconic poet Maya Angelou, who lived in the state throughout her life. “Bury me down / still I rise” lines the perimeter of the court, with Lakwena’s title of the work, “I’ll bring you flowers,” spelled out on multi-color petals at the center circle.

This community-centered project is the artist’s second in Arkansas and follows a 2017 work at Sebastian County’s Juvenile Detention Center in Fort Smith. Lakwena writes that “I’ll bring you flowers” is an extension of that piece as it looks “at growth and blessing in spite of adversity.” She expands on the idea:

I was really excited to work in a place with a largely Black demographic. It was nice to make an artwork for people that I have a connection to in that respect, especially at what feels like a very significant time for the Black community. The piece is called “I’ll bring you flowers.” Flowers are often used as a way of greeting, paying respect and honor people, and I wanted to honor the community in Pine Bluff.

For more of Lakwena’s vibrant pieces, head to Instagram. Check out this opulent kintsugi court and another angular mural for similarly sports-centered artworks. 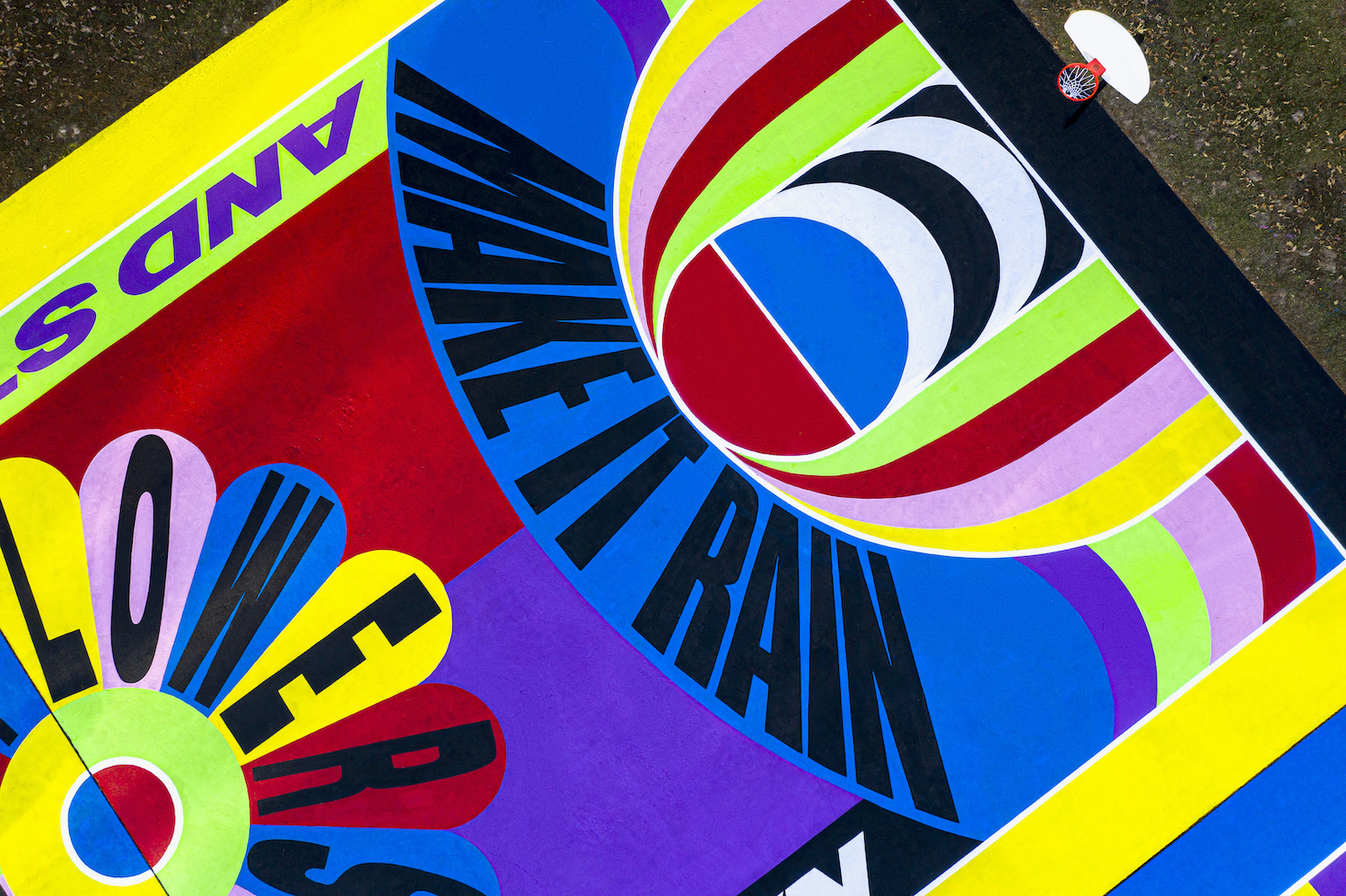 All images by Shafik Kadi and © Victor Solomon, shared with permission

Celebrating the restorative qualities of sports and basketball’s return this past week, Victor Solomon mended a deteriorated court in South Los Angeles through the ancient art of Kintsugi—the Japanese method of repairing broken pottery by using metallic substances to mend the fractures. The artist filled cracks in the cement with gold-dust resin, highlighting the years of use “to accentuate the healing as a formative part of its journey,” he says. “Sport can entertain, inspire, and distract, but more apropos than all, the platform of sport can help us heal.” Titled “Kintsugi Court,” the gilded installation has similarly lavish backboards and hoops.

The restored court is just one of Solomon’s explorations into the sport and the ways it intersects with luxury. For more of his embellished projects, head to Instagram. (via The Kids Should See This) 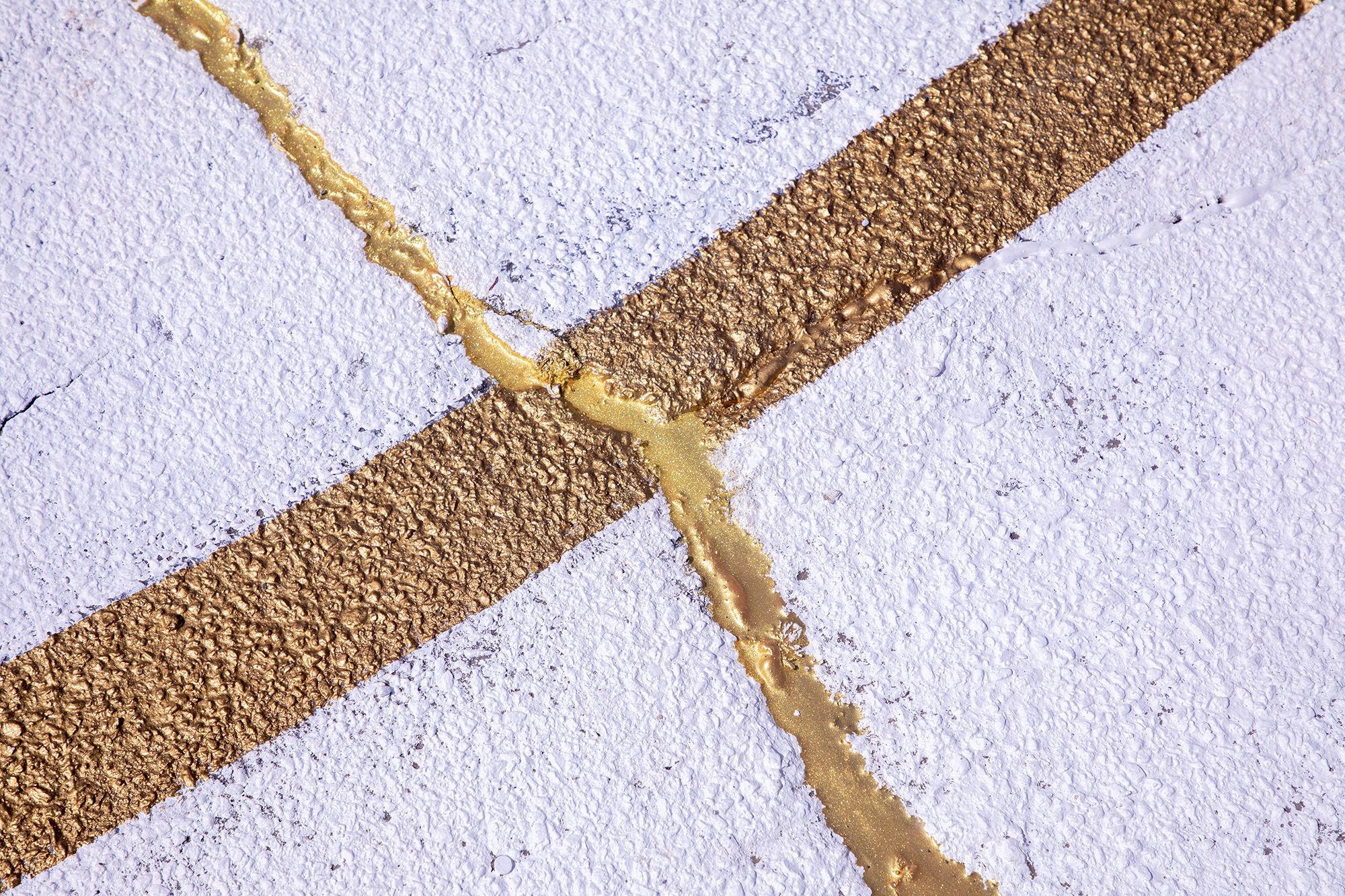 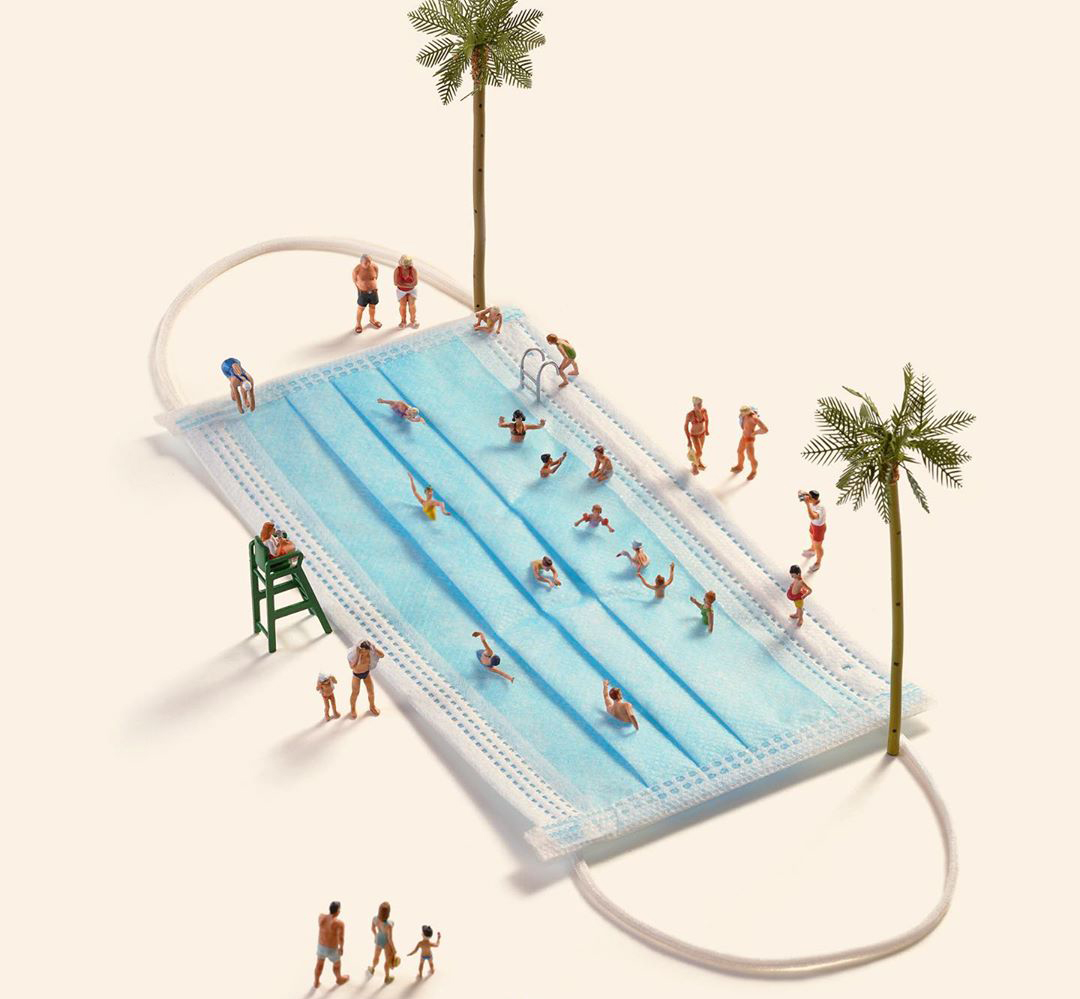 In the time of COVID-19, disposable face masks, toilet paper, and other essentials are synonymous with safety, precaution, and staying indoors. But in Tatsuya Tanaka’s ongoing Miniature Calendar series, the everyday items are subverted to create the tiny sets of outdoor adventures. A folded mask serves as a small tent, toilet paper descends from a wall holder as a snowy ski hill, and a thermometer outfitted with wheels transforms into a speedy racecar. For more of the miniature scenes from the Japanese artist and photographer (previously), head to Instagram, where he publishes a new piece daily. (via Lustik) 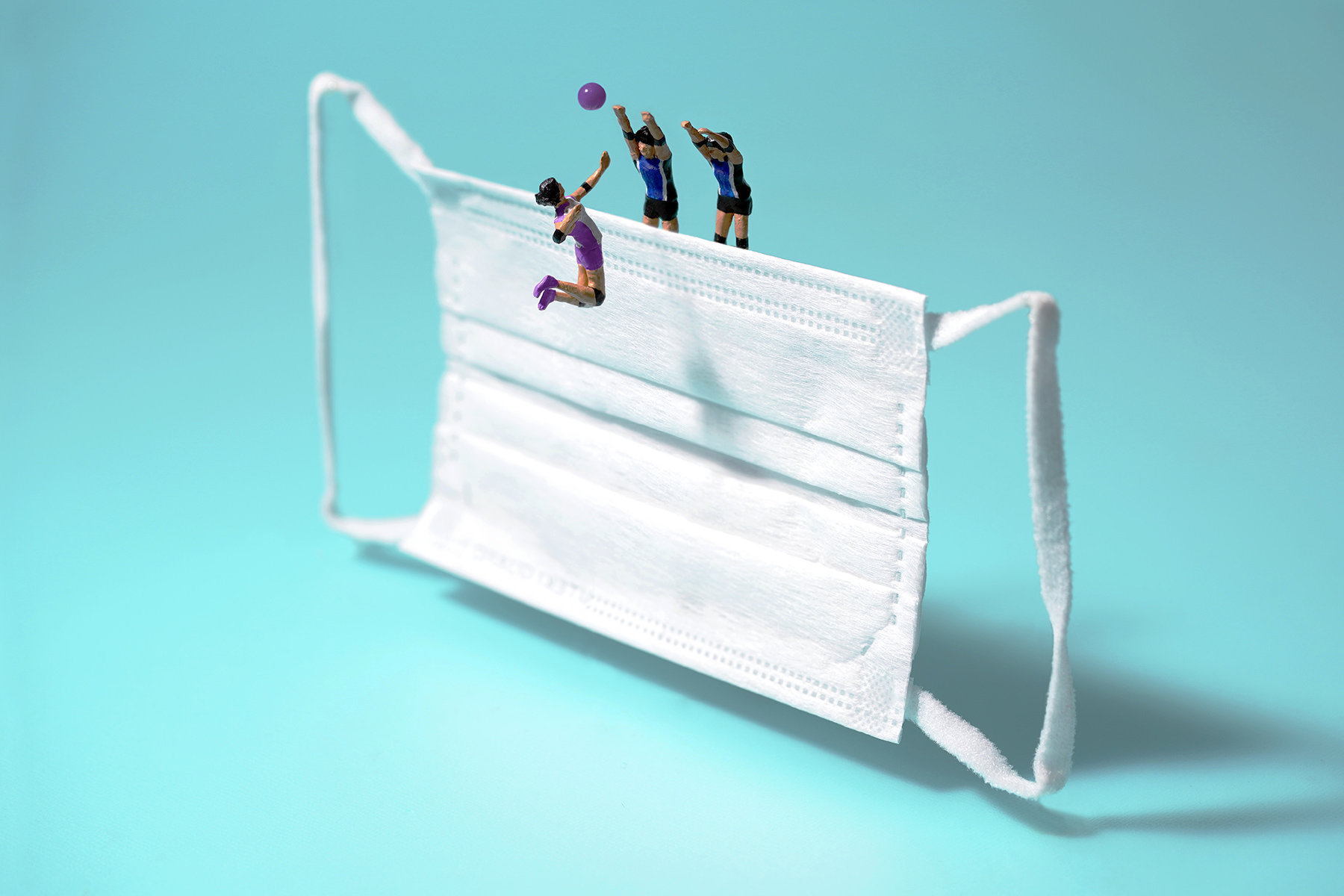 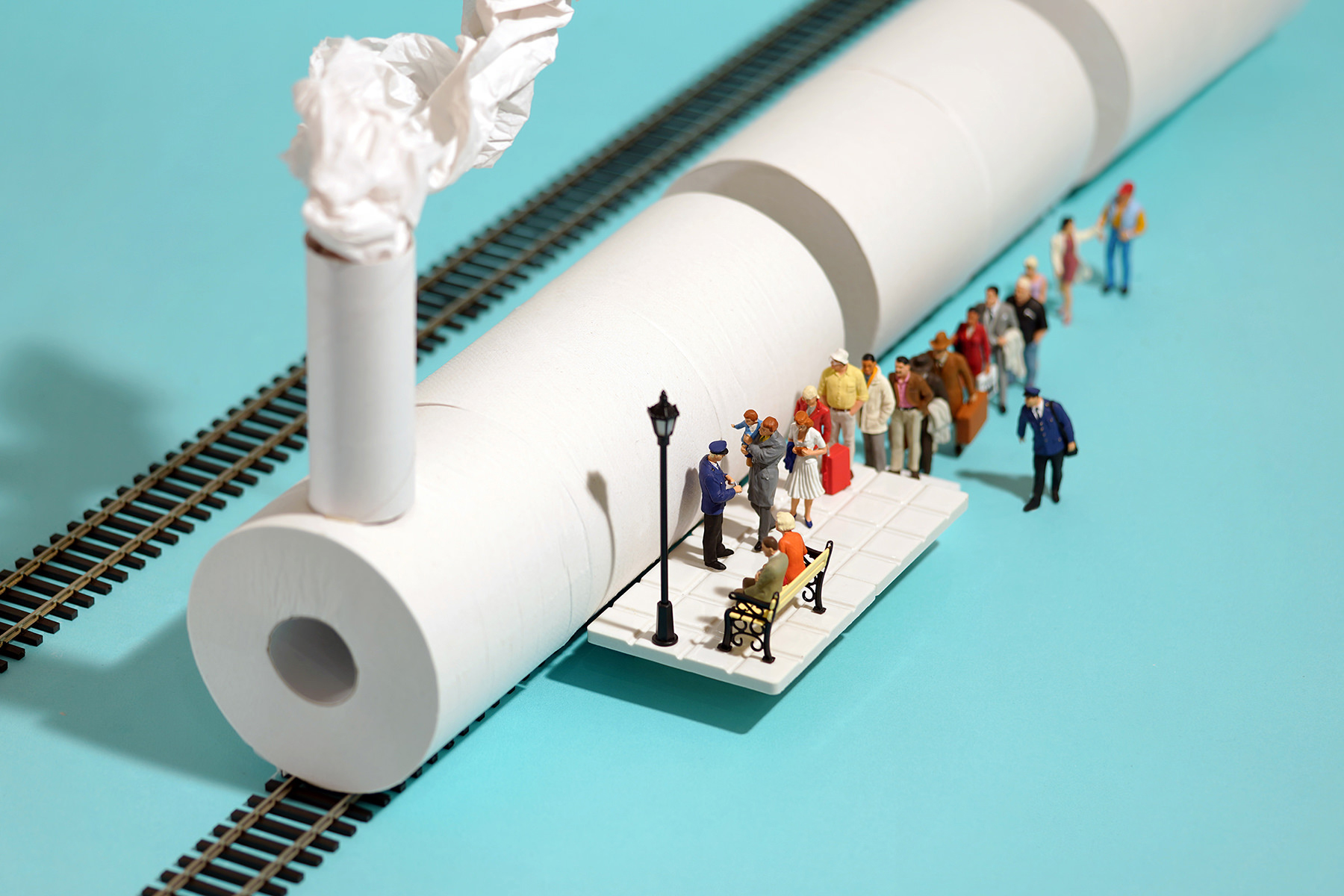 Although devotees of the Olympic games will have to wait until 2021 for the next round of competitions, Donato Sansone channels the same excitement, energy, and displays of strength into an extravagant new mashup. A second iteration of his previous video by the same name, Sansone’s latest motion sequence is comprised of short clips of athletes completing tucks, dives, and pikes. Each bit of footage seamlessly blends into the next, making the competitors appear to be joined in a single, nearly minute-long jump.

For more of Sansone’s Rube Goldberg-esque sequences, head to Tumblr and Vimeo.