The Struggle to Right Oneself: Kerry Skarbakka Photographs Himself in Suspended Peril 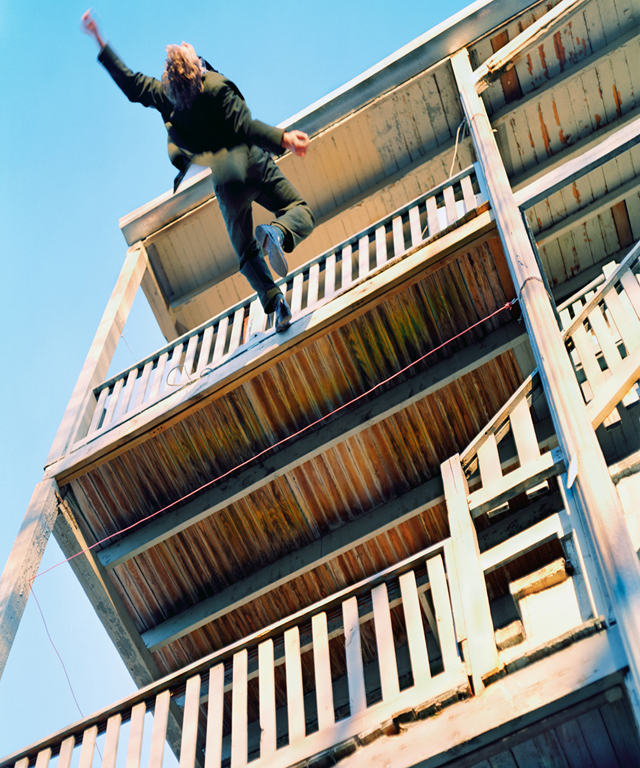 In his photographic self-portrait series Struggle to Right Oneself, artist Kerry Skarbakka captures himself in moments of suspended peril: falling from trees, tumbling head over heels in painfully precarious falls, slipping nude in the shower, or teetering on the edge of a fateful leap from a railway bridge. In his artist statement Skarbakka references philosopher Martin Heidegger’s description of human existence as a process of perpetual falling, and the responsibility of each person to catch ourselves from our own uncertainty. He continues:

This photographic work is in response to this delicate state. It comprises a culmination of thought and emotion, a tying together of the threads of everything I perceive life has come to represent. It is my understanding and my perspective, which relies on the shifting human conditions of the world that we inhabit. It’s exploration resides in the sublime metaphorical space from where balance has been disrupted to the definitive point of no return. It asks the question of what it means to resist the struggle, to simply let go. Or what are the consequences of holding on?

Skarbakka says that he utilizes special climbing gear and other rigging to achieve each shot, but the final images are truly convincing if somewhat ambiguous. This too is on purpose, as the images are meant to leave the viewer questioning. Do they suggest we can fly? Do we fall? What happens when we land? See many more shots from the series over on his website. All images courtesy the artist.