All images courtesy of Cal Lane and C24 Gallery, shared with permission

Using car hoods, shovels, and oil drums as her base, Canadian artist Cal Lane cuts generic lace motifs found on the shelves of mass-market retailers. Her quotidian designs adorn tools and commodities typically associated with masculinity, warping both assumptions about gender and the limits of construction and craft. “I am more interested in the dialog between the object and the image, not so much the lace pattern specifically. I didn’t want the work to necessarily be decorative but to be about decoration and the relationship we have with it,” she shares.

A former welder, Lane is broadly interested in the possibilities of materials, and it’s “the industrial, man-made structure, masculine, modernist quality of steel that I am attracted to. I see steel as a metaphor for confrontation, a thing that represents the walls put up by the society I was born into,” she shares. Her body of work, which includes a series of Industrial Doilies, is steeped in contradiction and an ability to defy expectations, which manifest as delicate filigree inscribed in sturdy hunks of metal. “Steel feels like the perfect material to carve into to create the contrasts and conflicts that I myself struggle with,” the artist says.

Many of the plasma-cut sculptures shown here are part of In Her Space, which is on view through March 3 at C24 Gallery in New York. The exhibition includes some of Lane’s more recent pieces, including the collection of shovels and “Astute Class.” A miniature marine vessel, the submarine features a pattern Lane designed that’s comprised of thale cress flowers, a species that “had been bioengineered by Canada and The Netherlands as a bomb-sniffing flower…the flowers grow, but if there is a landmine beneath, the color of the flower changes,” she says. “I thought it was so beautiful, brilliant, and poetic.”

In addition to In Her Space, Lane will show a new series of paintings on queen mattresses this fall at Art Mûr in Montreal. Until then, head to Instagram to see more of her process. A Huge Submarine Bursts through the Streets of Milan 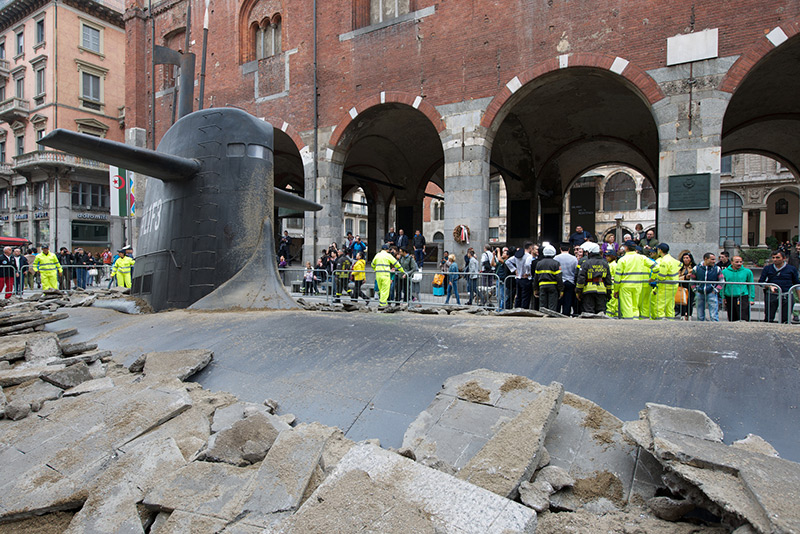 As part of an absurdly clever advertising campaign orchestrated by ad agency M&C Saatchi Milano for insurance firms Europ Assistance IT and Genertel, a giant submarine was installed near the city center as if it had suddenly burst through the street. The carefully orchestrated stunt which unfolded on October 1st was complete with a live reenactment meant to reinforce the idea of safeguarding yourself and possessions against unforeseen events. Read more over on Designboom. All images courtesy M&C Saatchi Milano. (via It’s Nice That)