Time can be a difficult variable to visually convey in still photography, both the length of time an exposure takes or a series of photos meant to depict the passage of time can be somewhat ambiguous without a written explanation. In his latest series, Time is a dimension, Singapore-based photographer Fong Qi Wei (previously) explores just that idea by shooting landscapes from a stationary position over a 2-4 hour period and then digitally slicing the images to create a layered collage. He shoots at sunset or sunrise to obtain a wide variation in light and then carefully cuts each image to reveal incremental timeframes. He explains:

The basic structure of a landscape is present in every piece. But each panel or concentric layer shows a different slice of time, which is related to the adjacent panel/layer. The transition from daytime to night is gradual and noticeable in every piece, but would not be something you expect to see in a still image.

Similarly, our experience of a scene is more than a snapshot. We often remember a sequence of events rather than a still frame full of details. In this series, I strive to capture both details and also a sequence of time in a single 2 dimensional canvas. I hope it gives you pause and reconsider what you experience versus what you shoot with your next camera phone.

You can see many more examples on his website, and read more about his process right here.

Smeared Skies Made from Hundreds of Stacked Photographs by Matt Molloy 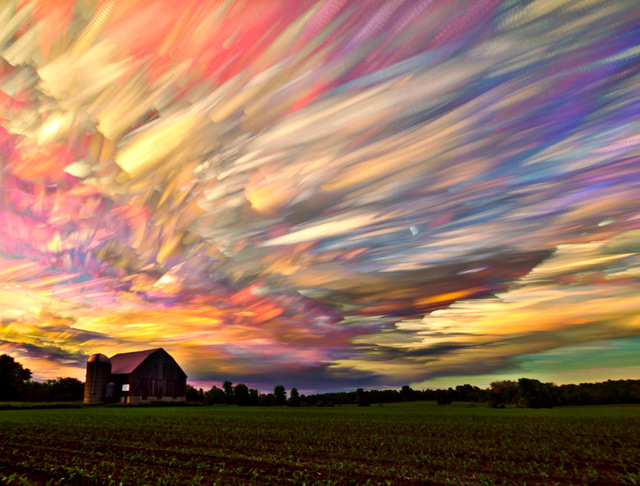 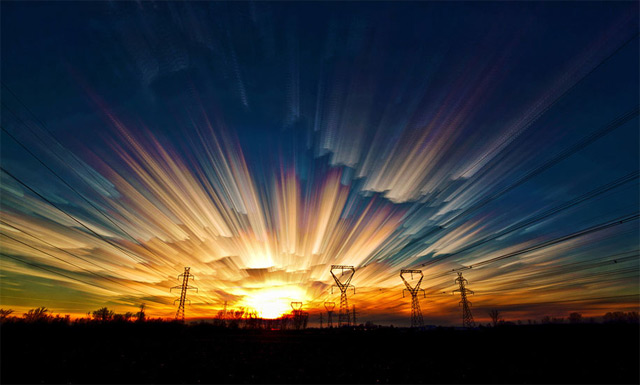 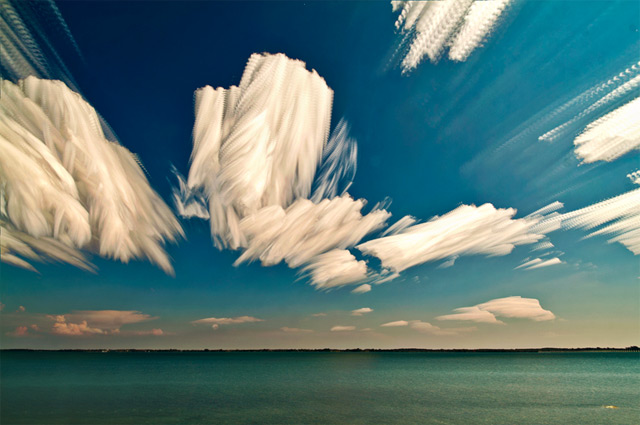 Living on the shore of Lake Ontario, just east of Toronto, photographer Matt Molloy has daily encounters with brilliant sunsets and cloudscapes that he’s been photographing for over three years. One day he began experimenting with time-lapse sequences by taking hundreds of images as the sun set and the clouds moved through the sky. Molloy then digitally stacked the numerous photos to reveal shifts in color and shape reminiscent of painterly brush strokes that smeared the sky. You can learn more about his “timestack” technique over at Digital Photo Magazine and prints are available here. (via bored panda)