Water Women: Swimming Figures Dip in and out of Water by Sonia Alins In this collection of illustrations titled Dones d’aigua (water women), Spanish artist and illustrator Sonia Alins depicts several women immersed almost completely underwater, just a head or foot poking out from the uncertain depths of cloudy liquid. A haunting tension emerges not only from the clever split view created by utilizing translucent paper to mimic water, but also from the slightly ambiguous situation of the figures. It’s not always immediately clear if the women are swimming or drowning. You can follow more of Alins’ work on Instagram or Behance, and a few of her pieces are available as prints. (via Supersonic) 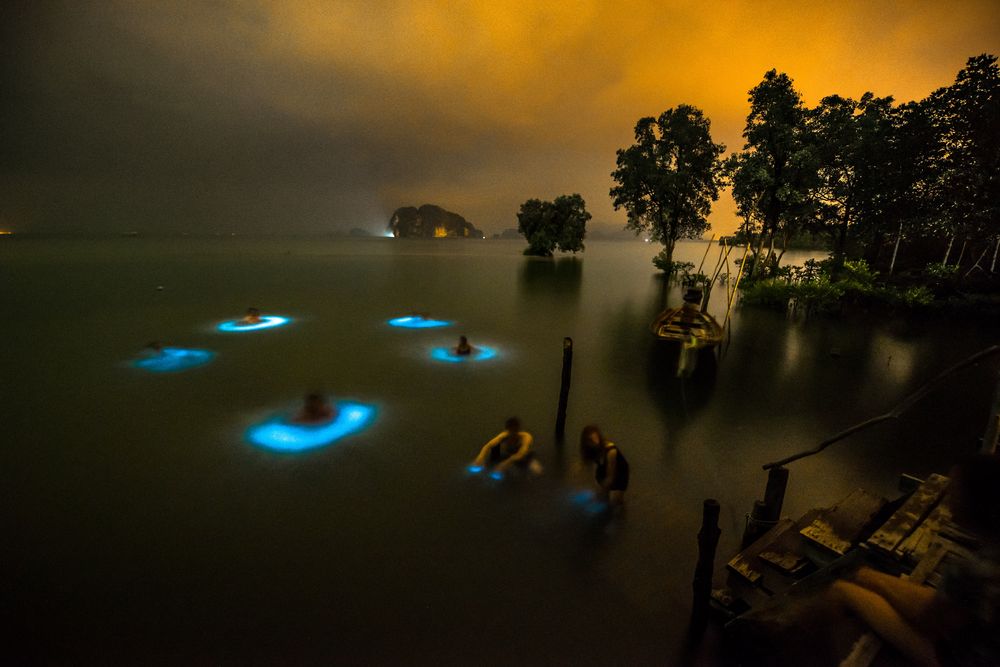 When photographer Will Strathmann was recently in Krabi, Thailand, he decided to head out during a full moon to witness the effects of bioluminescent phytoplankton in the nearby Andaman Sea. His curiosity was rewarded by a small group of swimmers who were causing the microscopic organisms to light up by agitating the water around them. The result was this amazing shot. You can see more of Strathmann’s photography on Instagram. (via NatGeo) Here’s a lovely series of swimming figures painted by Colombian illustrator and painter Pedro Covo. Covo splendidly captures the obscuring nature of water as splashes are rendered in frenetic splatters of paint, and the sinuous lines of bodies seem to evaporate into brush strokes. The artist most recently exhibited at Río Laboratorio and has also worked as an illustrator for the Walt Disney company. You can see a bit more over on Instagram and at the Colagene Creative Clinic. In a departure from his large-scale color field yarn installations, Minnesota-based artist HOT TEA is back in New York and was given the opportunity to transform a swimming pool on Roosevelt Island with whatever colors he saw fit. Apparently he took the ambitious approach and decided to use them all, spread between 120 gallons of paint.

The private commission produced by K&CO and Pliskin Architecture is called Asylum, a title the artist chose “because the act of creating it pushed my mental and physical endurance so far that I wasn’t sure I could complete the task,” he shares with Brooklyn Street Art. For almost a century starting in 1839, the island was also home to the New York City Lunatic Asylum. The vibrantly luminous gradients that define the area around the pool contrast starkly when viewed against the rest of the surrounding landscape, creating a surprising oasis of color.

The pool, located in Manhattan Park, opens for swimming Memorial Day weekend. You can read a bit more about it on Brooklyn Street Art. 5 Mètres 80: An Absurd Animation Depicting a Herd of Giraffes Leaping Off a High Dive by Nicolas Deveaux

OK, this is ridiculous, but in the best way possible. Spending too much time describing this short film by French animator Nicolas Deveaux would ruin it, so it’s probably best to just watch it. Created over a period of 1.5 years 5 Mètres 80 is a follow-up to a shorter animation he made 10 years ago about an elephant on a trampoline. Deveaux is widely known for his realistic animation of animals for both film and commercials, many more of which he shares on Vimeo. 5 Mètres 80 has toured film festivals around the world since 2013 picking up numerous awards and nominations including the Best in Show Award at SIGGRAPH Asia. (via Vimeo Staff Picks)