For the past few months Portuguese artist Bordalo II (previously) has been stalking the streets of Lisbon looking for heaps of trash. Using mounds of discarded plastic sheeting, old tires, shingles, and tangles of electrical cable, he carefully repositions everything before spray painting it to resemble animals and insects. You can see more from the ongoing series on Facebook. 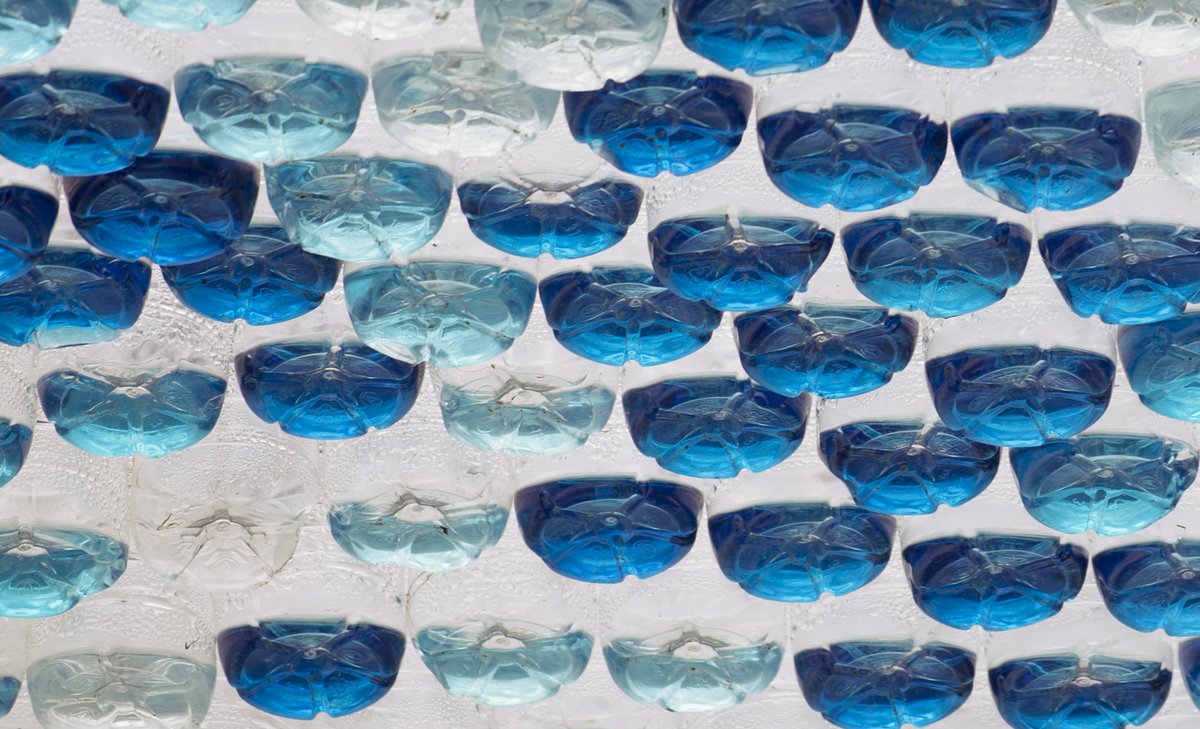 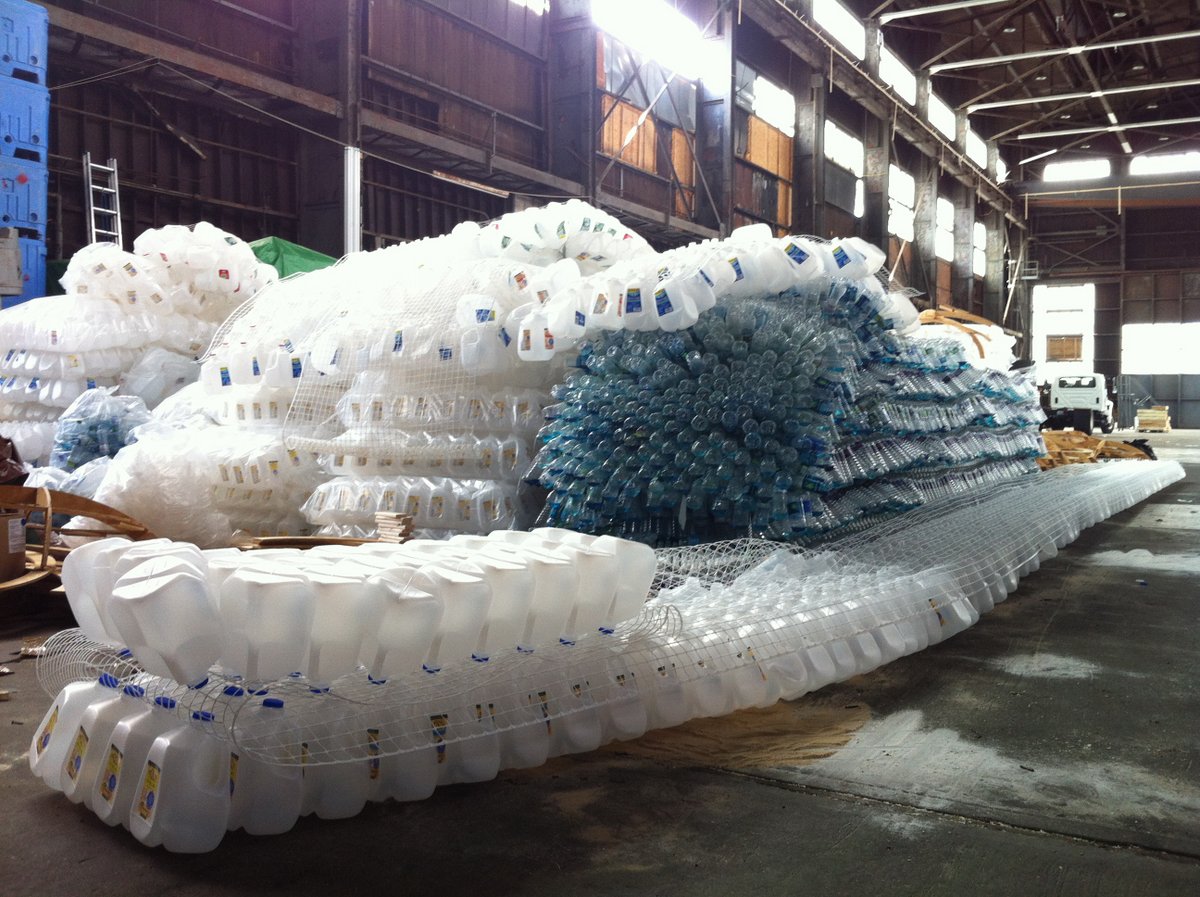 If you visited Governor’s Island in New York last summer you most certainly saw the billowing, cloud-like structure that sits in the middle of the lawn. And if you’re anything like my kids you probably dashed up to it to see exactly what thing was. But it’s not until you get up close that you realize it’s made from many, many plastic bottles stringed together. “53,780 used plastic bottles,” says designer Jason Klimoski, “the number thrown away in NYC in just 1 hour.” Klimoski and his team at STUDIO KCA collected the bottles – a combination of milk jugs and water bottles – and lashed them together to create “Head in the Clouds,” a pavilion people can walk into, sit inside, and contemplate just how much plastic is thrown away every day.

The structure, however, was temporary and the team is now looking for its next home. If you’re interested in having this in your back yard get in touch with the designers. Philadelphia artist Kim Alsbrooks recreates historical oil portraits on flattened beers cans and fast food containers. Titled “My White Trash Family” the series was conceived while Alsbrook was living in the south and found herself grappling with prevailing ideas of class. She shares via a statement about the project:

The White Trash Series was developed while living in the South out of frustration with some of the prevailing ideologies, in particular, class distinction. This ideology seems to be based on a combination of myth, biased history and a bizarre sentimentality about old wars and social structures. With the juxtaposition of the portraits from museums, once painted on ivory, now on flattened trash like beer cans and fast food containers, the artist sets out to even the playing field, challenging the perception of the social elite in today’s society.

Filmmaker Jesse Brass recently caught up with Alsbrook to interview her for his Making Art series. Watch it above. 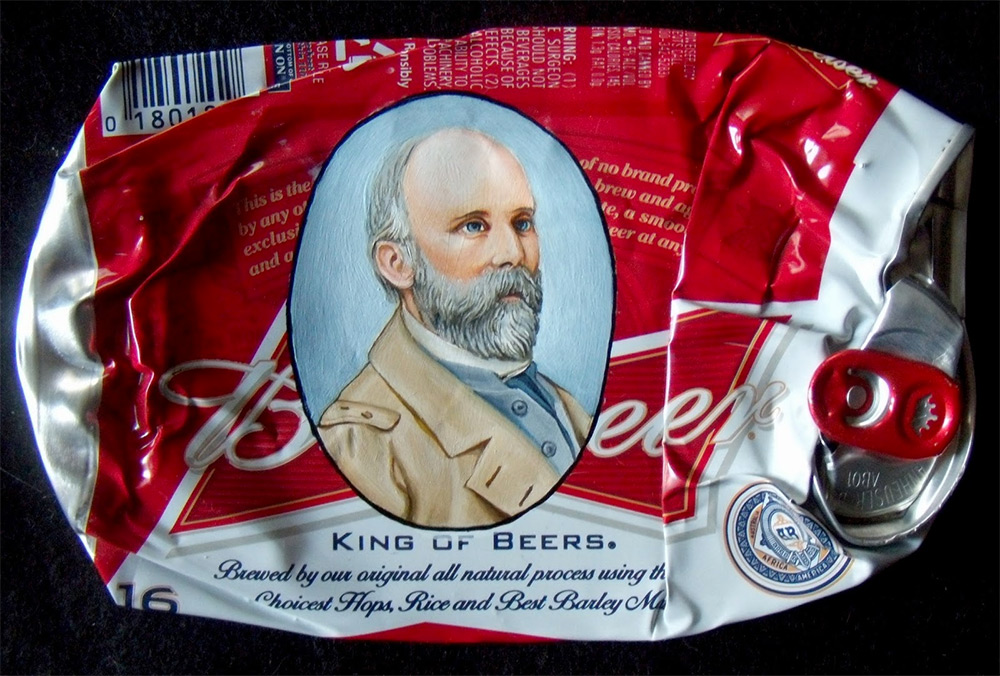 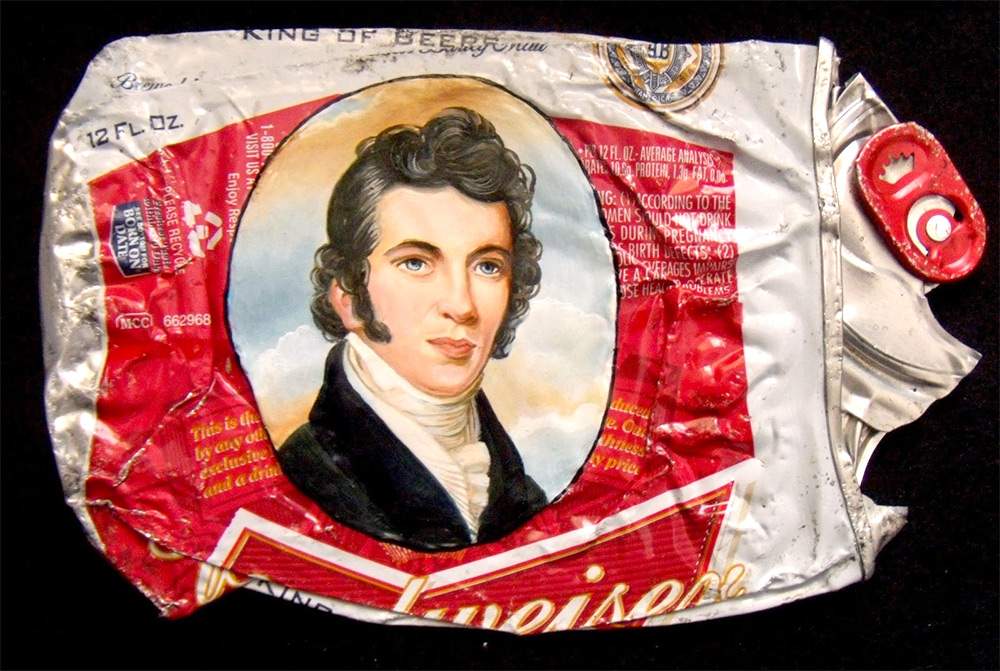 File this under I had no idea this existed. During the early 20th century residents of Fort Bragg, California chose to dispose of their waste by hurling it off the cliffs above a beach. No object was too toxic or too large as household appliances, automobiles, and all matter of trash were tossed into the crashing waves below, eventually earning it the name The Dumps. In 1967 the North Coast Water Quality Board closed the area completely and initiated a series of cleanups to slowly reverse decades of pollution and environmental damage. But there was one thing too costly (or perhaps impossible) to tackle: the millions of tiny glass shards churning in the surf. Over time the unrelenting ocean waves have, in a sense, cleansed the beach, turning the sand into a sparkling, multicolored bed of smooth glass stones now known as Glass Beach. The beach is now an unofficial tourist attraction and the California State Park System has gone so far as purchasing the property and incorporating it into surrounding MacKerricher State Park. (images courtesy digggs, matthew high, meganpru, lee rentz and linked to sources. via kuriositas)

Thrown to the Wind

Thrown to the Wind is a 36-foot tall (11-meter) tornado of plastic garbage by Wang Zhiyuan who lives and works in Beijing. More here and here.