It’s fascinating to know while looking at these desaturated images of the Czech Bohemian Forest that the person who shot them, Cologne-based photographer Kilian Schönberger, is color blind. One can’t help but wonder if the condition leads to a greater appreciation for light and composition present in these mysterious, fog-soaked landscapes. That said, these particular monochromatic photos from Schönberger’s Cloud Forest series are more of an exception, as he generally shoots in full color, but the results are equally as magical. You can see much more of his work over on Facebook and Behance. (via Faith is Torment) Chinese artist Zheng Chunhui recently unveiled this exceptionally large wooden sculpture that measures some 40 feet (12.286) meters long. Four years in the making, the tree carving is based on a famous painting called “Along the River During the Qingming Festival,” which is a historical holiday reserved to celebrate past ancestors that falls on the 104th day after the winter solstice. On November 14th the Guinness World Records arrived in Fuzhou, Fujian Province where the piece is currently on display to declare it the longest continuous wooden sculpture in the world. You can see many more photos over on China News. It seems like nothing is safe from yarn bombing these days from airplanes to bridges to trains. Not to be outdone, Jill Watt and her sister Lorna Watt recently wrapped this magnolia tree in downtown San Mateo with more than four miles of yarn to create this awesome squid. It’s one thing to completely cover an object in textiles, but to transform a tree into an organism like this seems that much more special. Read more about how they did it on their respective blogs Knits for Life and Dapper Toad. (via Neatorama, Laughing Squid) 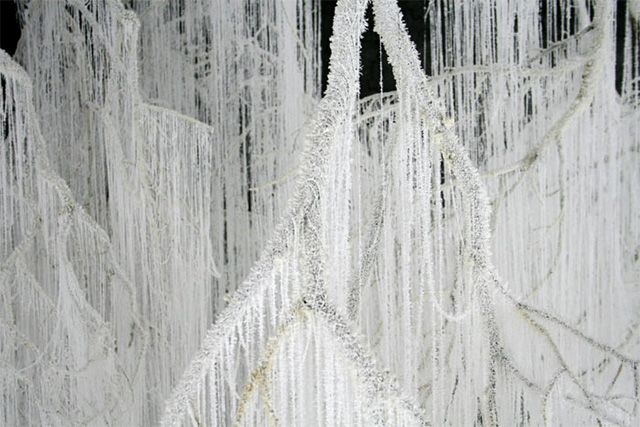 Known for his ethereal and seemingly weightless installations of plastic membranes suspended in midair by black hot glue, Japanese artist Yasuaki Onishi embarked on a slightly different approach with his latest work, Vertical Emptiness. Currently on view at the Kyoto Art Center, the piece is made from upside down tree branches from which is draped a delicate framework of hot glue and crystallized urea compounds. The result is a sort of frozen snowfall that connects the gallery floor and ceiling. You can see the piece in much more detail in the video above by Kuroyanagi Takashi. (via Spoon and Tamago) 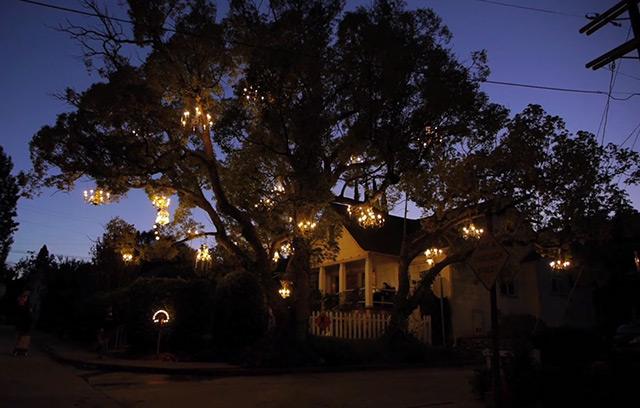