One of the first assignments in a beginning typography course is the creation of visual metaphors, where letterforms are somehow modified or manipulated to represent a word. In this ingenious short film by Greg Condon titled “Disillusionment of 10 Point Font” the metaphor exercise is brought to life with the help of a Smith Corona Galaxie Deluxe typewriter that he used to animate each word. Sound by One Thousand Birds. (via Vimeo Staff Picks) Ceramic artist Laura C. Hewitt creates a wide range of cups, plates, and other ceramic objects imprinted with letters and numbers from old typewriter keys. The Alaska-based artist utilizes fragments from mathematical formulas, programming languages, and other science-influenced designs, all carefully applied with a variety of typewriter letters in black ink to create one-of-a-kind pieces. Hewitt shares about her craft:

Most of my work has been influenced by the dichotomies and juxtapositions of rural Alaskan living. I’m particularly interested in exploring the intersections between technology and nature, art and craft, destruction and creation. As inspiration, I look for the magical within the mundane, provoke thoughtfulness with the practical and animate the pragmatic with mischievousness.

The typographical pieces are really just the tip of the iceberg, you can see many more of her wilderness and tech-inspired ceramics in her Etsy shop. (via Culture N Lifestyle) An Octopus Typewriter by Courtney Brown As part of the San Luis Obispo Museum of Art’s annual California Sculpture SLAM, Oakland artist Courtney Brown unveiled this unweildly typing device titled “Self Organization,” that went on to win first place. Brown used a 1938 Underwood typewriter affixed with sculpted bronze tentacles. We can’t wait to read its first book. All of the sculptures from the event are still on view through November 15, 2015. 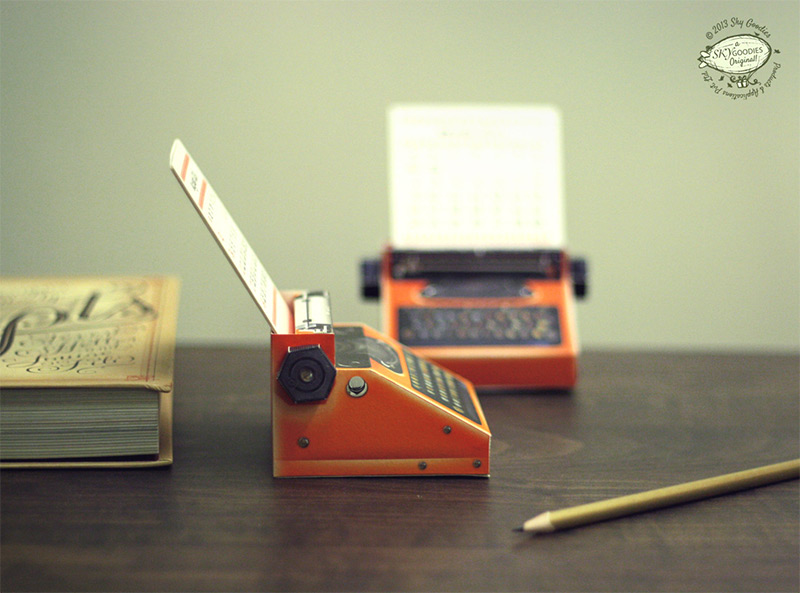 Back in the day I used to do a nice roundup of cool calendars, but didn’t have time this year. Luckily Design Milk, Cool Hunting, and Freshome have you covered if you’re still looking for a way to track 2014 on paper. Etsy also has a solid list of calendars that includes this awesome DIY Printable Paper Typewriter Calendar (alternate design) in the form of a miniature typewriter from the folks at Mumbai-based SkyGoodies. It’s a downloadable PDF that you print, cut and fold for just $5. Fun! (via Green Chair Press) Artist Jeremy Mayer (previously) just completed this beautiful set of swallows using assembled typewriter parts. The pieces required Mayer to find multiple sets of identical parts adding a significant amount of time to sourcing materials, but as a happy accident the artist also discovered his design allowed for the wings to partially retract. If you’re unfamiliar with Mayer’s work it might surprise you to know that he doesn’t use solder or glue (or even objects that haven’t originated from a typewriter), but instead assembles everything using only native parts. You can follow his progress for this and other projects over on Tumblr.

Skull Made of Typewriter Parts by Jeremy Mayer Artist Jeremy Mayer (previously) recently completed a new sculpture titled Skull I made from vintage typewriter parts. As with all of his assemblages the skull was created without use of welding or adhesives, instead the parts are bent, screwed, and bolted into place using only components extracted from typewriters.