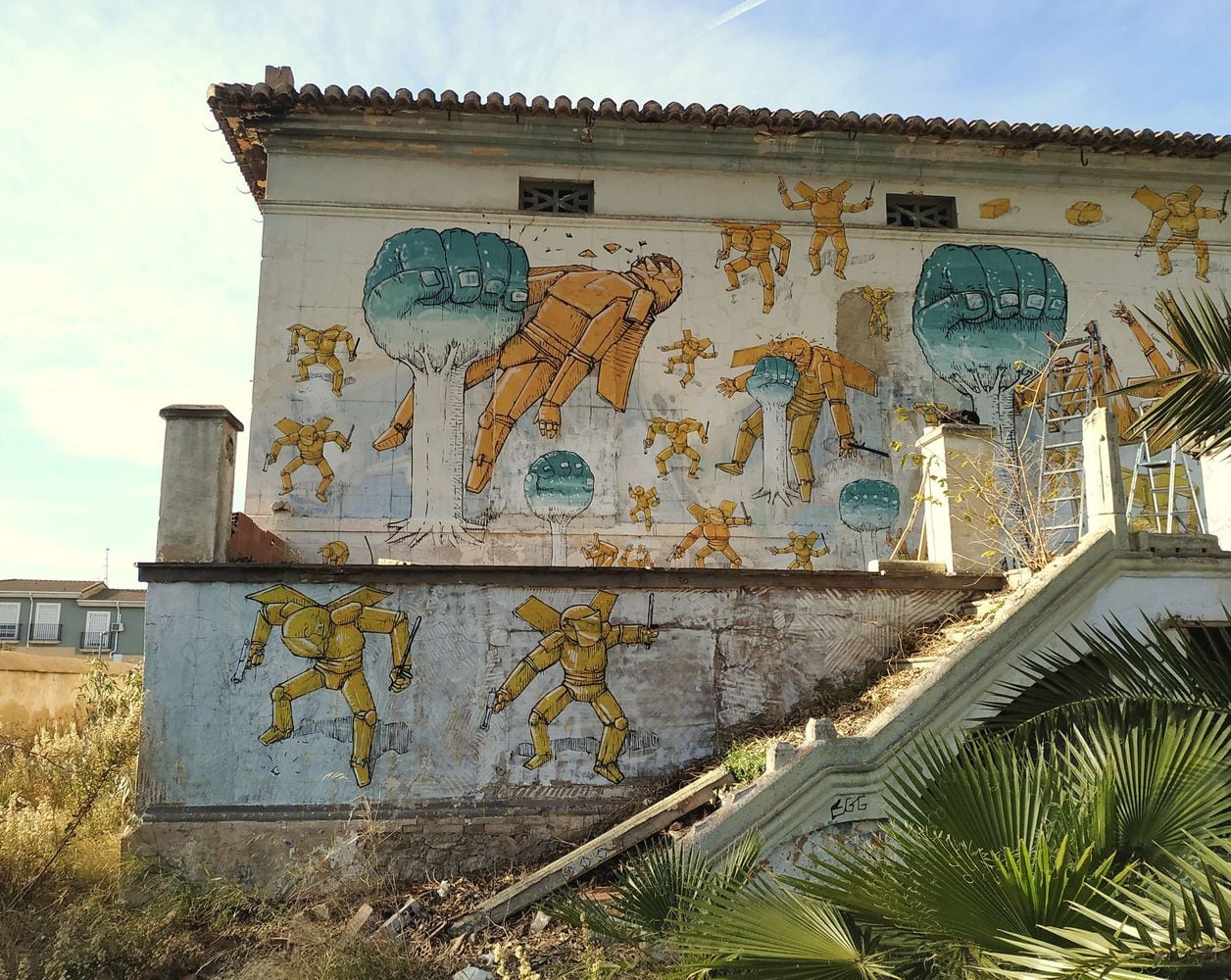 After a COVID-related hiatus, the annual Falles festival in Valencia, Spain, returned this year with an extravagant celebration full of flames and sparks. The five-day pyrotechnic event draws thousands of people into the streets each March to witness fireworks, explosions, and a variety of sculptures burn to the ground, and at the heart of this year’s production was a 23-foot polar bear by artist Antonio Segura, aka Dulk (previously).

Following works by PichiAvo, Okuda San Miguel, and Escif in previous iterations, Dulk’s fantastical and surreal “Protect What You Love” featured wildlife and plants balanced on top of the cold-weather creature. Two years in the making, the monumental piece was constructed with cardboard and wood, and a team assembled the approximately 30 individual vignettes around the central figure once on site. Each of the works speaks to the urgent need to address the climate crisis, which Dulk explains:

We have the mother polar bear in the main square for falles, her fur melting like a candle as other animals take refuge on and around her. They are lost and they are all in search of a new habitat… The koala represents the wildfires of Australia in 2019/2020 where over 60,000 of the creatures lost their lives. The orangutan represents Borneo where their rapid decline as a species is a direct result from hunting, logging Palm oil, and developments in agroforestry. The fish turns to a can, to reflect the loss of marine life from overfishing.

“Protect What You Love,” which burned this last weekend, is a poetic reminder of how quickly loss can occur. “While this is just a metaphor it could become our reality unless we begin to change our behaviour,” Dulk tells Charlotte Pyatt in an interview with Juxtapoz. “I hope the event more than anything else, encourages awareness and action for these urgent concerns.”

The Spanish artist also has smaller works on view at Valencia’s Tuesday to Friday through April 21 and Centre del Carme through May 8 to coincide with the event. See more of his pieces and behind-the-scenes look at the spectacular festival on Instagram. This Too Shall Pass: How Spanish Artist Escif’s Meditating Woman Lit Up Valencia All images © Escif, shared with permission

The beginning of Escif’s Instagram post reads, “Yesterday the meditator’s body was burned. With it many things were burned. 4 tons of wood were burned. A year of intense and wonderful work was burned.” Attached to a darkened image of glowing flames, his words are simultaneously reflective, accepting, and hopeful.

The Spanish artist is referring to his large-scale project “This Too Shall Pass,” which was scheduled to be part of Valencia’s Las Fallas Festival. Each year, the outdoor celebration sees massive projects created by artists—like Okuda San Miguel in 2018 and PichiAvo in 2019—that are set on fire and eventually consumed by flames. Because of the coronavirus outbreak, the 2020 event that would have featured Escif’s work was postponed. Despite its lack of spectators, though, the Spanish city decided to proceed with part of the traditional ceremony, lighting just the bottom half of Escif’s wooden sculpture on fire.

This is a familiar story. Creatives, businesses, and institutions around the world are struggling with the loss of revenue as exhibitions and shows have been pushed to a later date or canceled altogether. They’re also dealing with the more emotional impact of projects unrealized, something Escif has been sharing candidly.

This is not the end we expected. Neither are the circumstances. The magnitude of this figure can never be. Perhaps another woman, perhaps a part of it, perhaps only the memory, perhaps only her absence… The meditating woman tells us that everything is impermanent. Nothing is forever. We will overcome the emptiness of these failures.

Topping 20 meters tall, the artist’s wooden figure is dressed in a white button-up with dark pants. She sits in the lotus position with closed eyes and a straight back and represents quiet, thoughtfulness, and moments of peace. “From this woman’s ashes, live flowers will be born. And little insects will scatter its seeds. Seeds of conscience, of peace, of humanity. Seeds of light that help us face the new world that is being born these days,” Escif writes.

Although her bottom half has been burned, the figure’s head and shoulders will remain in Valencia Public Square until the crisis ends. To fit the current moment, the artist outfitted her with a surgical mask that covers her nose and mouth. “Meditating is the exercise of training our consciousness in the acceptance of impermanence,” the artist said. “Reality is changing and ephemeral. We are living in an uncertain moment that we do not know where it will take us. Let’s listen to what this meditating woman tells us. This too shall pass.”