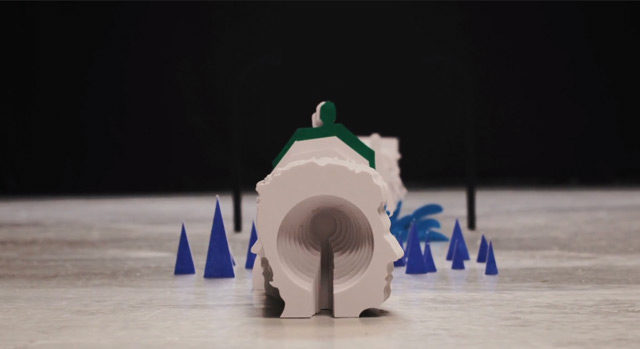 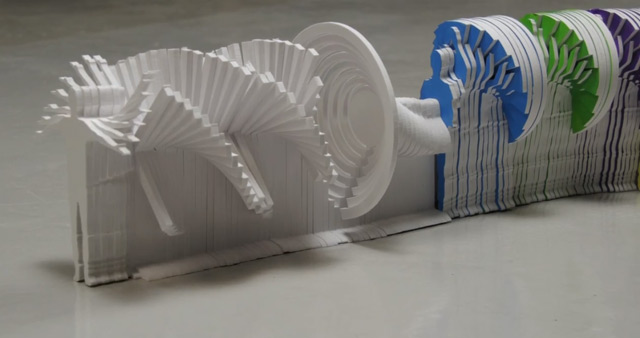 The Event of a Thread: Anne Hamilton’s Groundbreaking Installation Filmed and Photographed by Paul Octavious It’s a deep regret that I didn’t head up to New York over the last few weeks to catch Ann Hamilton’s groundbreaking installation, The Event of a Thread, at the Park Avenue Armory. Perhaps the only saving grace of not seeing it in person is this gorgeous new video by my friend Paul Octavious who managed to catch a final glimpse of the installation before it closed last weekend. As visually stunning as it appears, I’m certainly left asking… “So what does it all mean!?” A field of swings suspended 70 feet in the air, a gargantuan white curtain attached to a network of ropes and pulleys, readers sitting at giant wooden tables reading to nearby pigeons. Via the Armory:

Visual artist Ann Hamilton combines the ephemeral presence of time with the material tactility for which she is best known to create a new large-scale installation for the Wade Thompson Drill Hall. Commissioned by the Armory, the event of a thread references the building’s architecture, as well as the individual encounters and congregational gatherings that have animated its rich social history. A multisensory affair, the work draws together readings, sound, and live events within a field of swings that together invite visitors to connect to the action of each other and the work itself, illuminating the experience of the singular and collective body, the relationship between the animal and the human. The address of the readers to the pigeons shifts at the end of each day, when a vocalist on the drill hall’s balcony serenades their release to flight. Each day’s song is cut with a record lathe, and the resulting recording is played back the next day.

To read more about the artists intent and purpose you can read her artist statement (PDF). Thanks to Paul for letting me use his imagery here, you can see more photos he shot by following him on Instagram. The Profilograph: A Rotating Device that Creates Continuously Morphing Profiles

The Profilograph is a bizarre device created by Chicago artist Pablo Garcia based on a series of four books written in 1528 by German artist Albrecht Dürer that examine the geometry of the male profile through carefully documented illustrations. The device transforms a series of Dürer’s drawings into a contiguous 3D extrusion that rotates on a circular spindle causing a shadow that morphs between each profile. The machine was designed in 2008 for an exhibition at the University of Michigan. You can learn more about the Profilograph here, and if you liked this also check out Kumi Yamashita’s origami profiles. (via vimeo)