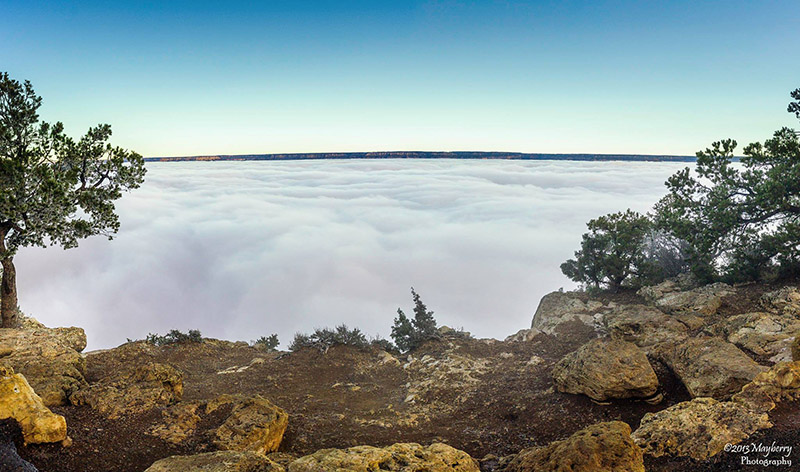 Last week on November 29th the Grand Canyon experienced a rare temperature inversion where cool air began to rise from the bottom of the canyon and met warm air above creating low level clouds. Apparently this type of thing happens once or twice a year, but almost never with clear skies which provided an unprecedented once-in-a-decade view of the canyon filled to the rim with fog. Several photographers were on hand including Ben Mayberry who captured some amazing panoramic shots, and Paul Lettieri managed to shoot a timelapse of the event. (via My Modern Met)

A Tornado of Repurposed Wood Sweeps through Art Bogotá Created by Colombian artist Otoniel Borda Garzón, this towering 40 foot (12 meter) torando of scrap wood was installed last year as a centerpiece at the Bogota International Art Fair. Garzón is known for his twisting organic vortices constructed primarily from old pieces of lumber that seem to dominate gallery spaces, an ongoing series of work he refers to simply as Reserva. You can see more of this twisting sculpture over on Behance. You can see much more of the photographer’s work over on 500px. Adrift is set to music by The Album Leaf and you can download it for free here. (via vimeo)

On June 3rd of this year after four years of trying, Arizona photographer and storm chaser Mike Olbinski finally got the shot he’d been searching for: the formation of a gigantic rotating supercell. After four trips to the central plains since 2010, Oblinski and friend Andy Hoeland were tracking storms in northern Texas last week when they spotted this unbelievable cloud formation. The duo were actually forced to drive right through the storm system (which didn’t spawn a tornado) to obtain this unworldly footage that might as well have been shot on Jupiter, but in the end it was all worth it. Make sure to view it in HD, full-screen, and you can read more about the once-in-a-lifetime encounter over on his blog. (via vimeo)

I’ve been traveling a bit so I’m a bit late to this as I know it’s been on a lot of news outlets lately. Regardless, filmmaker Chris Tangey shot this incredible footage of a ‘fire devil’ near Alice Springs, Australia on September 11th. In the unedited, raw footage recently provided by Tangey you can watch as the tornado—which is technically more of a dust devil—towers over 100 feet (30 meters) high. The Huffington Post explains that while footage like this is rare, these vortices of fire are actually pretty common.