Founded by photographer Levi Bettwieser, the Rescued Film Project obtains unclaimed film rolls from the 1930s to the 1990s and develops them for the first time, salvaging hidden memories than might have otherwise been completely lost to time. In late 2014 at an auction in Ohio, Bettwieser discovered a lot of 31 undeveloped film rolls dating back to WWII with labels including Boston Harbor, La Havre Harbor, and Lucky Strike Camp. After acquiring the rolls of film, he set to work and developed dozens of usable negatives that somehow survived the last 70 years. The process was captured in this 10-minute film by Tucker Debevec.

Bettwieser says that although many of the rolls were too damaged to develop, the majority of them resulted in usable prints, and he still has one larger format roll to develop that requires special supplies. Staring carefully at so many photos may have also resulted in an additional discovery. Bettwieser noticed a single unidentified soldier seems to appear in several different shots, and he suspects this may be the photographer who lent the camera to others in order to get shots of himself. You can scroll through dozens more photos over on the project’s website.

Part of the Rescued Film Project’s mission is to connect photos with relevant places and people, so if you recognize anything, or if you have rolls of old undeveloped film, be sure to get in touch. (via PetaPixel) Although WWII ended almost 70 years ago, its legacy lives on: in photographs, memories and on our landscape. Walk through the forests of Germany and you’ll see craters or, scars, as German photographer Henning Rogge calls them, that are the aftermath of bombs being dropped from planes. Rogge has been tracking down these craters and photographing them, capturing moments, after decades have elapsed, of earth slowly healing her wounds. An unknowing hiker might easily mistake them for small ponds and nothing more, which is perhaps why these masked scars are so haunting. Rogge’s photographs are part of a group show titled The Beautiful Changes, which is on display at RH Contemporary Art in New York City through September 13, 2014. (via Hyperallergic) 9,000 Fallen Soldiers Etched into the Sand on Normandy Beach to Commemorate Peace Day 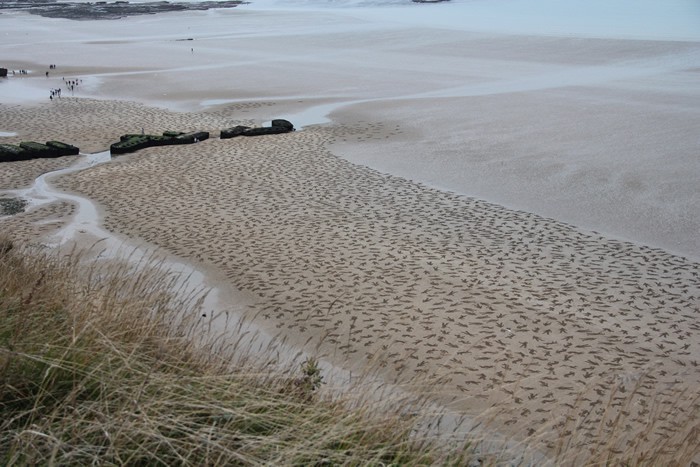 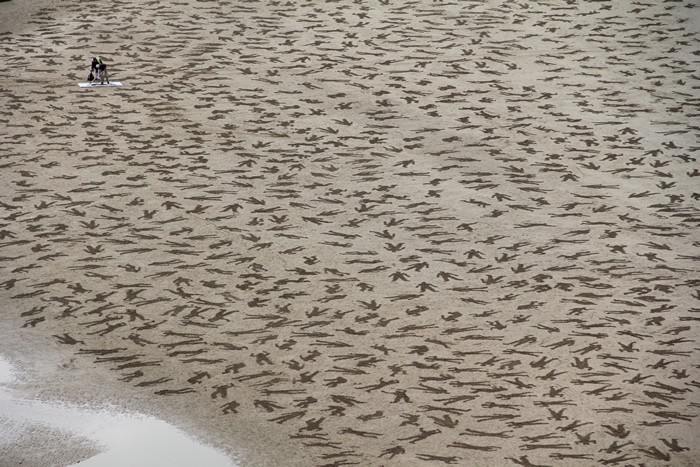 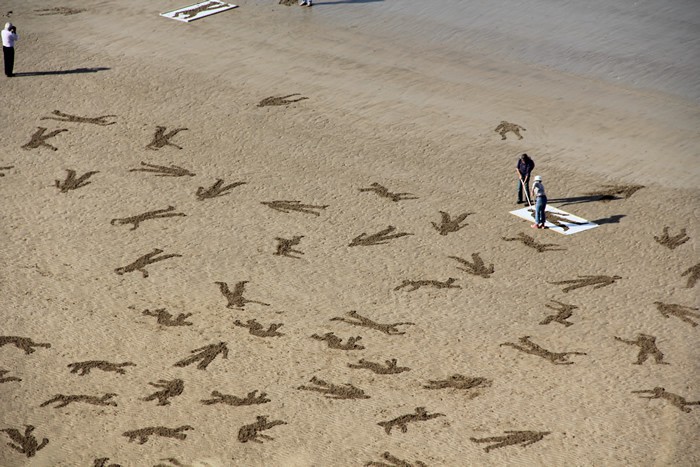 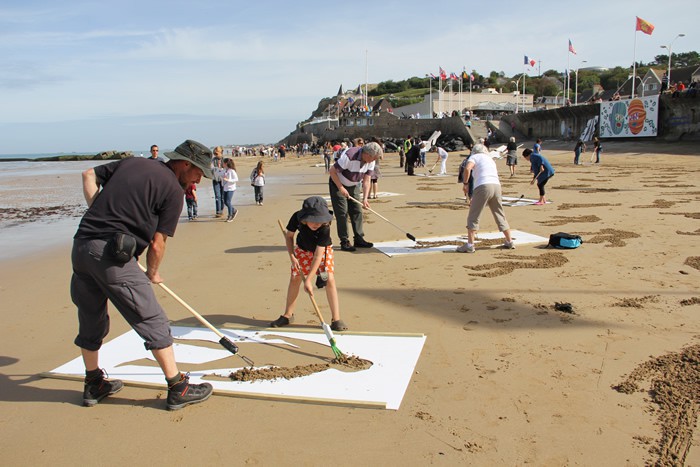 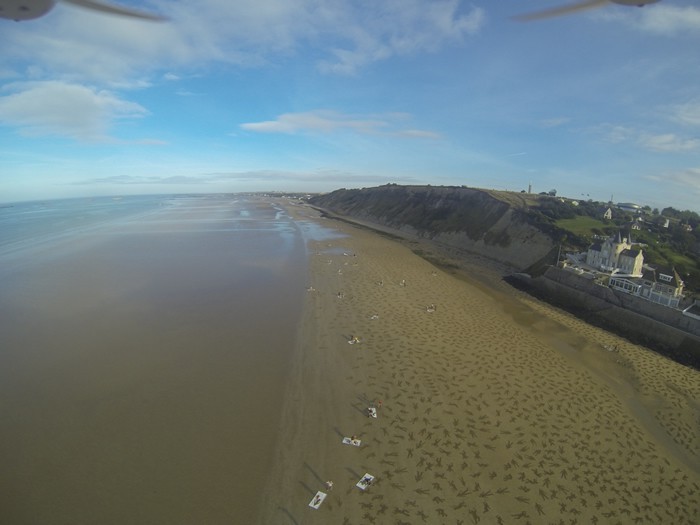 This past weekend British artists Jamie Wardley and Andy Moss accompanied by numerous volunteers, took to the beaches of Normandy with rakes and stencils in hand to etch 9,000 silhouettes representing fallen people into the sand. Titled The Fallen 9000, the piece is meant as a stark visual reminder of the civilians, Germans and allied forces who died during the D-Day beach landings at Arromanches on June 6th, 1944 during WWII. The original team consisted of 60 volunteers, but as word spread nearly 500 additional local residents arrived to help with the temporary installation that lasted only a few hours before being washed away by the tide. (via Lustik)

An exceptional and chilling collection of abandoned World War II bunkers by Amsterdam-based photographer Jonathan Andrew. While some photos clearly show the decrepit nature of these 70-year-old structures, it’s bizarre how futuristic some of them appear.

Iconic historical war photos with the subjects removed by Slovakian artist Pavel Maria Smejkal. (via i like this art)

Russian photographer Sergey Larenkov melds photos taken during World War II with photos he shoots himself from the same vantage point in locations around Berlin, Prague, Moscow and Vienna. The results are an extremely haunting juxtaposition of time and place. See full-size images via his blog. (via theo)

I’ve been meaning to post this for a while ever since seeing it on Graphic Hug a while back but it kinda fell off the radar. Dazzle camouflage was a technique used during both WWI and WWII to obscure aspects war ships.

At first glance Dazzle seems unlikely camouflage, drawing attention to the ship rather than hiding it, but this technique was developed after the Allied Navies were unable to develop effective means to disguise ships in all weather.

Dazzle did not conceal the ship but made it difficult for the enemy to estimate its type, size, speed and heading. The idea was to disrupt the visual rangefinders used for naval artillery. Its purpose was confusion rather than concealment. An observer would find it difficult to know exactly whether the stern or the bow is in view; and it would be equally difficult to estimate whether the observed vessel is moving towards or away from the observer’s position.

RISD also has a super cool online gallery on the topic. Great stuff. On a related note, and from a different war, see also Quaker Guns. (via graphic hug)