Who’s Watching Whom? The Moon Forms A Massive Eye Peering Out Over Utah Utah is full of strange occurrences these days: first, the mysterious monolith popped up in a remote region of the Southwestern state, and now, the moon was caught peering over its landscape in an act of supernal surveillance.

During Halloween weekend, Phoenix-based photographer Zach Cooley traveled to Arches National Park in Moab, Utah, and staked a spot near this sandstone arch that dates back millions of years. The location wasn’t just a good guess—Cooley relied on three smartphone apps to position himself in the right place at the right time. When the moon passed by the opening, he snapped the incredible juxtaposition, revealing a massive eye embedded in the rocky landscape. The fortuitous photograph subsequently was named NASA’s Photo of the Day, which then mused: “Who’s watching whom?”

For more of Cooley’s moon-chasing escapades, check out his Instagram, and pick up a print on his site. (via This Isn’t Happiness)

Related posts on Colossal about moon 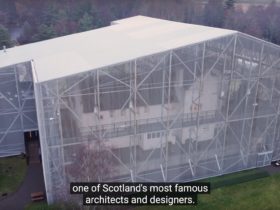