In his mixed-media portraits, Chicago-based artist Chris Pappan draws on the tradition of ledger art, a practice that flourished among Native populations throughout the Great Plains from around 1850 to 1920. Rooted in narratives, the renderings depicted the ways of life of Indigenous people and the nuances otherwise left out of mainstream conversations. “The mid-19th Century was a tumultuous time for the Indigenous peoples of America; the doctrine of Manifest Destiny brought deep pain and suffering but it also introduced new modes of expression,” says Pappan, who is a citizen of the Kaw (Kanza) Nation and of Osage, Lakota and mixed European heritage.

Using graphite, colored pencils, ink, and water-based media, the artist illustrates black-and-white portraits on a variety of intentionally sourced materials, like municipal ledgers and mining certificates. One artwork (shown below) features five mirrored figures imprinted on Boy Scouts of America neckerchiefs that offer commentary on the destructive practices of the youth organization by recreating appropriated imagery. A similar piece, “Of White Bread and Miracles,” evokes the illustrations in the manual Here Is Your Hobby: Indian Dancing and Costumes, which the group often used to teach its members. “The book is an example of cognitive dissonance as it erases any vestiges of contemporary Native people and homogenizes all Native American cultures while making casual remarks such as ‘…get a local Indian to teach you singing and dancing if you can…,'” Pappan writes. Despite invoking historical references, the artist imbues his figurative renderings with visions for the future. The lowbrow movement—particularly the melding of technical ability with taboo subject matter—influenced much of his earlier work. More recent projects have honed in on issues of systemic racism and appropriation of sacred objects, which Pappan hopes inspires viewers to question their own complicity. “I’ve always felt it important to understand boundaries (or rules) so that one can break them and then be able to redefine culture in our own terms. (Native American) Culture is living, and we have the responsibility of its continuity,” the artist says. He expands on the idea:

Through the medium of indelible ink, I am asserting our identity and our continued existence in the face of attempted erasure and negating the centuries of racist misrepresentations… In the re-appropriation of an object that may have been considered sacred to some, I hope to impose a sense of what Native people feel when we’re confronted with sacred objects or the bones of our ancestors displayed as macabre entertainment for capitalism.

Pappan is represented by Blue Rain Gallery in Santa Fe. If you’re in the Chicago area, his ledger art is on display in the windows of 1100 Florence in Evanston through December 4, and “Scout’s Honor” is part of the group show, The Long Dream, which is on view at MCA Chicago through January 17, 2021. Otherwise, stay up to date with his subversive projects on Instagram and his site. During recent years, Chicago-based photographer Reuben Wu has visited quiet regions in Bolivia, Nevada’s SolarReserve, and the rivers of molten sulfur flowing in Indonesian volcanoes to capture the natural grandeur of the earth’s outmost layer. In each location, Wu highlights the land’s beauty by juxtaposing the organic features with artificial light cast by drones flying overhead. The resulting images, of which Wu boasts a rich and diverse collection, employ illuminated geometric shapes to spotlight individual features.

Wu’s most recent series, titled Light Storm, brought him to the rocky landscapes of Utah and New Mexico—the photographer doesn’t disclose specifics due to the fragility of the environment. Here, the hovering instruments brighten the stripes and crevices embedded within the stone formations. Like his 2018 series that detailed the melting Pastoruri Glacier in Peru, Light Storm plays a similar role. “I felt like it was an attempt to document and preserve the memory of a landscape in peril,” he shares with Colossal.

Adamant about leaving no trace on the locales he visits, Wu’s process allows him to maintain a distance from his rugged subject matter while creating the conditions necessary for such precise shots. He explains:

Instead of the old photographers’ adage of waiting for the right moment, I’m literally creating it from my position behind the camera. It also allows me to have more creative ownership over a photograph of a landscape. Something I’ve been struggling with as a photographer/artist is the idea that a beautiful landscape is doing all the work for me, so this was an opportunity to finally have more artistic control.

Overall, Wu writes, “the project is about presenting familiar sights in a new and unfamiliar light, renewing your sense of seeing and the experience of discovery.” Prints of his topographical images are available in his shop, and you can find more of his work on Instagram, Twitter, and Behance. Through thickly layered thread, Cape Town-based artist Danielle Clough (previously) conveys joy, positivity, and moments of pure delight, themes she discusses in a new interview supported by Colossal Members. Clough positions herself in the worlds of both fiber-based craft and art by embroidering intimate portraits of pop culture icons and vivid floral works on found objects. Each piece is stitched in vibrant and bold hues that exaggerate existing tones or provide a playful interpretation of the subject.

I love the space I get to occupy as an embroiderer, which is between a crafter and an artist. Whether I’m seen by somebody else as a crafter or as an artist, it’s really none of my business. I love that space because it gives me room to create without necessarily having to evoke meaning.

In the interview, Clough spoke with managing editor Grace Ebert about her resilient optimism, the creative paths she pursued prior to embroidery, and the incredibly rich history of her chosen medium. 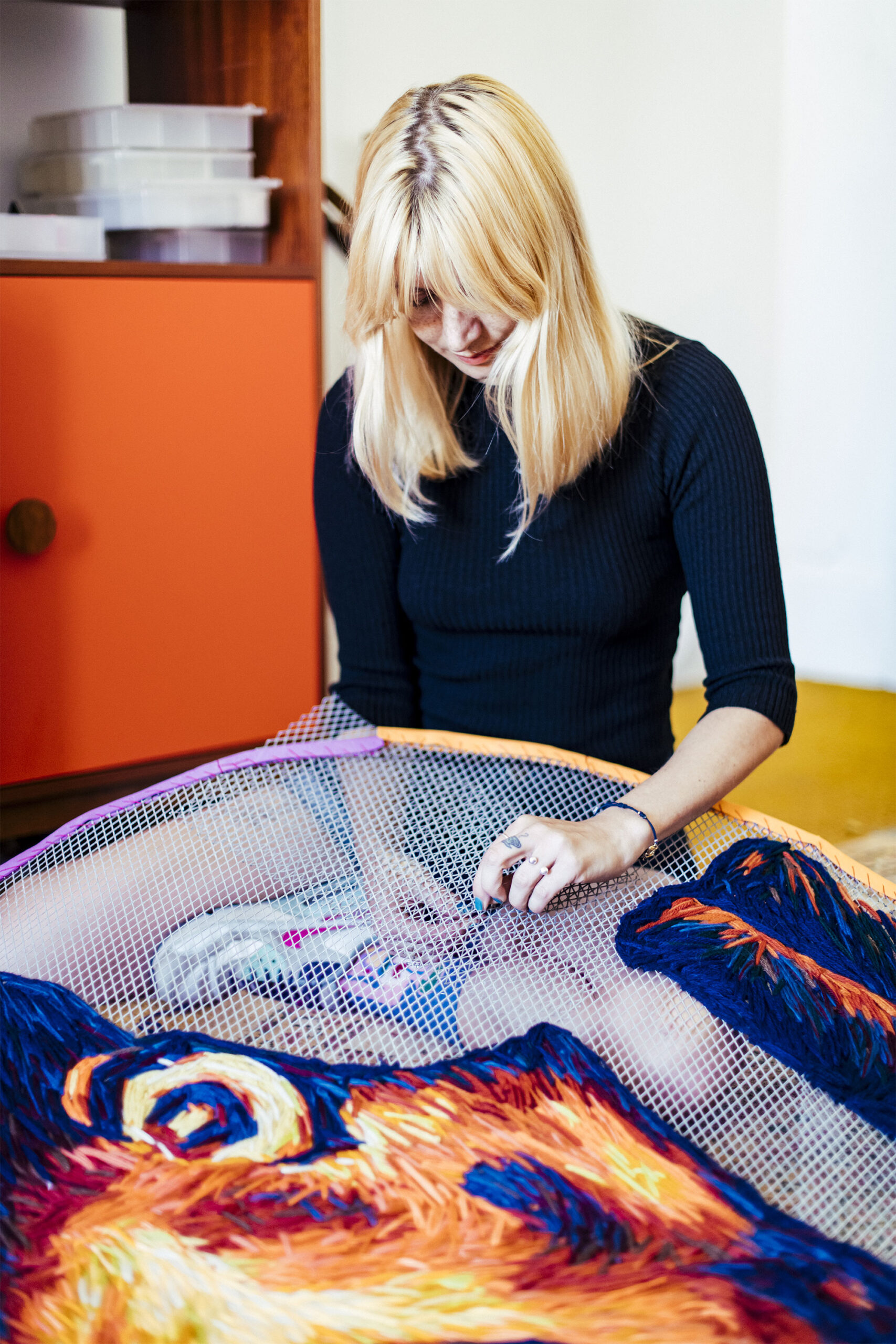 From a dowdy California quail to an incendiary horned lizard, Alessandro Gallo’s peculiar menagerie of animal-human hybrids is teeming with personality. The colorful characters reflect the breadth of interactions occurring every day throughout public spaces as folks encounter others unlike themselves, like a parakeet contorted into a yoga pose or a suit-wearing hooded merganser.

Based in Helena, Montana, the Italian artist likens the animalistic features to a mask or caricature. “I combine it with the silent language of our body and the cultural codes of what we wear in order to portray not only a specific individual, but also the larger groups and subcultures they belong to and, ultimately, the common habitat we all share,” he says.

Generally spanning one to two feet tall, the anthropomorphic sculptures are modeled after a meticulously rendered reference image complete with distinct choices on posture, clothing, and facial expression. Gallo creates an armature from plumber’s piping before hand-building the clay figures. As they dry, he carves in minute details and adds color with acrylic paints.

Gallo’s creatures are included in Intersect Chicago 2020, which runs through December 5. Based in Helena, he’s currently an Archie Bray Foundation resident, and you can find details about his process and works-in-progress on Instagram. “Lost in Thought” (2017) in collaboration with Beth Cavener