Anchorage-based creative Paxson Woelber has captured stunning photographs that illuminate the massive ice formations he recently stumbled upon in an Alaskan cave. Part of Castner Glacier in the Eastern Alaska Range, the expansive chamber is replete with glimmering crystals that jut down from the ceiling in some areas and coat the walls in others.

Woelber shares with Colossal that he visited during a deep freeze that saw temperatures below -30 degrees Fahrenheit, and discovered that the cave was formed by a stream that opened near the back. Geothermal heat warms the interior, causing the higher temperature of the inside to meet the drier, cold air from the outside near the cave’s mouth. This interaction causes moisture in the air to condense, creating the giant formations.

The artist described the experience as feeling as if he were exploring the inner portions of an asteroid. “Near the mouth of the cave, branching tree-like crystals hung down over a foot from the roof of the cave,” he says. “Toward the back, the crystals were smaller and more tightly-packed, like the crystals on the inside of a huge geode.” Head to Woelber’s Instagram to check out footage from his visit. Japanese photographer Ryota Kajita has captured the strange ice patterns of Alaska’s interior swamps and ponds for the last eight years as a part of his Ice Formations series. The ephemeral structures look like fanciful desserts discovered in the wild, with frozen shavings lightly dusting the formations’ edges.

“Photography enables me to pay attention to those moments and subjects, take time to observe them and help me to understand my surroundings more intimately,” Ryota tells Colossal. “Through photographs, nature reveals its subtle beauty to me. In the Ice Formations series, I hope to share these transient and small creations of nature with others.”

Images from the series are included in a group exhibition at the Mt. Rokko Photographeric Garden through July 30, 2018. You can see more of the Alaska-based photographer’s explorations on Facebook and Instagram. As the story goes, the original owner of this unwieldy building located in Willow, Alaska built his house shortly after a forest fire with a clear view of Mount McKinley and Denali National Park. As the surrounding trees recovered, the pristine view was obscured and the owner decided to add few more stories, eventually spending a decade adding floors until it reached the 12-ish story tower you see today. Not surprisingly, locals refer to the building as the “Dr. Seuss House” as the design so closely mimics structures you might see in Theodor Geisel’s illustrated storybooks.

While the tower sat abandoned for a while, the Dr. Seuss house apparently has a new owner who is currently working on renovations. Photographer Jovell Rennie and Alaska Aerial Footage recently stopped by to capture some of the images and video you see here. (via Jeroen Apers, Unusual Places) 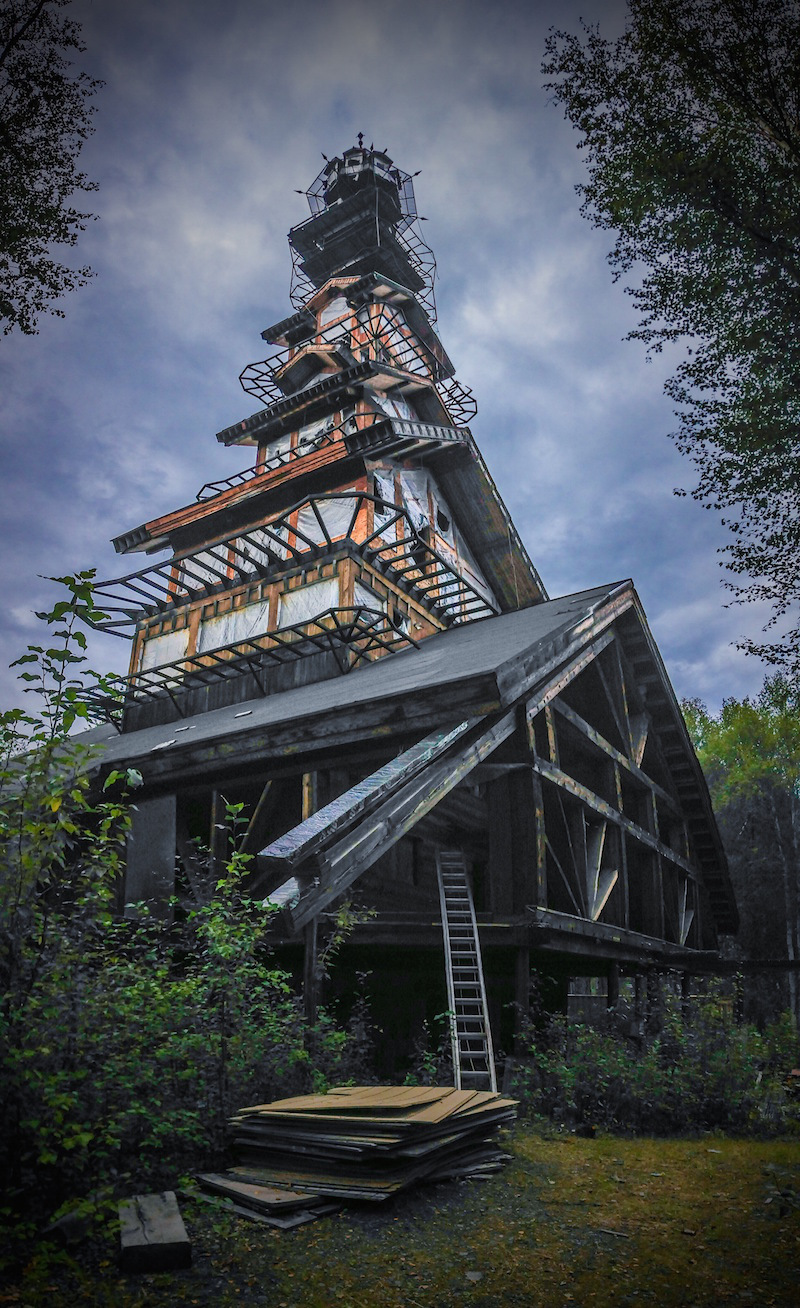