It’s estimated that before 2050, we’ll generate 43 million tons of waste worldwide from one of the most promising clean energy producers alone. Wind turbines, while a cheap and carbon-free alternative to fossil fuels, are only 85 percent recyclable or reusable, and their massive fiberglass blades, which are so large that they span the length of a football field, are notoriously difficult to break down and often end up deteriorating in a landfill for 20 to 25 years. Until a high-volume solution for recycling the structures becomes viable, there’s a growing trend in repurposing the pieces for maze-style playgrounds, construction materials like pellets and panels, or pedestrian bridges as proposed by Re-Wind Network, a group devoted to finding new uses for the unused parts.

A long-time proponent of wind energy, the Danish government is receiving attention for its own initiative that tasked turbine manufacturer Siemens Gamesa with upcycling the blade. The company transformed the long, curved component into an open-air shelter at the Port of Aalborg, where it protects bikes from the elements. Although Siemens Gamesa doesn’t have plans to launch a large-scale initiative for installing similar designs, it recently released new fully recyclable blades that can be turned into boats, recreational vehicle bodies, and other projects in the future. (via designboom) The Most Powerful Tidal Turbine To Date Produces Clean, Reliable Energy Off the Scottish Coast

Earlier this year, the world’s most powerful tidal turbine launched off the Orkney coast, where it will spend the next 15 years generating enough clean energy to power about 2,000 households in the U.K. “O2” is the novel development of the Scottish engineering company Orbital Marine Power, which manufactured the 74-meter-long design during the last decade and a half.

Anchored in the turbulent waters in the Fall of Warness off the northeastern point of Scotland, the 2MW machine is connected to the onshore electricity network of the European Marine Energy Centre. The testing facility uses the powerful currents flowing through the channel from the North Atlantic Ocean to the North Sea—these streams reach 7.8 knots at spring tides—to produce a reliable electricity source for local communities. During its stay, “O2” will also support the center’s hydrogen electrolyzer, which is the first in the world to produce the pure element through tidal velocities, and further aid in broad decarbonization efforts.

Orbital Marine Power has plans to commercialize the innovative technology behind “O2,” which you can explore in detail on the company’s YouTube. (via designboom) 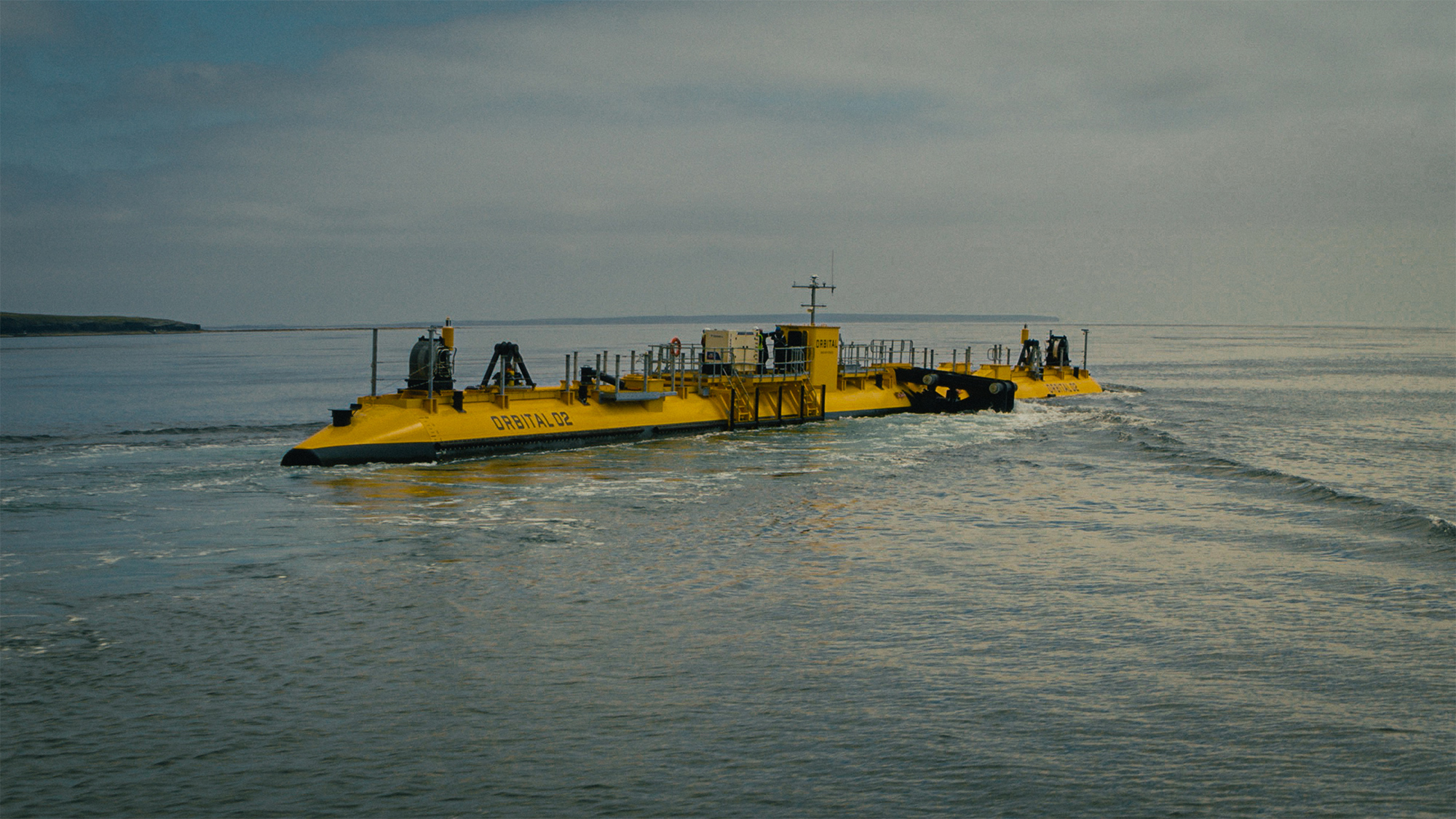