You may have had to cancel your spring vacation, but you still can (virtually) visit the aquatic animals housed at the Monterey Bay Aquarium. Peek at the groups of jellyfish and sharks, do some bird watching in the Aviary, follow the African penguins as they waddle around, and catch a glimpse at the pulsing moon jellies all through the institutions’ free live streams. And for close-ups of the species, head to Instagram. (via Laughing Squid)

French artist Benedetto Bufalino (previously) brings functional fun to existing objects that were built with practicality as a primary objective. Since transforming a cement mixer truck into a disco on wheels back in 2016, Bufalino has continued to create unique urban interventions out of cars, phone booths, and other vehicles and objects from daily life.

While some of his creations are meant to be observed as structures (like his modified aquariums), others are built to be used. Bufalino has transformed a gutted sedan into a working wood-burning pizza oven, outfitted a camper van with a family-sized pool, and modified stretch limousines to serve as outdoor seating or ping pong tables.

Rather than restricting his labor-intensive sculptures to rarefied gallery settings, the artist often installs his work in public spaces to be encountered by the unsuspecting general public. To see more of his projects, including behind-the-scenes looks at the builds, follow Bufalino on Instagram (via designboom).

Since the 1990s, an intrepid group of aquascaping artists have gradually raised the bar of what’s possible with the design of a traditional aquarium. Using only natural elements, the aquariums you see here are years in the making to ensure plants and animals all exist in harmony while trying to achieve merits on an exhaustive list of aesthetic criteria. Over 2,000 participants from 60+ countries submit designs for the annual International Aquatic Plants Layout Contest (IAPLC) and here are some of our favorites from this year.

The 2016 winner was Takayuki Fukada (who also won last year’s grand prize) and you can see more photos on Facebook courtesy André Albuquerque of AquaA3. All images via Haruka Misawa.

Designer and founder of Misawa Design Institute, Haruka Misawa (previously), has designed a series of minimal aquariums titled “Waterscapes” that include 3D printed objects inspired by undersea plant life. These works mimic coral and other aquatic flora that small fish use as hiding places, yet are all manufactured digitally. The objects are ones that would normal topple or crumble because of their own weight, yet because of their underwater location are able to exist as buoyant additions to the aesthetically pleasing fish homes.

Within the series Misawa has also designed bubbles of air within the aquariums that allow plants to thrive at the center of her creations. These meta environments appear like miniature fish bowls within larger aquariums, with plants floating at the top of the inner enclosures. These works were displayed recently in Taiwan in an exhibition titled “Waterscape” and you can see them in action in the video below. (via Design Milk) 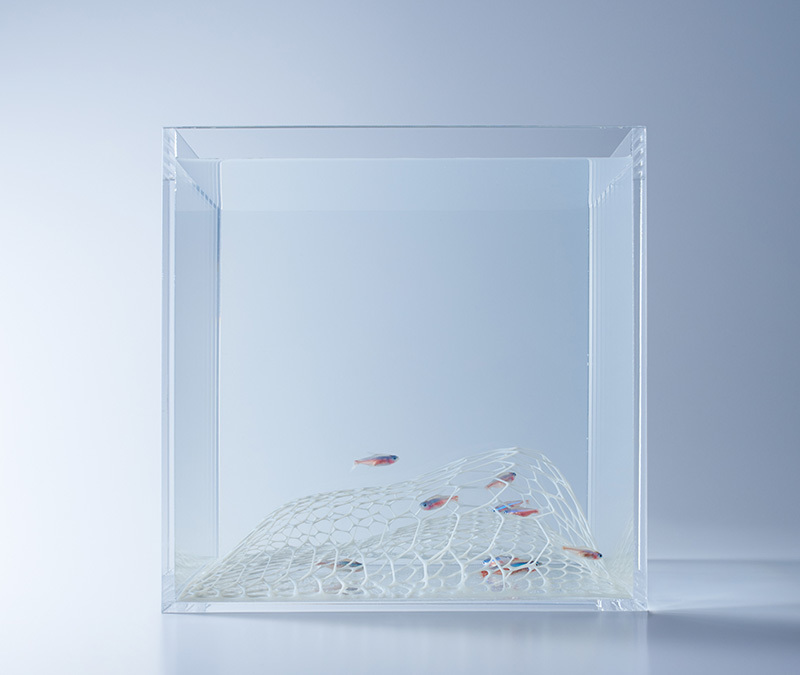