Artist Alexandra Kehayoglou (previously) creates exquisite pieces of flowing textiles that reference the rugged landscapes of her homeland, Argentina. In the creation of each tapestry, Kehayoglou transforms surplus carpet fabric into natural elements that range from a spectrum of Earth-colored mosses to clusters of trees and serpentine rivers that cut through the heart of her weaves. Entwined within each piece are fragments of the artist’s own memories, including witnessing waterways slowly recede and the alterations to Argentina’s grasslands.

Her latest works, a series called Prayer Rugs, depict animal footprints and small vegetative features of the Parana Wetlands located 50 kilometers from Buenos Aires. In recent years, the region’s biodiversity has been decimated by the wood and paper industries, which have facilitated the growth of non-native plant species that have since spread out of control. Additionally, human-made fires wreaked havoc during 2020, while livestock simultaneously trampled the once-luscious grassland.

Kehayoglou’s pieces document the foliage that has survived after years of this widespread exploitation and how, over time, local fauna has started to reappear: thistles grow through cracks in the dry Earth, deer leave mud-splattered tracks, and chirping insects dance upon youthful leaves. The artworks narrate the wetland’s change and growth, reflecting the pain caused by capitalism while turning the need for change into tapestries that reference Argentinians’ hope. Kehayoglou says:

Isolation made me think of my carpets as spaces where new forms of activism could be enacted. A type of activism that instead of focusing on paranoid conflict was silent, absorptive and, as I believe, more effective. My carpets, thus, became instruments for documenting ‘minor’ aspects of the land, which were otherwise overlooked as irrelevant. A focus on its micro-narratives that would open new doors for possible ecological futures. A Beached Whale in the Forests of Argentina 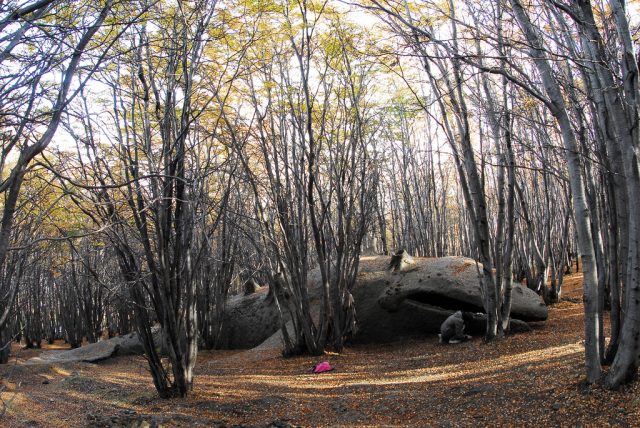 Argentinean sculptor Adrián Villar Rojas creates enormous sculptural works that seem like remnants of a science fiction film set, or bizarre moments from a surreal dream. One of my favorite pieces is My Family Dead (2009), in which he created a life-size blue whale in the woods outside Ushuaia, Argentina. The beached cetacean is pockmarked with tree stumps, making me wonder if it’s being slowly claimed by the forest or perhaps it’s a native resident. Beautiful.