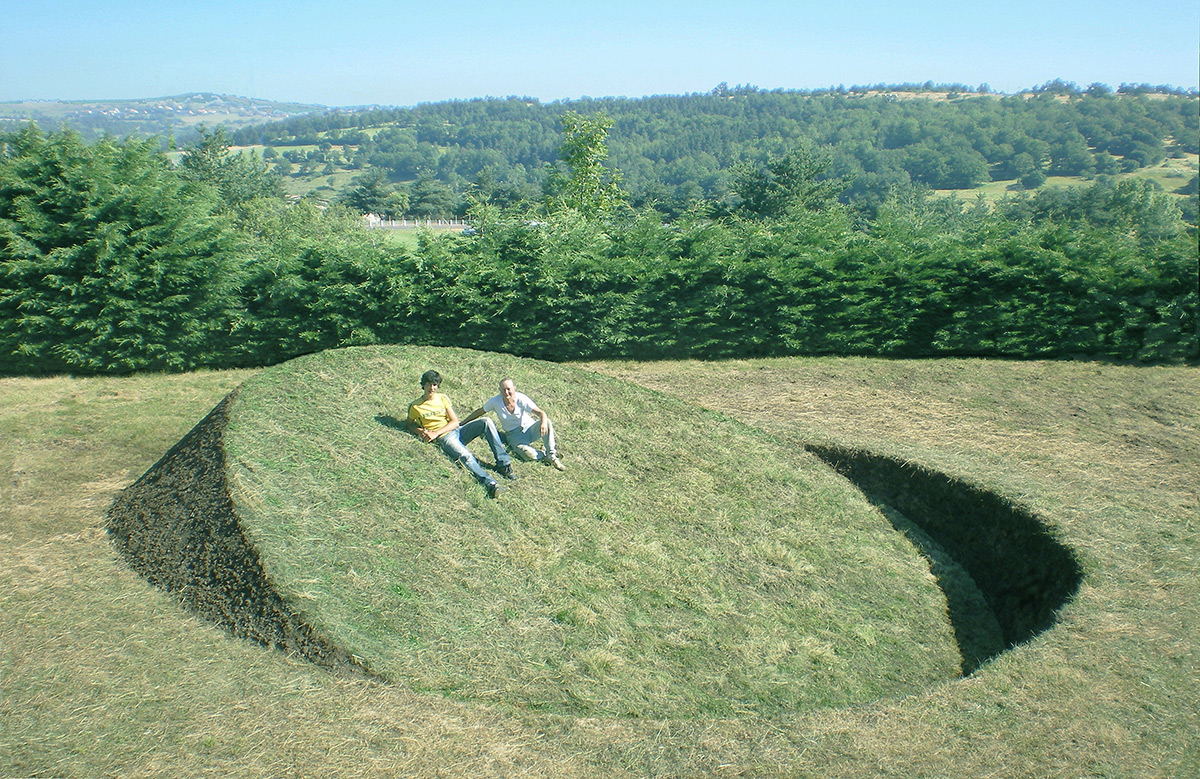 Take a seat on one of Tanya Preminger’s grass-covered artworks, and you won’t be able to right the balance. The Isreal-based artist created immovable slants and indentations embedded in the land that seem like they should tip depending upon the amount of weight settled on either side. For each sloping piece, Preminger employed an excavator to dig a hole and pour the soil into a nearby pile. She then used a shovel, rake, and lengthy ruler to sculpt the slanted earth, covering it with sod at the end.

After seeing a footprint left in a bit of sand, Preminger wanted to express the relationship between give and take that’s inherent in nature. “In physics, an action is equal to its reaction,” she tells Colossal. “The project expresses in material form the philosophical law of balance between opposing sides of one essence.”

The artist produced the first oval impression in 1989 in the fields of the kibbutz Givat Brenner. When organizers of the Chemin d’Art asked her to recreate her original work for their 2008 festival in France, she designed “Round Balance,” altering her oval to a circle “to give a more universal meaning.” (via Design You Trust) ChangKi Chung composes cairn-like portraits of flowers, fruits, and vegetables that balance the unique shapes and vibrant colors of each natural object. In some images the edible elements are shot whole, while in others artistic slices are created to highlight a variety of internal patterns and shapes. For a recent series, Chung was commissioned by the publication Le Monde to create a new still life each week, showcasing stacks of crusty bread, halved hard boiled eggs, and cubes of blood red beets. The Korean photographer has also recently produced two images for the Château du Rivau as a part of a group exhibition celebrating the 500 year anniversary of Leonardo da Vinci’s death. You can see more of Chung’s photographs on his website and Instagram. Working only with rocks, gravity, and patience, artist Michael Grab (previously) builds precarious towers and bridges that seem to defy gravity. Grab first tried stone balancing during the summer of 2008 while exploring Boulder Creek in Boulder, Colorado, and quickly discovered an innate ability to build increasingly complicated, free standing stacks of rocks. While his stone sculptures rely heavily on intuition and experience, there’s actually a method he uses in most of his work involving hidden “tripods” found on the surface of any rock. He shares in detail:

Balance requires a minimum of three contact points. Luckily, every rock is covered in a variety of tiny to large indentations that can act as a natural tripo for the rock to stand upright, or in most orientations you can think of with other rocks. By paying close attention to the vibrations of the rocks, you will start to feel even the smallest “clicks” as the notches of the rocks are moving over one another. In the finest “point-balances,” these clicks can be felt on a scale smaller than millimeters, and in rare cases can even go undetected, in which case intuition and experience become quite useful.

You can watch the video above to see Grab at work over the last year, and also see more photography of his stone balancing in his online portfolio or on Facebook. Grab survives mostly off print sales, so if you’re in need of a fancy new calendar for 2015, he’s got you covered. 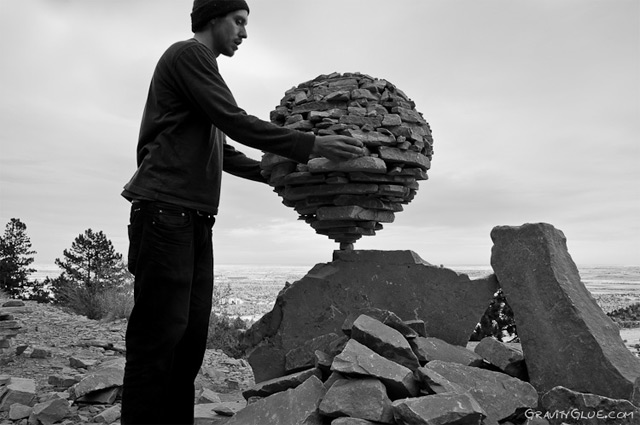 Land artist Michael Grab creates astonishing towers and orbs of balanced rocks using little more than patience and an astonishing sense of balance. Grab says the art of stone balancing has been practiced by various cultures around the world for centuries and that he personally finds the process of balancing to be therapeutic and meditative.

Over the past few years of practicing rock balance, simple curiosity has evolved into therapeutic ritual, ultimately nurturing meditative presence, mental well-being, and artistry of design. Alongside the art, setting rocks into balance has also become a way of showing appreciation, offering thanksgiving, and inducing meditation. Through manipulation of gravitational threads, the ancient stones become a poetic dance of form and energy, birth and death, perfection and imperfection.

Almost all of the works you see here were completed this fall in locations around Boulder, Colorado. You can see much more in his portfolio as well as several videos of him working over on YouTube.