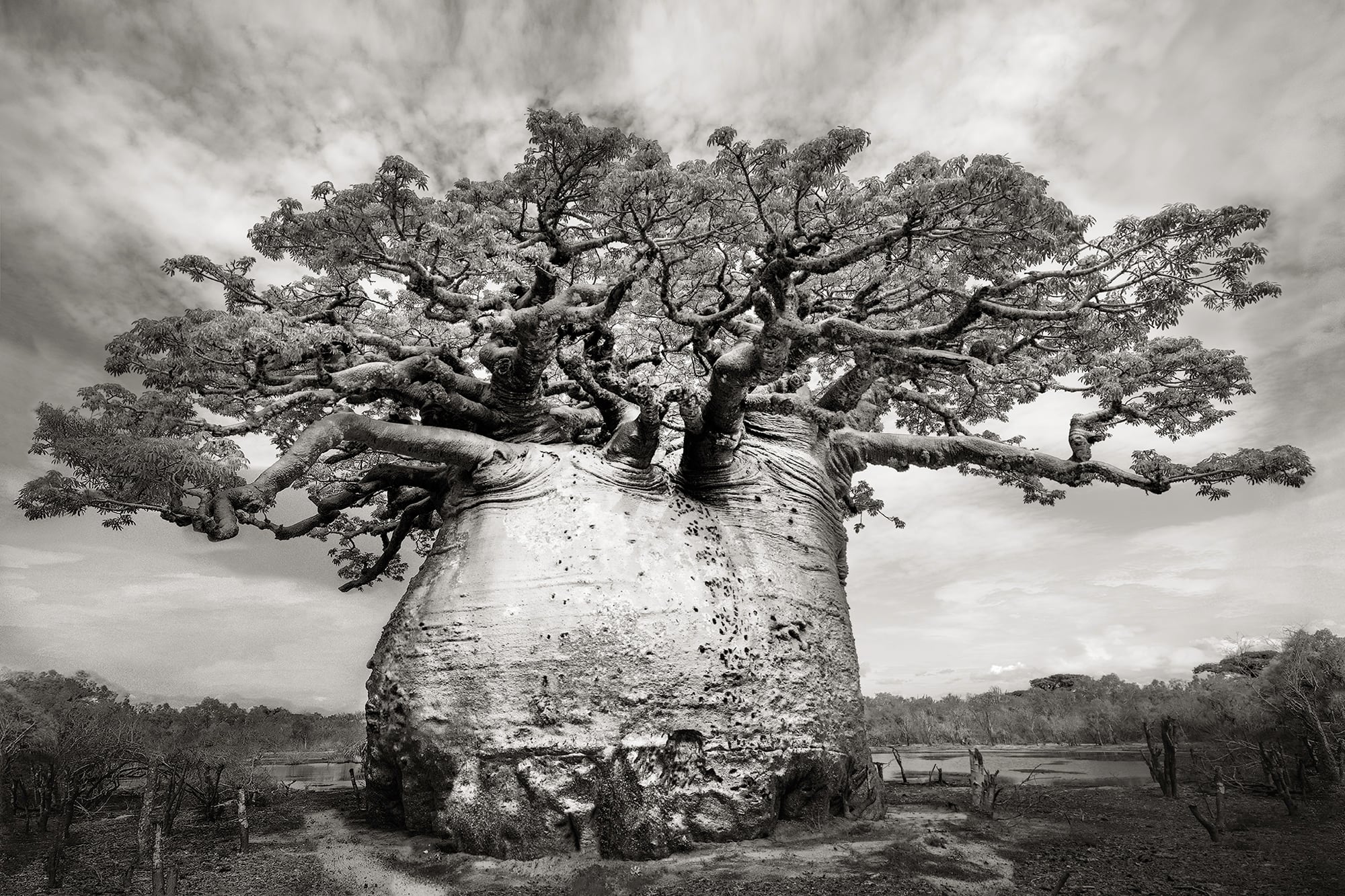 In the fall of 2018, one of Madagascar’s most sacred baobabs cleaved and crumbled. The ancient giant was estimated to be about 1,400 years old and offered food, fuel, and fiber to the region before its trunk, which spanned 90 feet around, collapsed. Known as Tsitakakoike, which means “the tree where one cannot hear the cry from the other side,” the baobab was also entwined with local lore and thought to house the ancestral spirits of nearby Masikoro people. Its loss was devastating to the community and an ominous sign of how the climate crisis is permanently damaging these centuries-old trees.

Bay Area photographer Beth Moon (previously) has been documenting the species since 2006 and traveled to the region when Tsitakakoike fell. There she captured the cracked, deteriorating emblem along with other baobabs in similar states of crisis throughout Madagascar, Senegal, and South Africa. Shot in dramatic black-and-white, the images are rich in texture and frame the baobabs’ wide, crackled trunks and branches that splay outward into massive tufted canopies.

An act of visual preservation, Moon’s photos show how the massive trees’ exposed roots sprawled across the ground, a sure sign of years-long droughts causing many to become so dehydrated they cave under their own weight. These devastating effects are common in the region, which has experienced significant water shortages and rapid reduction of the baobab population in the last few decades. Moon writes about her visit:

Astonishment and horror set in as Tsitakakoike comes into view. Half of the tree has collapsed; a portion of the sides and back of the trunk remain. Gigantic branches, larger than most trees, lay in disarray at the base of the trunk. The entire spectacle is about the size of a football field.

During her visit, Moon captured dozens of photos, which are on view now as part of an online exhibition through photo-eye Gallery and compiled in a recently released book available on Bookshop. You can see more from her travels on Instagram. 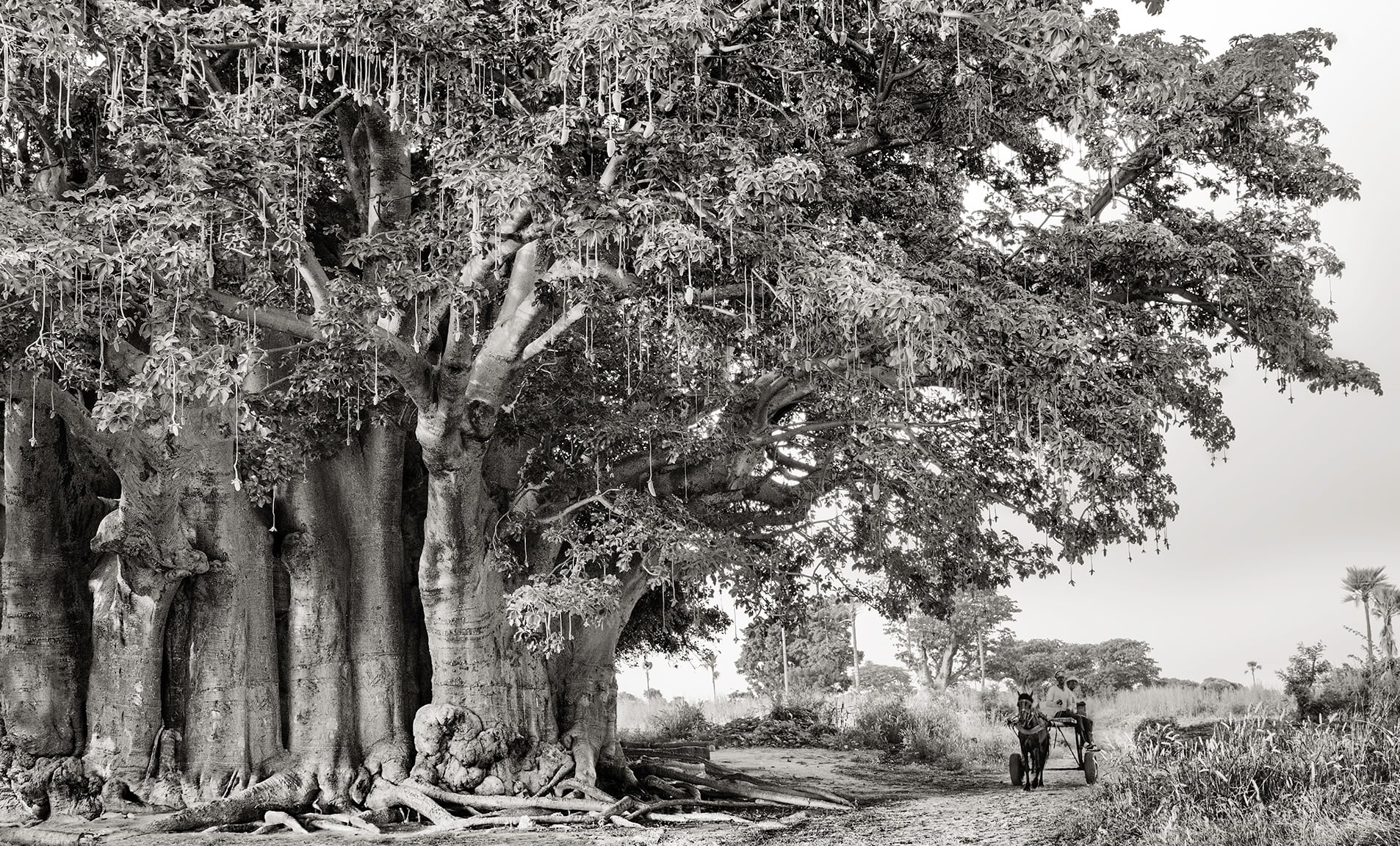 In this new series of striking images, San Francisco-based photographer Beth Moon (previously) captures some of the world’s oldest living trees against shimmering night skies in remote areas of Botswana, Namibia, and South Africa. Titled Diamond Nights, the new photos were inspired in part by Moon’s interest in several new studies suggesting a relationship between starlight and cosmic radiation on tree growth. Diamond Nights is a progression of Moon’s 15-year journey photographing ancient trees around the world. Moon shares about her process: Criss-crossing the world with stops on almost every continent, San Francisco-based photographer Beth Moon spent the last 14 years seeking out some of the largest, rarest, and oldest trees on Earth to capture with her camera. Moon develops her exhibition prints with a platinum/palladium process, an extremely labor-intensive and rare practice resulting in prints with tremendous tonal range that are durable enough to rival the longitivity of her subjects, potentially lasting thousands of years. Moon’s collected work of 60 duotone prints were recently published in a new book titled Ancient Trees: Portraits of Time. From Abbeville Press:

This handsome volume presents sixty of Moon’s finest tree portraits as full-page duotone plates. The pictured trees include the tangled, hollow-trunked yews—some more than a thousand years old—that grow in English churchyards; the baobabs of Madagascar, called “upside-down trees” because of the curious disproportion of their giant trunks and modest branches; and the fantastical dragon’s-blood trees, red-sapped and umbrella-shaped, that grow only on the island of Socotra, off the Horn of Africa.

Moon is currently working on a new series of trees photographed by starlight called Diamond Nights.