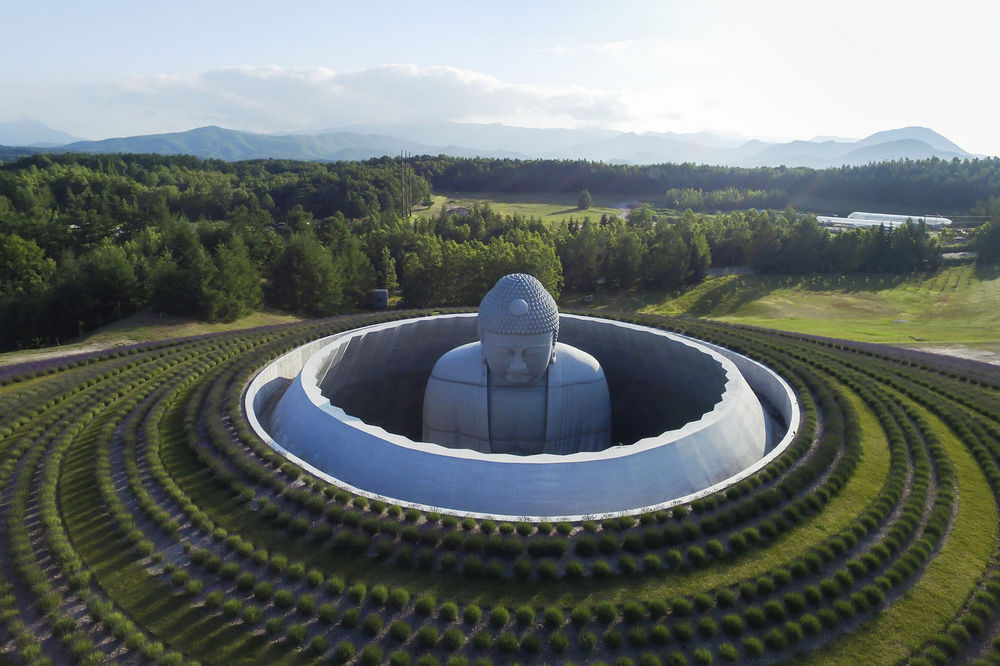 Unless otherwise noted, all photographs by Shigeo Ogawa.

Normally a cemetery wouldn’t be on our list of recommended sites to see, but the Makomanai Cemetery is one of the most awe-inspiring places we’ve ever been. Located in the outskirts of Sapporo, a large stone Buddha occupies the sprawling landscape. All 1,500 tons of it has sat alone there for 15 years. But when the cemetery decided they wanted to do something to increase visitor’s appreciations for the Buddha, they enlisted architect Tadao Ando, who had a grand and bold idea: hide the statue. “Our idea was to cover the Buddha below the head with a hill of lavender plants,” said Ando. Indeed, as you approach “Hill of Buddha” the subject is largely concealed by a hill planted with 150,000 lavenders. Only the top of the statue’s head pokes out from the rotunda, creating a visual connection between the lavender plants and the ringlets of hair on the Buddha statue’s head.

Upon entering, visitors are forced to turn left or right and walk around a rectangular lake of water before entering the 131-ft (40-meter) long approach tunnel. The journey is a constant reminder of the weather, the breeze and the light, and is works in tandem to heighten anticipation of the statue, which is only visible once you reach the end of the tunnel.

Any time of the year, visitors will have a different experience. The 150,000 lavenders “turn fresh green in spring, pale purple in summer and silky white with snow in winter.” It really is a miraculous work of environmental art. (Syndicated from Spoon & Tamago)