Japan-based artist Hiroki Takeda adds a dose of whimsy to his otherwise faithful portrayals of friendly felines. Largely rendered in shades of pink and purple with intermittent splashes of blues and greens, Takeda’s watercolor works blend flora and fauna into affectionate cats and kittens caught lounging around or mid-snooze. Vines and grasses add fur-like texture and outline the creatures’ figures, which the artist then completes with sprawling gardens brimming with leaves, blossoms, and butterflies.

Takeda tells Colossal that his vivid works are derived from a combination of influences, including his mother’s enthusiasm for plants and his background in caricature, and are the result of experimenting with myriad styles throughout his university studies. “One day, I had a moment in my mind when I saw a painting of an animal and its fur looked like a plant,” he says. “The idea of combining watercolor with plants and animals felt very natural to me.”

If you’re in Osaka, stop by Shinsaibashi Gajin Gallery to see the artist’s floral animals between July 24 to August 12. Otherwise, pick up a print, and follow his work on Instagram. (via Design You Trust) 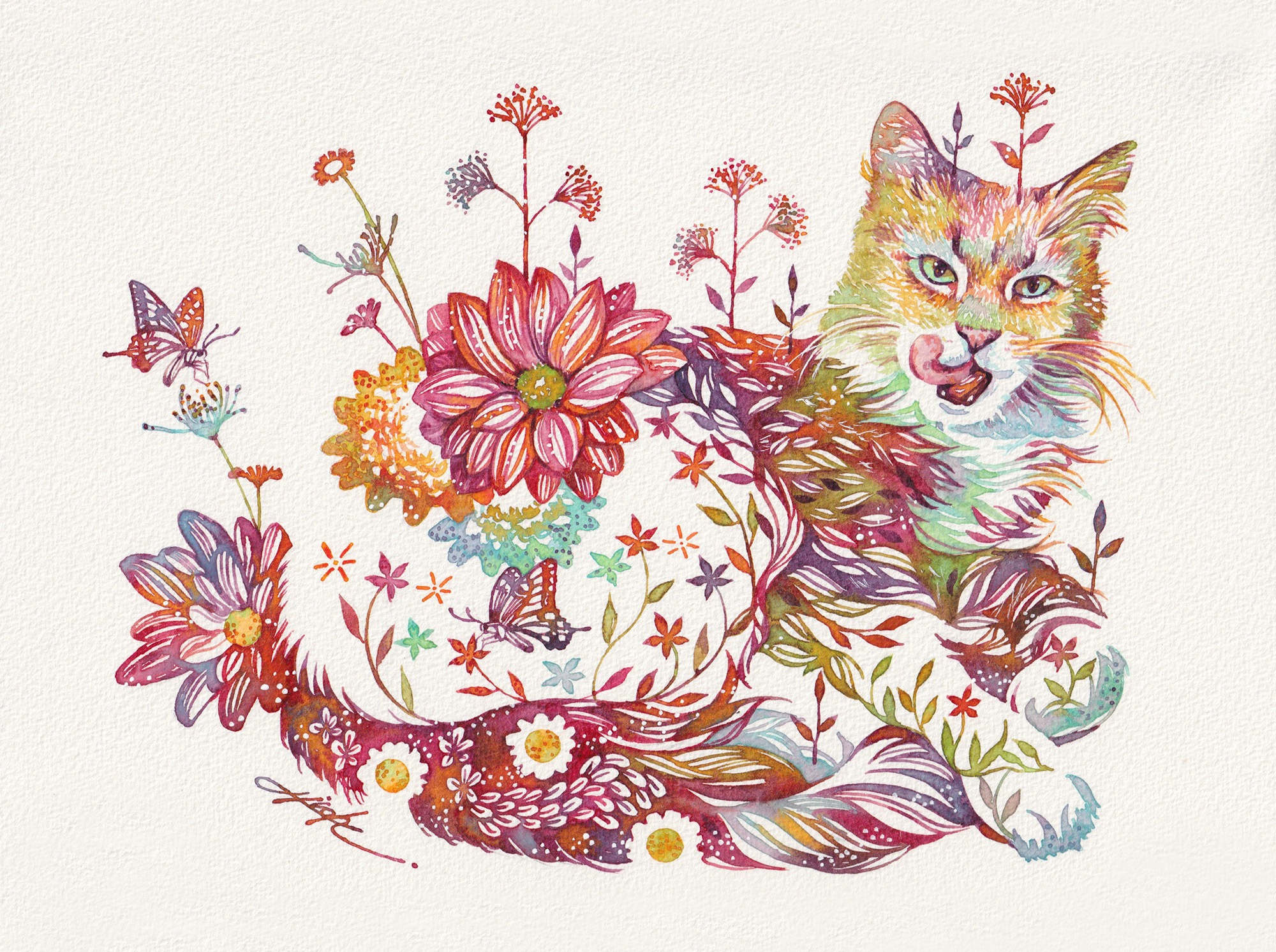 Titled “Tabby Tyrant,” the fantastical work is replete with juxtapositions: the individual and the collective, peace and war, industrial and classical architecture, and historic and modern. Minuscule soldiers wrangle a winged figure, a mouse swallows a human whole, and a team of warriors is outfitted with anachronistic weapons, although every action is in service of the feline ruler. Depicting disquieting and eerie actions, each scene is presented through opulent, gilded tableaus.

For more of Kuksi’s densely layered artworks, pick up a copy of his book Conquest and follow him on Instagram. Cats, dogs, and other mammals are known to mark their territories in myriad ways, but pet owners in Brussels have discovered a more enduring and inviting method. What began as a single project by artist Ingrid Schreyers spurred a municipality-wide initiative: the government of Schaerbeek, a suburb bordering the city of Brussels, now installs any mosaic, either created by residents or a local artist like Whitney Orville, free of charge. Many people are choosing portraits of their furry companions, although the idiosyncratic designs range from playful depictions of wildlife to urban scenes.

We’ve gathered some of the street-side assemblages here, but check out this Instagram account documenting the public art initiative for hundreds more. You also might enjoy these Japanese manhole covers and a similar mosaic-centered initiative to fill potholes.