Like a burst of color on an otherwise grey canvas, a single majestically colored building rises out of a sea of dull grayness. This is not Christo’s latest “wrapping” project, which is what the photographer Peter Steinhaur first thought, naturally, upon encountering the phenomenon. In fact, these are construction sites wrapped in a colorful mesh material, a traditional method employed in Hong Kong to prevent debris from falling onto the streets below. According to Steinhauer, who’s lived and worked in Asia for the last 21 years – but was stunned to discover this unique construction method in Hong Kong – buildings are wrapped regardless of whether they’re coming up or going down. I’ve seen a similar method employed in Japan with smaller houses, but never anything of such monolithic scale. You can see many more photos over on Steinhauer’s site, where he has two series aptly titled “Cocoon.” (via Featureshoot) 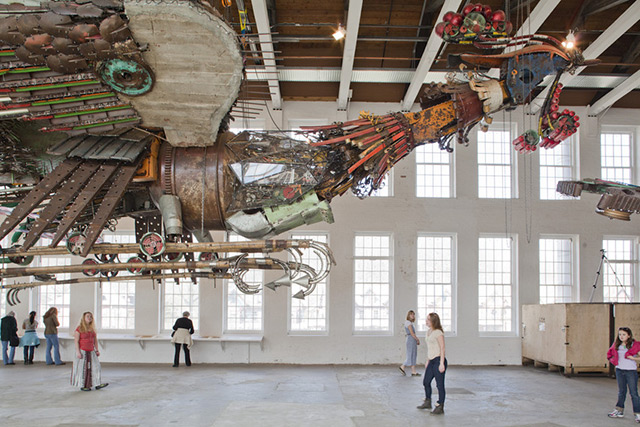 Chinese artist Xu Bing has several works currently on view as part of an exhibition at Mass MoCA in Massachusetts. Among the works are two 12-ton birds titled Phoenix that fill the museum’s football field-sized Building 5. Two years in the making, the birds were constructed from materials collected at various Chinese construction sites including demolition debris, steel beams, tools, and assorted remnants of migrant laborers. The male Phoenix titled Feng measures 90 feet long, and the female, Huang, is nearly 100 feet in length from beak to its steel tail feathers. Both birds are illuminated from within through a network of lights.

Somewhat similar to artists Yao Lu and Ai Weiwei, Xu Bing seems to be commenting on China’s rapid commercial development that is drastically altering the physical and cultural landscape within the country. Phoenix will be on view October 27th. (via junk culture, hyperallergic, my modern met)