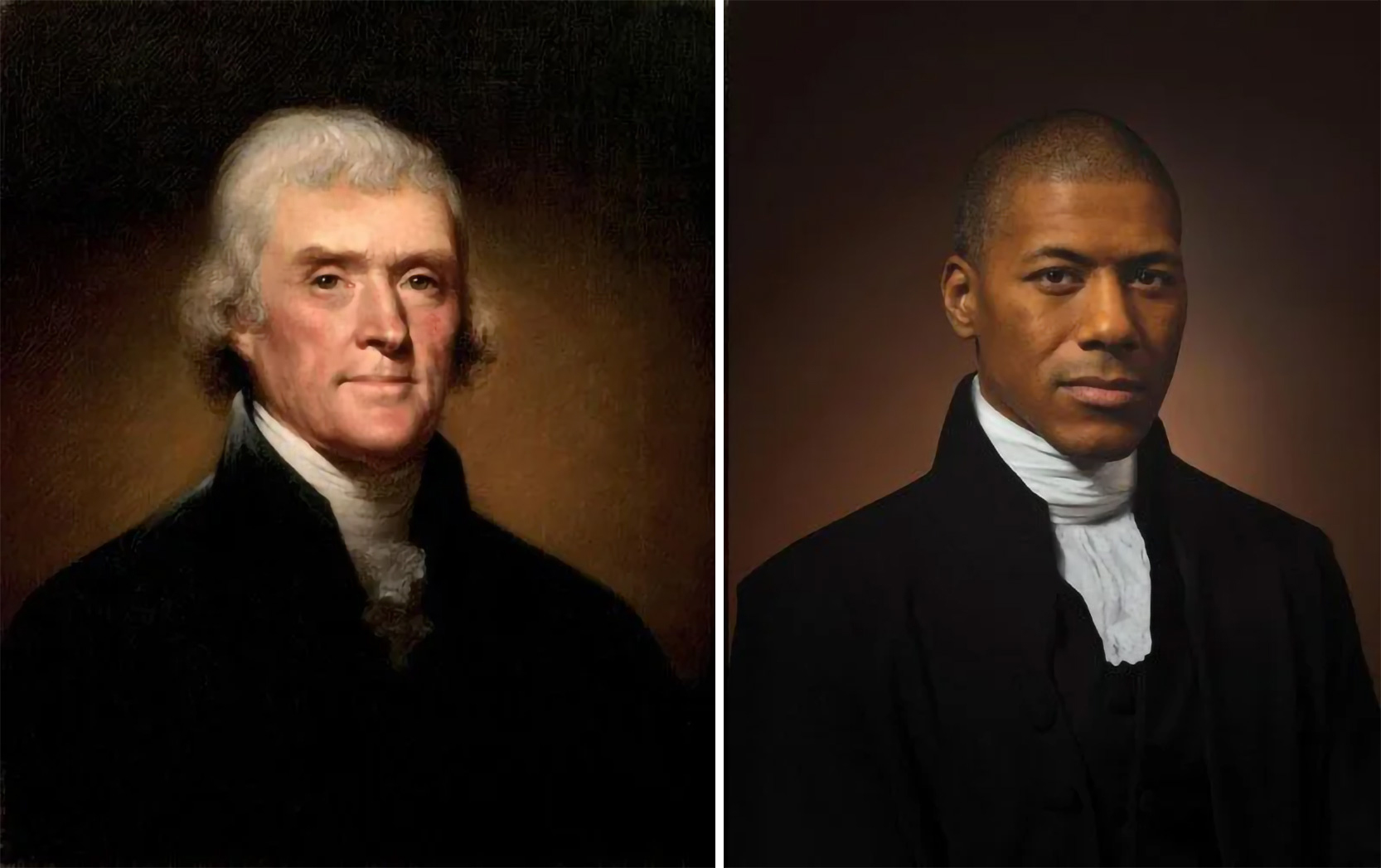 To prepare for a recent portrait, Shannon LaNier pulled a black coat over his head and wrapped a thick, layered collar around his neck, a costume to match what Thomas Jefferson wore in an iconic 18th-century painting. The Houston news anchor was participating in an ongoing series by British photographer Drew Gardner that recreates photographs, paintings, and other images of historical figures by styling their descendants in similar garb. LaNier’s photograph is particularly significant, though, because he’s the sixth-great grandson of Jefferson and Sally Hemmings, who the third U.S. president enslaved and forced to bear his children, a story that’s long been left out of historical narratives.

Titled The Descendants, the project is a visual excavation of Western history that questions what remains after generations pass. The relatives of historically significant people are, for the most part, out of the spotlight, but as the photographer notes, their ancestors’ “DNA is walking down the street.” The project began about 15 years ago when Gardner’s mother mentioned that he resembled his grandfather. Although the current project has diverged from simple likeness—the photographer notes that similar features are not a requirement when searching for descendants—he hopes to inspire questions about people’s legacies. “I am not saying they look like their forebears,” he notes. “I’m encouraging a debate. I want to provoke a conversation that makes people curious about history.” Since its inception, he’s photographed relatives of Frederick Douglass, Lisa del Giocondo, Berthe Morisot, and Napoleon.

Gardner’s criteria for choosing subjects is strict: the historical figure must be widely known to the public and have made a significant impact that goes beyond simple celebrity. The next step involves tracking down paintings, photographs, and other realistic representations of the person, which eliminates a considerable number of prospects—originally, Gardner hoped to recreate an image of Pocahontas but soon realized that only a woodcut existed. The photographer then searches for living family members, sometimes working through more than a dozen generations to find someone within 15 years of age of the forebear. Often with the help of museums and other institutions dedicated to historical preservation, he contacts the relative to ask if they’ll pose for a portrait. To maintain the integrity of the original image, the costumes and props are vintage, when possible. Some elements, though, like the massive, rusted chains forming the backdrop of Isambard Kingdom Brunel’s portrait from 1857, don’t exist anymore. When the authentic items aren’t available, Gardner recreates them in physical or digital form.

For LaNier’s portrait, though, the situation was different. While he is dressed similarly to Jefferson, he diverges because he chose to forgo the wig his sixth-great grandfather wore.  “I didn’t want to become Jefferson,” he told Smithsonian Magazine. The result is a striking set of portraits that explore historical truths. “Jefferson may have been a founding father, but I am an image of what his family has now become,” LaNier says in an interview about the experience. “You look at my family and you see every color in there, as you will see from many family’s that have come from slavery.”

Although the pandemic has changed his immediate plans for upcoming recreations, Gardner is hoping to release more pieces in 2021, which you can follow on Instagram. For those interested in a behind-the-scenes look at his process,  Smithsonian Magazine has released videos of the Douglass, Jefferson, and Elizabeth Cady Stanton shoots. 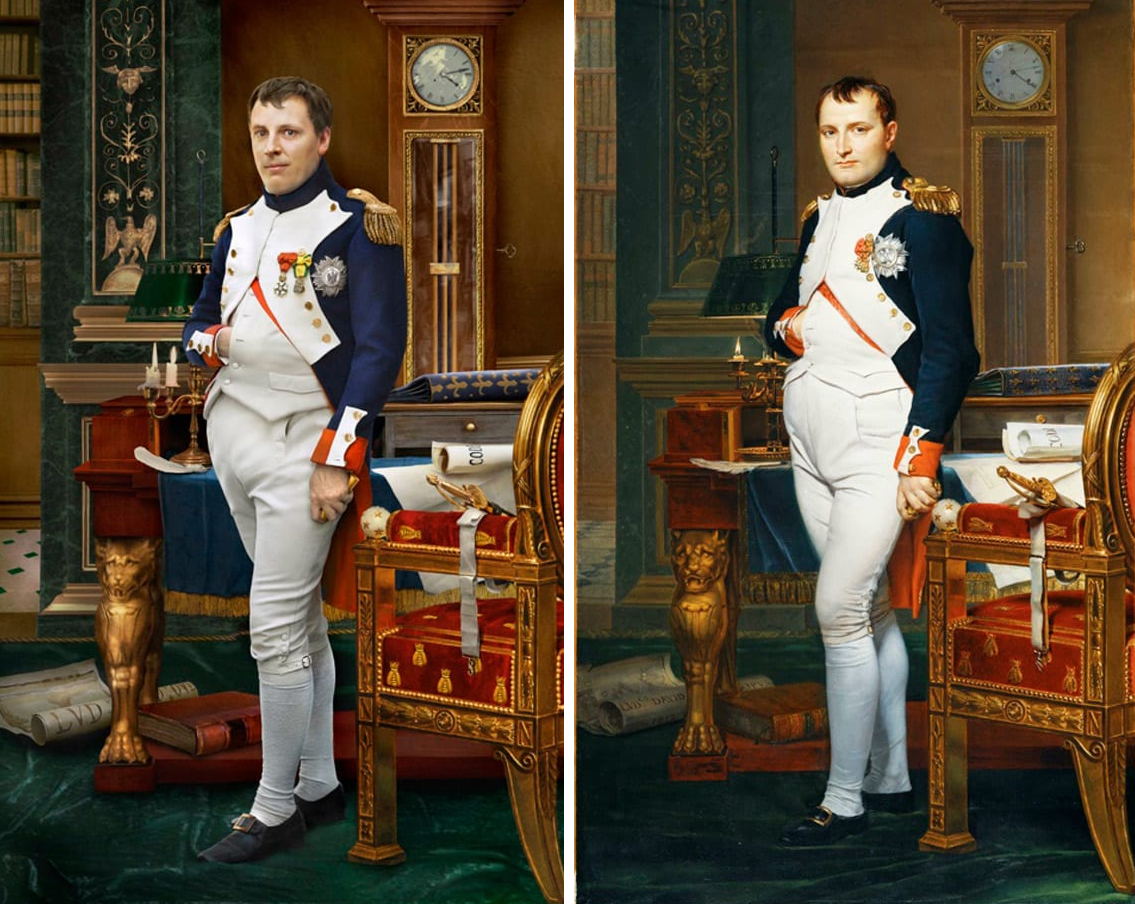 Courtesy of Tavares Strachan, all photography and video by Tom Powel Imaging.

What Will Be Remembered in the Face of All That is Forgotten is a sculptural neon work by the New York City-based artist Tavares Strachan made between 2014-2015. The five-foot-tall piece includes pulsating neon that mimics the racing of blood through veins, stainless steel to hold the skeleton in place, and a total of seven transformers. The flashing circulatory system is a glowing reminder of English scientist Rosalind Franklin’s contributions to the field of science, mainly the discovery of DNA’s molecular structures. The work was originally included in the solo exhibition Seeing is Forgetting the Thing that You Saw at Anthony Meier Fine Arts in San Francisco, which examined individuals whose names have been omitted from common accounts of history despite their great accomplishments.

Strachan, in partnership with LACMA Art + Technology Lab and SpaceX, also recently launched a sculpture honoring Robert Henry Lawrence Jr., the first African-American to train as an astronaut with NASA. Although Lawrence never made it into space, a 24-karat gold urn with his bust titled “Enoch” will orbit the Earth for seven years in a sun-synchronous orbit. You can see more of Strachan’s sculptural work, and keep up-to-date on the location of Enoch, on Instagram.