Barcelona-based artist Cinta Vidal has previously produced fictionalized architectural paintings that study how individuals with differing perspectives can view and inhabit the same world. Vidal crafts her visual metaphors by placing subjects onto floating islands, presenting each with a different vantage point depending on their chosen location. In her newer series of works, Vidal focuses more intently on intimate relationships, populating her suspended clusters of furniture, animals, and household objects with only two or three individuals rather than a larger population.

Her Couples series places pairs of characters in opposition to each other, exaggerating her previous explorations of human understanding. In these works two male figures sit back-to-back as they type on their own laptops, a woman peers longingly from an armchair as a man stands facing the opposite direction below her chair, and a boy photographer and woman stare at the same scene, but from flipped perspectives. These works show how two people might hold differing ideals, despite occupying the same community or household.

The included paintings will be presented alongside a mural in Vidal’s upcoming solo exhibition Viewpoints at Thinkspace Projects in Los Angeles from September 15 through October 6, 2018. You can view more of the artist’s gravity-defying works on her website and Instagram. 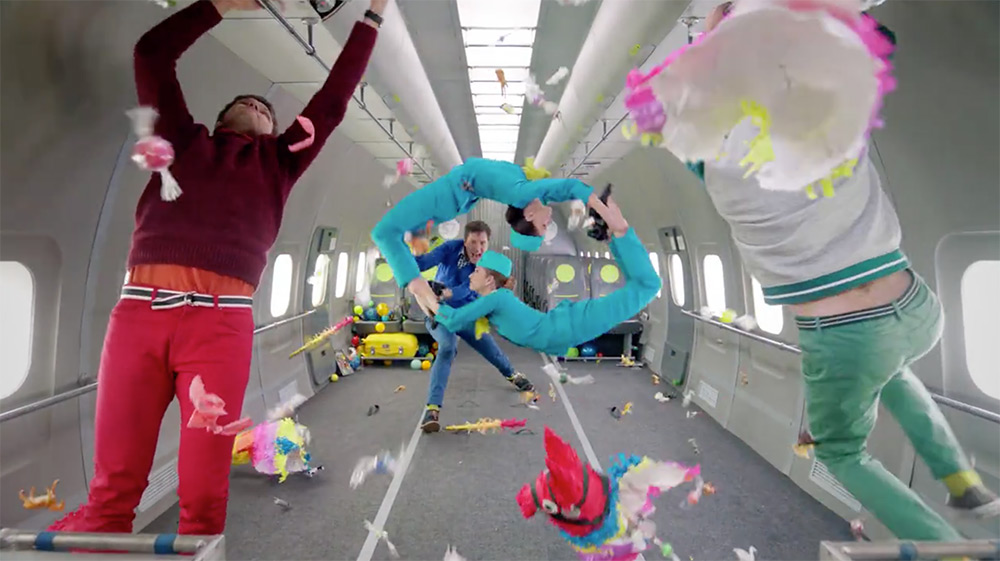 Barcelona-based Cinta Vidal (previously) produces complex architectural constructions to express how differently individuals can occupy the same world— each inhabitant carving out their own nook, cranny, and path within a similar environment. Her new acrylic on wood panels continue to serve as a metaphor for the difficulty of understanding those around us, especially while distracted by navigating our own complicated existence.

Vidal’s paintings set domestic and natural environments in their own gravity-defying orbit, making small planets out of Bauhaus homes, secluded camping spots, and cacti-filled parks. The characters included in each work seem unaffected by the others around them, many wistfully daydreaming or lost deep within a book.

This past December Vidal presented four works with Thinkspace Gallery at Scope Miami Beach and will also show a few with the same space at the LA Art Show from January 27-31. You can read more about Vidal’s process and architectural works on her blog here. Austrian director and visual artist Clemens Wirth created this gorgeous visual feast of gravitational experiments called Gravity. With the exception of a segment depicting digital black fabric, all the visuals were made with practical effects inside a special rig that can be rotated 360° with or without the camera. Wirth says he found inspiration both from the film Inception, and a similar project from a few years ago by Feedme Design. (via swissmiss, Vimeo Staff Picks) The Inverted Architecture and Gravity-Defying Worlds of Cinta Vidal 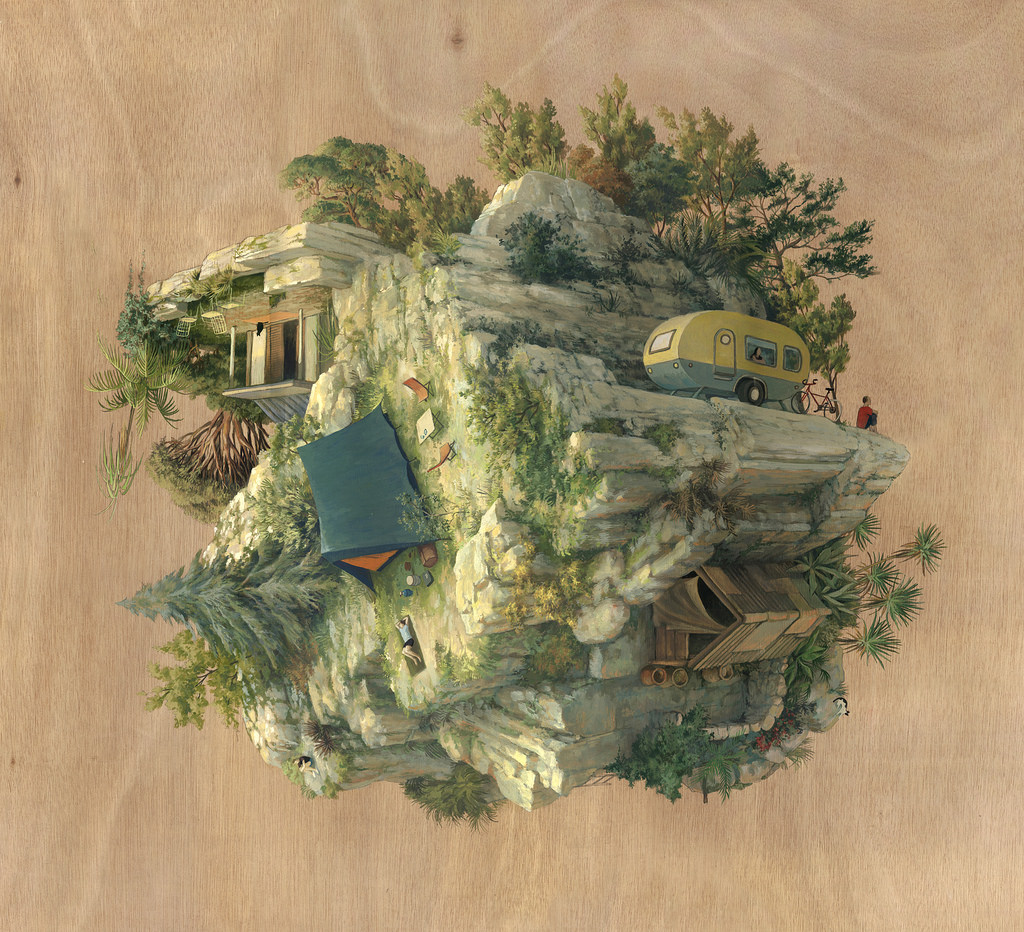 In her latest series of paintings, Barcelona-based artist and illustrator Cinta Vidal Agulló defies gravity and architectural conventions to create encapsulated scenes of intersecting perspectives. Painted with acrylic on wood panels, Vidal refers to the paintings as “un-gravity constructions” and says that each piece examines how a person’s internal perspective of life may not match up with the reality around them. The intersecting planes on many of her paintings are somewhat reminiscent of drawings by M.C. Escher, where every angle and available surface is inhabited by colorful characters going about their daily lives. She shares in a new interview with Hi-Fructose:

With these un-gravity constructions, I want to show that we live in one world, but we live in it in very different ways – playing with everyday objects and spaces, placed in impossible ways to express that many times, the inner dimension of each one of us does not match the mental structures of those around us. The architectural spaces and day-to-day objects are part of a metaphor of how difficult it is to fit everything that shapes our daily space: our relationships, work, ambitions, and dreams.

Vidal just opened a new exhibition of work at Miscelanea BCN in Barcelona and you can read an in-depth conversation with the artist on Hi-Fructose. 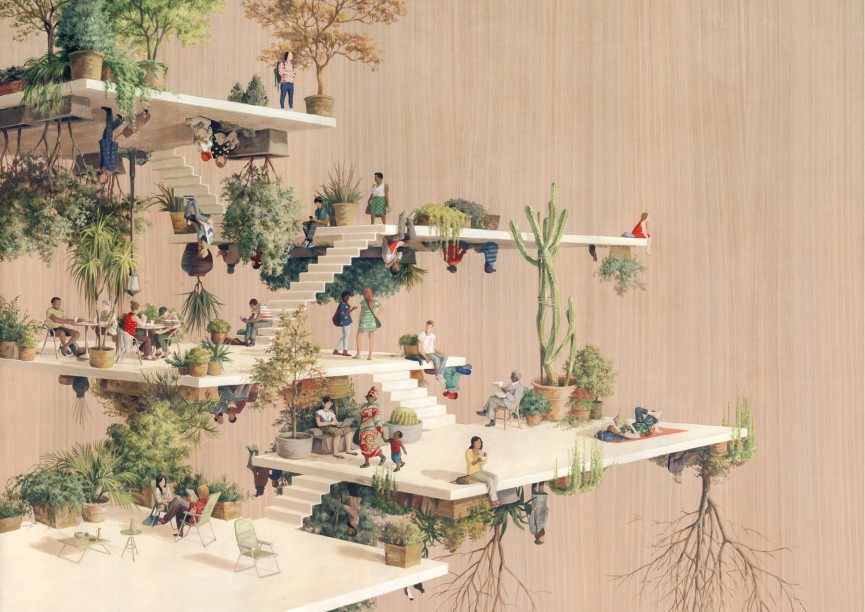 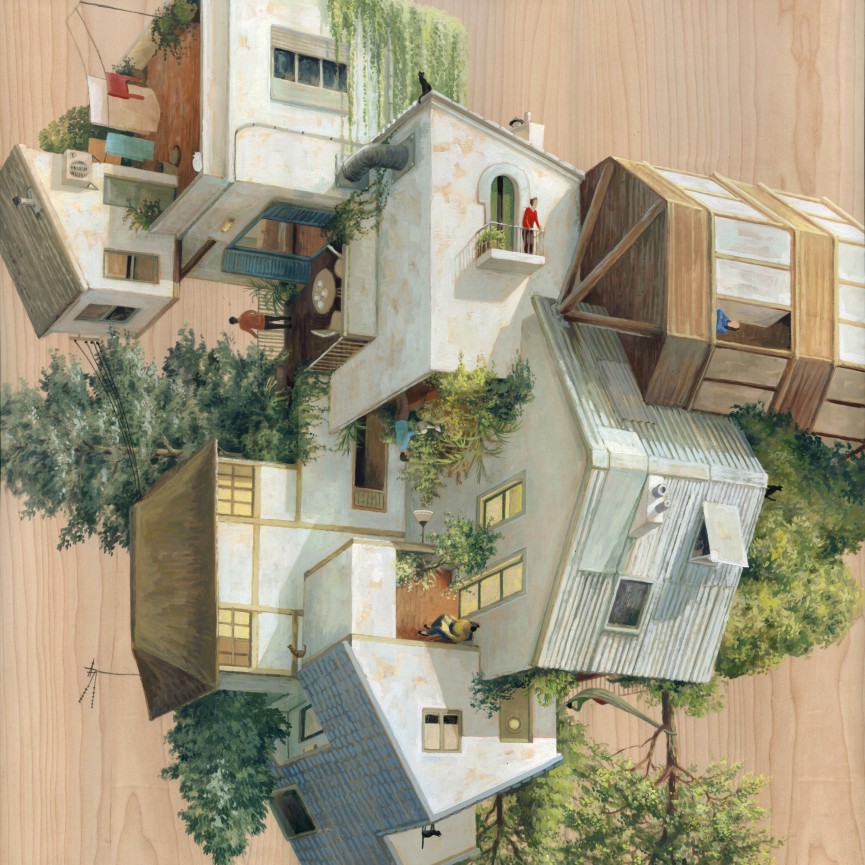 First: watch the video. Twenty-five year old, Toronto-based artist Amy Shackleton paints these lusciously drippy paintings without use of a brush or fingers, instead she relies on good old gravity (and occasionally string as a guide) to move the paint slowly across the canvas in delicately controlled pours. The video above captures the somewhat tedious yet brilliant process in detail, as a 30-hour painting session condensed into two minutes. I find this so unbelievably amazing and beautiful. See more of her work here, and you’ll have a chance to see it in person at Art Toronto 2011 in October. (via gizmodo)