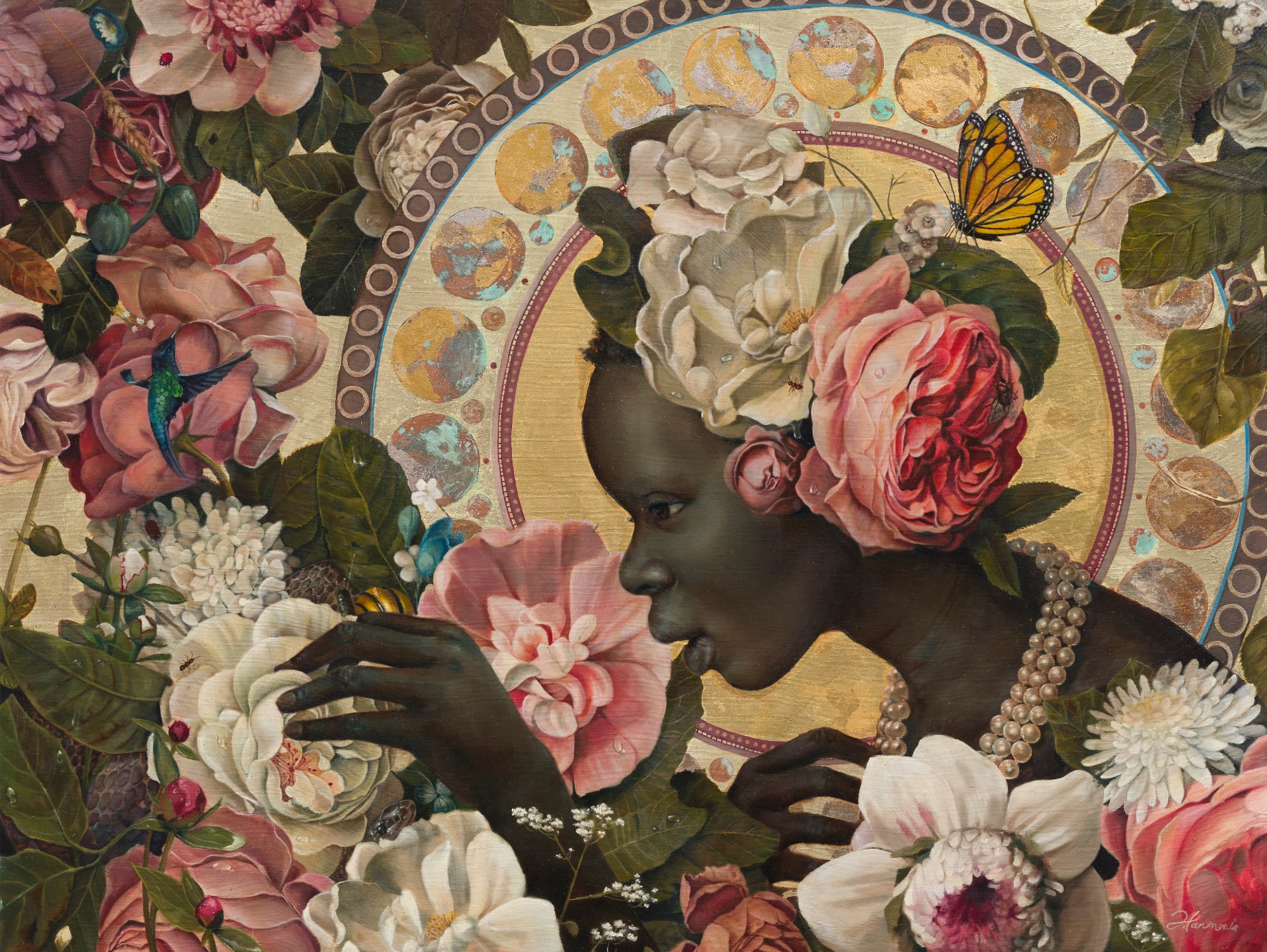 “Beyond the Peonies” (2022), oil on wood panel, 36 x 48 inches. All photos by Jeff McLane, courtesy of the artist and UTA Artist Space, shared with permission

At the heart of Garden of Eve, Harmonia Rosales’ comprehensive exhibition at UTA Artist Space in Beverly Hills, is the power of narrative. The show spans years of Rosales’ career, featuring dozens of portraits in oil and perhaps the grandest work she’s produced thus far: encircled with lights, an upturned ship towers over the gallery, allowing viewers to pass underneath and peer upwards at the frescoed expanse.

Referencing the vessels utilized in the transatlantic slave trade, the lofty structure re-envisions the ceiling of the Sistine Chapel and uses Michaelangelo’s Renaissance works as a blueprint to recast Genesis through the lens of female empowerment and Orishas, deities in religions of the African diaspora. Dozens of Rosales’ paintings, like “Birth of Eve” and her 2017 “Creation of God” that garnered viral attention, cloak the ship with a narrative that’s both widely recognizable and subversive in its telling, with Black and Latinx subjects at the center. “I didn’t want it to be a chapel ceiling because then that’s against everything I’m trying to convey, especially with this Yoruba religion,” Rosales shares with Colossal. “So why not put it on the undercarriage of a slave ship, the very thing that brought these stories to us?” Now based in Los Angeles, Rosales has roots in Chicago, the city where she began pursuing her art practice full-time and where she first conceived of the installation. Five years in the making, the project is a testament to the artist’s dedication to long-term thinking. Her process is relatively slow and requires as much research as hours at the easel, meaning she generally produces less than ten works each year. Back then, Rosales says, “I was trying to hide behind my paintings. I was thinking that, okay, if I just paint, people will understand that, but I knew I had to really speak on the paintings myself. This time allowed me to feel comfortable and to curate my message better in a way where all can understand.”

Rosales has long been concerned with communication and comprehension, particularly as she brings lesser-known deities into the mainstream and elevates such religious figures to the status of those within ancient Greco-Roman myth and the Christian iconography that have dominated much of art history. “All along, with all of these exhibitions, I was creating puzzle pieces, pieces to the Sistine Chapel,” she says about the smaller paintings. “Now people can go back and really understand it.”

Many of the works collapse time periods and blend references, like “Forbidden Fruit,” which centers on a woman encircled in a gold halo eating a slice of the pink melon. “Ever wonder why watermelon became a cruel stereotype?” Rosales asks. “It was the one fruit that symbolized Black self-sufficiency after emancipation.” Similarly, the titular work, “Garden of Eve,” centers on Yemaya, the mother of all Orishas in the Yoruba faith. Shielding her face from the chaos of children and florals, the spirit witnesses “the disruption of her perfect garden, (which) intentionally parallels the disruption of the African continent.” Ultimately, Rosales wants to question dominant Eurocentric narratives and to expose that the Orishas and religions she’s referencing are as old, enduring, and relevant as others. “What came first? Why have these gods been hidden? Why haven’t they been mainstreamed?” she posits. “To hide these gods, thus our identity, it’s keeping us in check. The more that they get out, the more that we are realizing that this is old. It strengthens us as a whole.”

Garden of Eve is up through November 30 in Beverly Hills. Rosales will continue working within stories of creation as she prepares for her solo show opening in March at Memphis Brooks Museum of Art. Until then, find more from her on Instagram. A photo of an illuminated ship in a gallery Chicago-born artist Harmonia Rosales says her striking portraits speak to “the part of me that has been the least represented in our society.” Rosales tells Colossal that much of her work⁠—⁠she largely features a central Black figure surrounded by floral and animalistic details—is linked to her Afro-Cuban background. “I empower women of color through art that challenges ideological hegemony in contemporary society,” she writes. “The Black female bodies of my paintings are the memory of my ancestors expressed in a way to heal and promote self-love.”

In “Harvest,” a seated woman holds three children, while two others gather at her bare feet. A small stack of nondescript books, a brown skull, a broken string of pearls, and a writhing snake line the steps, providing contrast between the natural and human-made elements. Although she often utilizes religious iconography, like in her Orisha’s series, Rosales says she hopes instead to give her viewers healing tools rather than spiritual indoctrination. Frequently offering alternative portrayals, Rosales’s 2017 work “The Creation of God” garnered viral attention because the artist presents God as a Black woman.

Rosales’s upcoming project Miss Understood, which considers the relationship between feeling dissociated from ancestral cultures and still trying to protect that history in America, will be on view at MoCADA in Brooklyn from February 28 to April 16. Head to the artist’s Instagram to follow her profound projects, and check out the pieces she has for sale on Artsy.