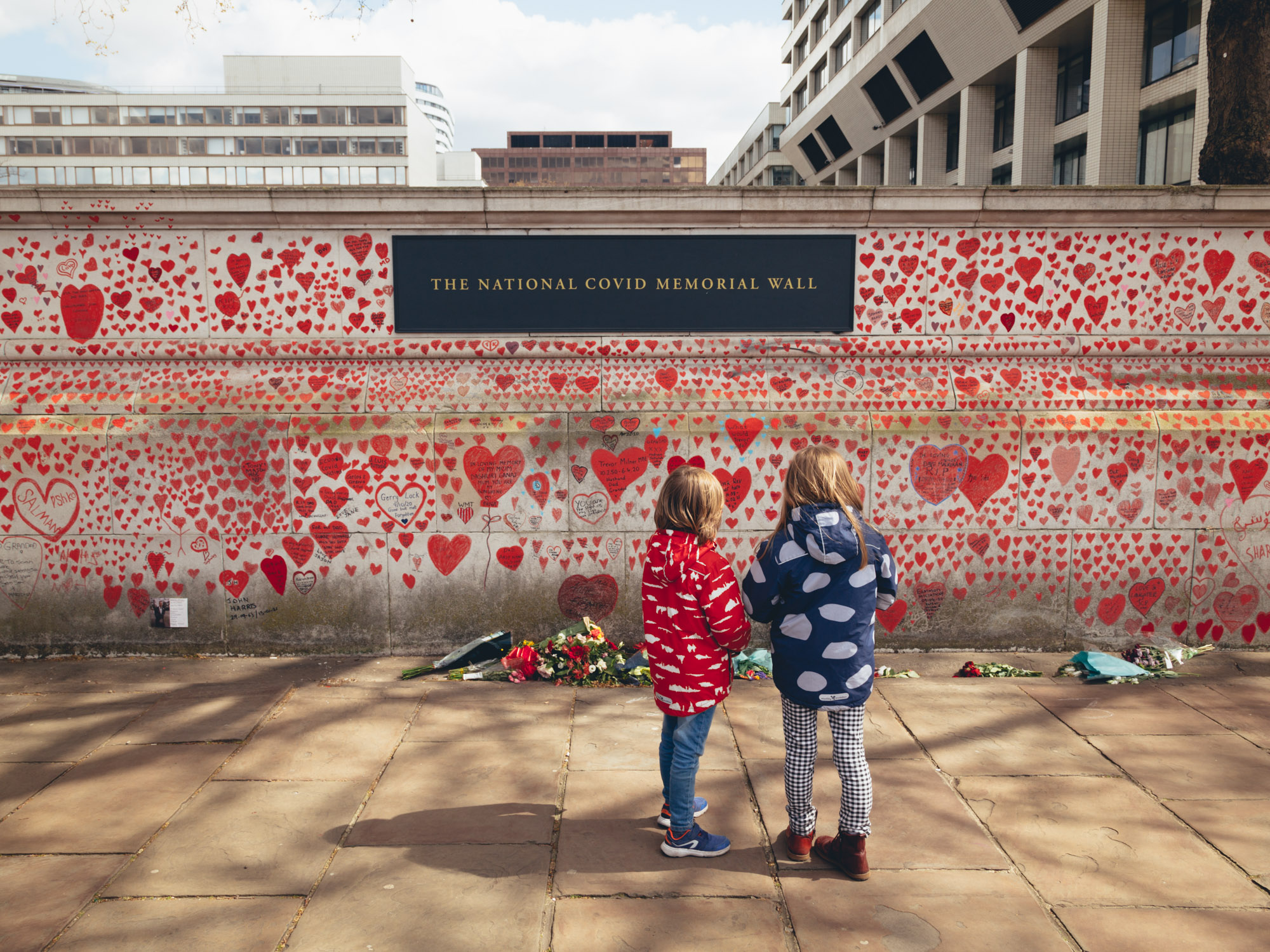 All photos © Henri Calderon for Colossal

Nearly 500 meters of small, red hearts will soon cover an expanse of concrete facing the River Thames in London. Now dubbed the National COVID Memorial Wall, the poignant display publicly commemorates the 150,000 lives lost to the coronavirus pandemic in the United Kingdom so far. Each heart represents one victim, with short messages of grief, love, and remembrance scribed by loved ones in their centers. It takes about ten minutes to walk by the entirety of the project, which serves as a staggering reminder of the virus’s devastation.

Coordinated by COVID-19 Bereaved Families For Justice, the two-meter-high wall is situated between the Westminster and Lambeth bridges, opposite the Houses of Parliament. According to The Guardian, Matt Fowler helms the ongoing project, which he began a few weeks ago by painting 15,000 hearts on the facade. His father died from the virus last April. “When you see all the hearts and think what each one represents, it’s absolutely frightening,” Fowler says.

Organizers still are raising money for supplies to complete all 150,000 hearts—although official government statistics currently reflect 149,000 deaths, which is the largest loss in Europe—that volunteers will continue to paint to account for all victims. Talks are also in the works about preserving the memorial to ensure that it’s a permanent fixture in London.

This past weekend, photographer Henri Calderon captured images for Colossal that document the memorial’s progress, which you can see below. 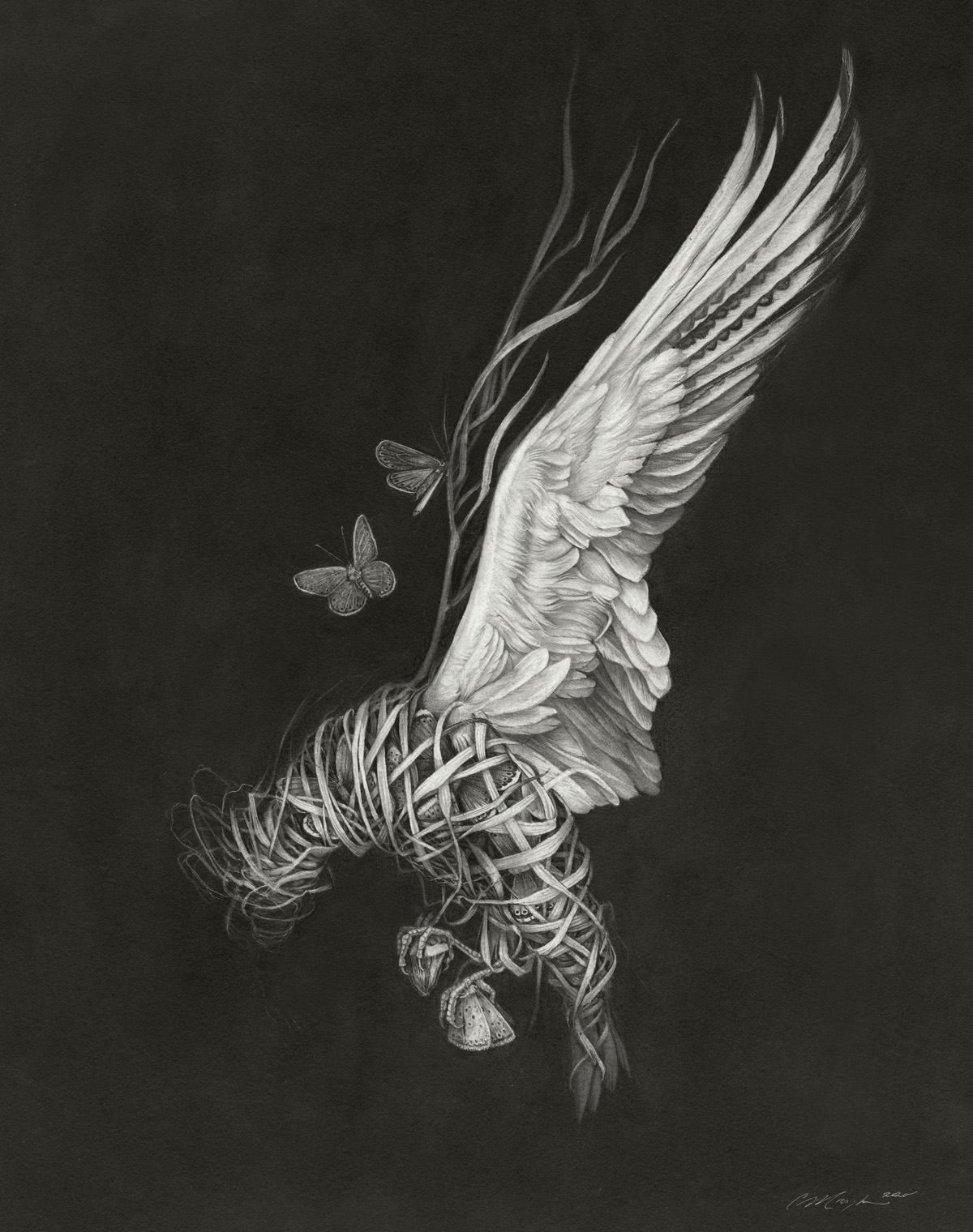 Just as they’d carry a seed to a new location, the birds in Portland-based artist Christina Mrozik’s latest series tightly grasp pulsing hearts in their talons. The graphite illustrations intertwine masses of feathers and avian body parts with the still bleeding organs, suggesting that they recently were ripped from the chests to cause their descent.

Coraticum—cor means heart in Latin—is an exploration of reconstruction, one that’s defined by bringing the heart outside the body. “It represents the beginning place from which feelings unfold, the center, the seed. I see this as the place before the stem or the root, before the flower or the honey,” they say. As a whole, the series considers the difficult emotions necessary for transformation. Mrozik (previously) tells Colossal the project was born out of personal upheaval in their life, which they explain:

I had been undergoing a major rearrangement in my relationship, rewiring my brain’s response to chronic pain and learning about the history of trauma on my nervous system. The way I moved internally was under massive rearrangement and self-scrutiny, and I was doing my best to find where to put things. Then quarantine hit and it felt like the work of rearrangement was happening externally on a global level.

Each monochromatic illustration is connected to a specific step of the reconstruction process: “The Eye of Recollection” to memory, “Safekeeping” to self-preservation, “The Ten Intuitions” to desire and instinct, “Colliding in Reverse” to letting go, and “Untethering Permissions” to questions about authority.

Coraticum is currently on view at Portland’s Antler Gallery, which will be sharing virtual tours of the solo show in the coming weeks. You can find prints, pins, and books of Mrozik’s surreal compositions in their shop, and follow their work on Instagram. (via Supersonic Art) Here’s a fun new animated mural by Croatian artist Lonac (previously) who painted this anatomically-correct heart complete with an air duct aorta using nothing but freehand spray paint. You can take a peek at some of his ongoing projects over on Facebook.