Norwich-based 3D illustrator and animator AJ Jeffries released a new animation that feels particularly relevant to modern life. Simply described as a story about “a horse, struggling to exist,” the short film chronicles the evolution of a pink animal as it morphs from a blob into a fully realized mare. Its body bends and contorts—at one point, its neck even shoots up to the sky, killing a purple bird—before it gets some encouragement from nearby plants and happily dances away. To check out more of Jeffries’s relatable projects, head to Instagram, Vimeo, or Behance. A girl is seen softly touching the nose of a giant, white horse frozen in mid-air within the Argentinian Pavilion of this year’s Venice Biennale, a large sculptural work by artist Claudia Fontes. The Horse Problem, and the Argentinian Pavilion, are located within the biennale’s Arsenal building, the largest pre-industrial production center of the world. Made long ago from wood, bricks, and iron, the building is one that could have only been built by horse-power, the work highlighting the hidden influences the animal had on the city.

The installation, which also features 400 white rocks scattered around the two central figures, is inspired by 19th-century icons around which Argentina’s national presence was falsely based. Fontes uses these borrowed characters in her present work to examine how nations develop across history, especially in her own country of Argentina.

“By highlighting how the destinies of the human and horse species have been intertwined through exploitation from the very moment that horses were domesticated, The Horse Problem offers in a flash, a way to reinterpret history in a different way, a chance to construct an alternative narrative for our future as species,” said Gabriel Giorgi in his essay for the work’s catalogue.

The Horse Problem is curated by Andrés Duprat, director of the National Museum of Fine Arts of Argentina. You can see Fontes’ work in the 2017 Venice Biennale through November 26, 2017. (via Art Ruby) Artist Sculpts a Horse from Molten Glass in Under Two Minutes

In a period of about 90 seconds, this glass artist transforms a molten blob of glass into a horse using little more than a pair of huge tweezers, gravity, and a lifetime of practice. Not completely sure who the artist is, but the YouTube comments credit Francisco Lopez Serrano. (via Reddit)

Although major construction on Andy Scott’s imposing ‘Kelpies’ sculptures near Falkirk, Scotland ended last November, this new timelapse from the Helix captures the enormity of the project in vivid detail. The gargantuan horse head sculptures completely dominate an otherwise flat landscape over the Forth & Clyde canal and promise to be a major attraction when they open to the public on April 21. The construction part takes up the first half of the video, you can jump to around 3:00 if you want to see pretty shots of the completed pieces. (via MeFi) The Kelpies are a pair of gargantuan horse heads by public artist Andy Scott that now tower over the Forth & Clyde canal in Falkirk, Scotland. The sculptures measure some 30 meters tall (99 ft.) and are meant as a monument to the horse-powered heritage of Scotland. According to Wikipedia:

The Kelpies name reflected the mythological transforming beasts possessing the strength and endurance of 10 horses; a quality that is analogous with the transformational change and endurance of Scotland’s inland waterways. The Kelpies represent the lineage of the heavy horse of Scottish industry and economy, pulling the wagons, ploughs, barges and coalships that shaped the geographical layout of the Falkirk area.

The sculptures were modeled on two actual Clydesdales from Glasgow City and were constructed from structural steel with a stainless steel cladding, creating structures that you will soon be able to stand inside of. Although construction is nearly complete, the Kelpies will not open to visitors until April 2014.

Scott has created a number of smaller ‘Kelpies’ sculptures including a pair here in Chicago and at Purdue University. 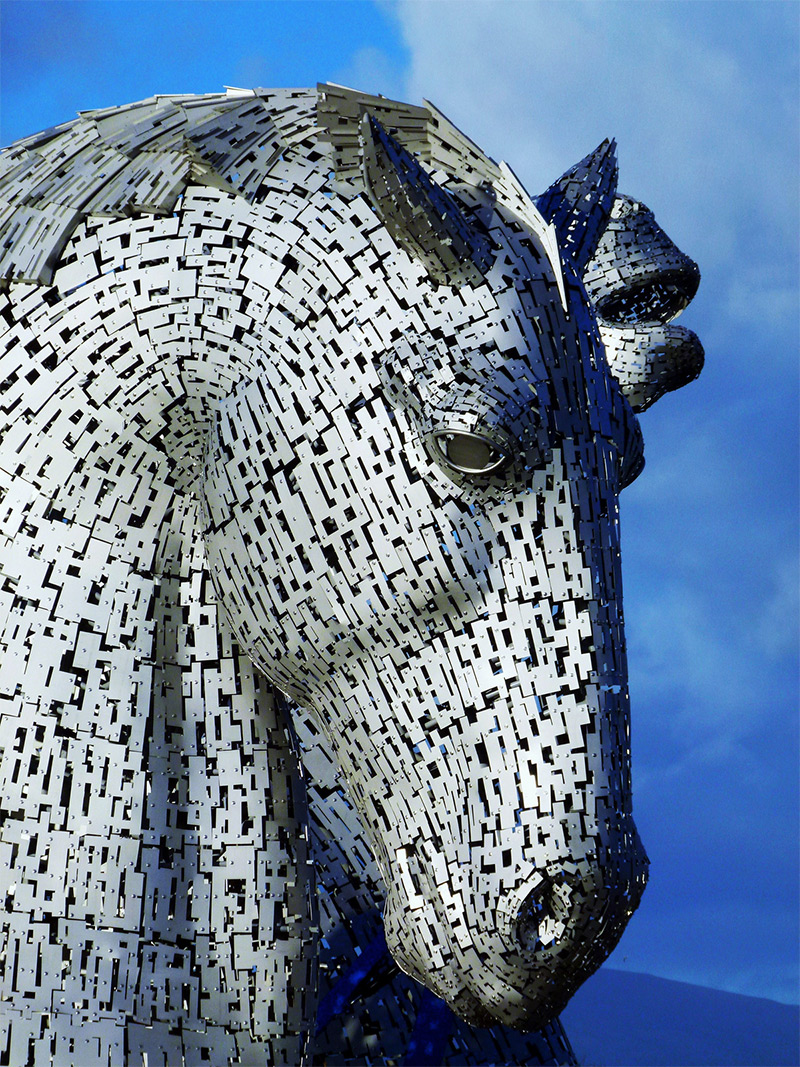 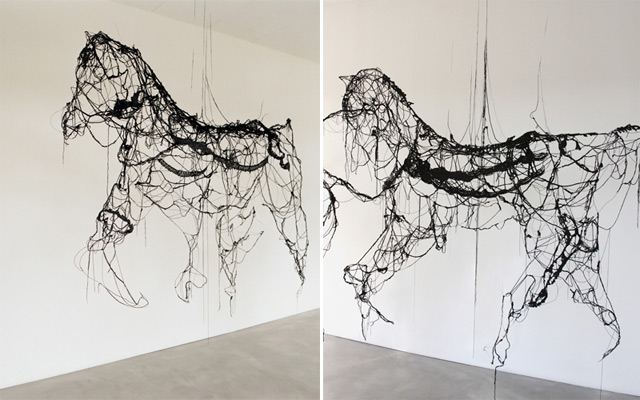 GoodBye Horses is a 2009 installation by artist Sandrine Pelletier at galerie Rosa Turetsky. The three galloping horses were created using suspended wool coated in black latex and tar, resulting in a stark contrast between the chaotic lines of the figures against the white gallery walls. From some angles the horses are unrecognizable, but even when brought into focus appear to be haphazard, almost violent illustrations. See much more on her website.