Created by London-based animator and artist Vier Nev, “A Mind Sang” plunges into an entrancing journey of life’s stages. The short film is centered on themes of transformation as it hypnotically shifts perspectives scene-by-scene. “It began with twenty drawings I had created about different cultural representations of birth and identity. I find that in my drawings I often come back to the same characters: queer couples, mothers, and, for some inexplicable reason, cats,” Nev said in a Vimeo interview.

Relying on pareidolia—the tendency to see objects or patterns where they physically don’t exist—each frame simultaneously depicts two different narratives. “I wondered if I could create a film that merged the stories of these characters into the same shapes and shadows,” Nev said. The characters seamlessly change from fully realized figures into amorphous shapes, animals, and single body parts throughout the illusory project.

Although Nev originally planned for the entire film to be black and white, he instead infused bits of crimson and shades of violet. “The two red moments are particularly special to me as they signal moments where blood (sangue) fills the frame,” he said. “First as fire and then as water, blood represents death or birth.”

“A Mind Sang” recently won a Staff Pick Award at the 2020 Annecy International Animation Film Festival. Check out stills of the transformative project on Nev’s Instagram, and follow his upcoming animations on Vimeo. The textured artworks serve as a site for conversation, prompting questions about race relations and societal injustices. “Textiles engage upon a search for belonging: studying the Black female body, personal identities, and a connection to Black history,” the artist tells Colossal. “I create colorful portraits of Black people who are leaders within their respective disciplines: the arts, music, sports, advocacy. It’s important to carry forward their message and have their legacy move through different channels, like my textiles.”

To keep up with Saunders’s socially engaged projects, follow her on Instagram, and several of the artworks shown here are available for purchase on her site. (via Design Milk) Amy Sherald grew up in Columbus, Georgia, which shaped her conceptions of identity and fundamentally influenced her artistic practice. “Acknowledging the performative aspects of race and Southernness, I committed myself to exploring the interiority of Black Americans,” the artist told Smithsonian Magazine in December 2019. “I wanted to create unseen narratives.”

Now living and working in Baltimore, Sherald paints distinctive portraits set against bold, vibrant backdrops. She renders each subject, who stares directly at the viewer, in her signature grayscale. “A Black person on a canvas is automatically read as radical,” she said. “My figures needed to be pushed into the world in a universal way, where they could become a part of the mainstream art historical narrative. I knew I didn’t want it to be about identity alone.”

When considering how Sherald titles her works, it’s not surprising that she reads voraciously: “She had an inside and an outside now and suddenly she knew how not to mix them” is a line from Zora Neale Hurston’s Their Eyes Were Watching God; Gwendolyn Brooks wrote “She was learning to love moments, to love moments for themselves” in Maud Martha; and “The lesson of the falling leaves” is a Lucille Clifton poem. Each explores the relationship between interiority and exteriority and the experience of Black Americans.

Notably, too, Michelle Obama chose Sherald to paint her official portrait, which was released in 2018. To see more of the artist’s portraits and follow her upcoming projects, head to Instagram. “What’s precious inside of him does not care to be known by the mind in ways that diminish its presence (All American)” (2017), oil on canvas, 54 x 43 inches 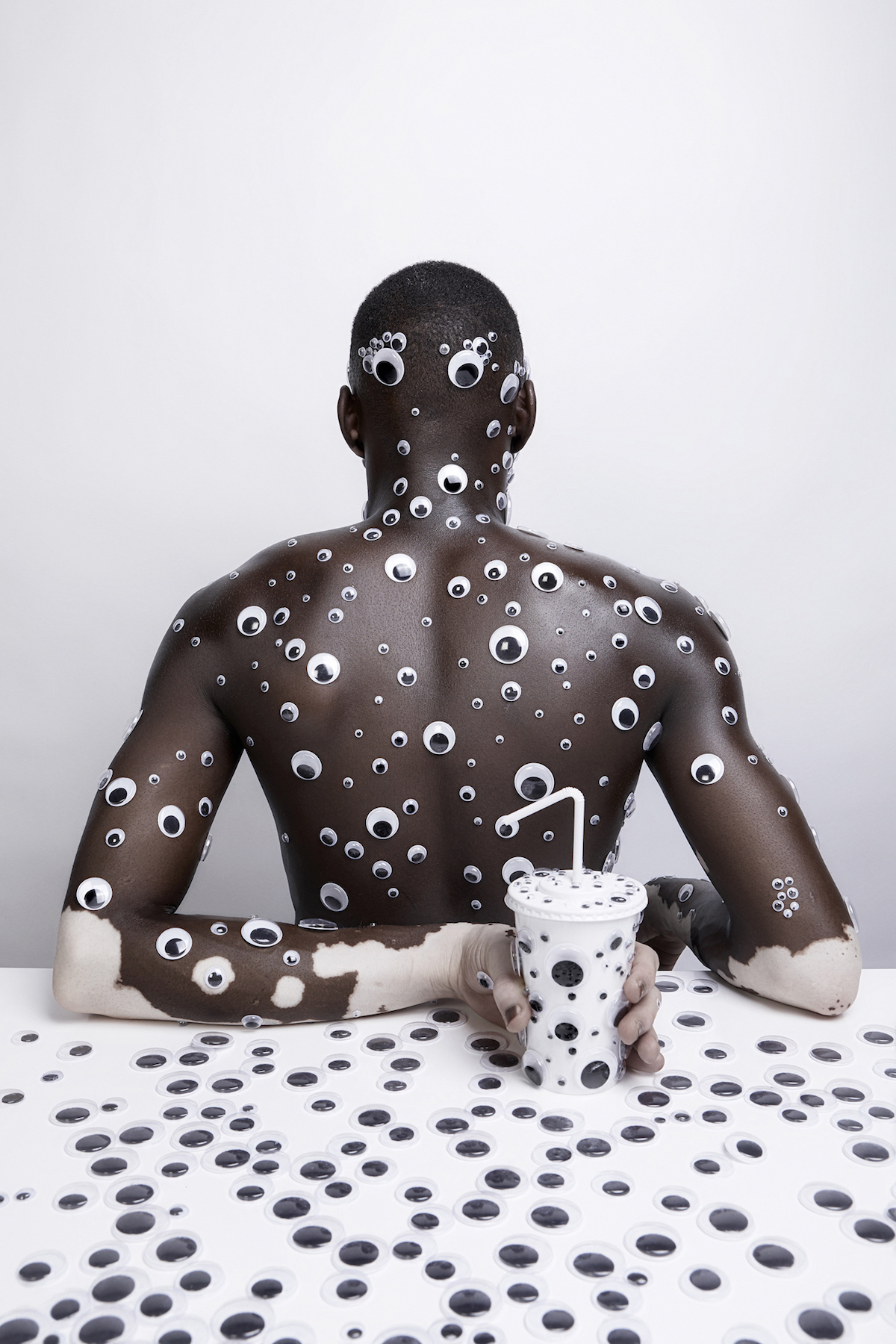 Photographer Justin Dingwall recently collaborated with South African model Moostapha Saidi on a series of images that speak to themes of perspective and of perception. “A Seat at the Table” was informed by Saidi’s experiences living with the skin condition vitiligo, in addition to conversations between the photographer and model. Taken at face value, the images showcase a man with missing skin pigment, but as the South Africa-based photographer explained to Colossal, the ideas and symbolism are more than skin deep.

Brightly colored and stark white sets contrast Moostapha’s dual-toned skin in each of the images. Dingwall uses precious stones and googly eyes as a commentary on the way that Moostapha is objectified by strangers who stare, point, and see him as an other because of the way he looks. “I worked with the old saying ‘a seat at the table’ to represent the idea of an opportunity to be heard, to be seen, to have a voice and an opinion, and in this way to make a difference,” he explains to Colossal. “The images that I have created with Moostapha aim to start conversations about preconceived ideas and perceptions based on appearance, and how what we see affects what we think.” Dingwall says that during his first collaboration with the aspiring model he learned about his story and about the disease that, at first, was a challenge and later became a source of pride and confidence. “Vitiligo is a topic that I did not know much about and I am always interested to expand my world through my art and learn about something that is not seen as ‘usual,'” Dingwall tells Colossal. “I decided to create a body of work that engages with this topic on a much deeper level, and that raises questions about perspective, as well as how the media and representations subjectively perceive the world and other people.”

Because of his appearance, growing up was difficult for Moostapha, Dingwall says, but things have changed. “Through these challenges he has gained strength and confidence from looking so different. He no longer sees his vitiligo as a hindrance, but as something precious and unique… As in previous bodies of work, I hope in these images to highlight beauty in difference. In these images it is now Moostapha who is staring back at the viewer. Questioning our gaze.”

“A Seat at the Table” has helped Saidi pursue his dream of becoming a model, as he is now signed to one of the top agency’s in South Africa. In 2019 Justin Dingwall plans to create more images in the series, has three new bodies of work planned, and a few upcoming exhibitions in Europe. Follow him on Instagram for future updates and to see more of his photography.