Within the small confines of her 3 x 6 meter studio in Seoul, JeeYoung Lee’s imagination is without boundaries. For each of her photographs the artist fills every square inch of space with hand-made props, set pieces, and backdrops and never edits or modifies the image digitally post-shoot. We first featured Lee’s work on Colossal last year, and OPIOM Gallery has since shared several more installations spanning from 2008 to 2014. Via OPIOM:

She does so with infinite minutiae and extraordinary patience, in order to exclude any ulterior photographic alteration. Thus materialised, these worlds turn real and concretise; imagination reverts to the tangible and the photo imagery of such fiction testify as to their reality. In the midst of each of these sets stands the artist, those self-portraits however are never frontal, since it is never her visual aspect she shows, but rather her quest for an identity, her desires and her frame of mind. Her creations act as a catharsis which allows her to accept social repression and frustrations.

It should be noted that Lee’s photography seems to be influenced, at least conceptually, by artist Sandy Skoglund. Her latest exhibition titled Stage of Mind will appear in both Bogota and Belfast later this summer. (via My Modern Met) 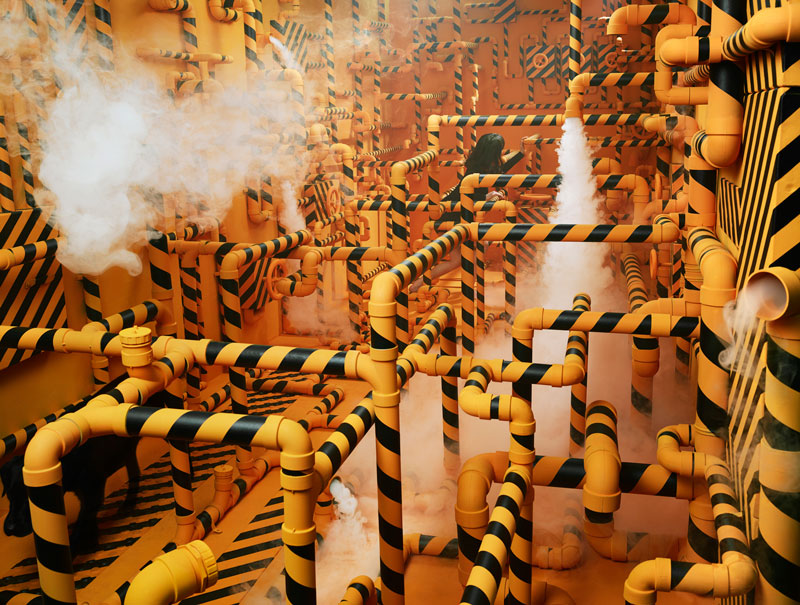 It’s always amazing to witness at artist who embraces one of their greatest limitations, turning it instead into one of their greatest advantages. For Korean artist JeeYoung Lee the question was how to utilize her small studio space in Seoul measuring 11.8′ x 13.5′ x 7.8′ (3.6m x 4.1m x 2.4m) that was proportionally miniscule to the scale of her boundless imagination. Instead of finding a new location or reverting to digital trickery, Lee challenged herself to build some of the most elaborate sets imaginable for the sake of taking a single photograph.

These surreal and dreamlike images are the result of Lee’s determination to share stories from her own life as well as various Korean fables by completely manifesting everything you see in reality. Lee labors for weeks and months to create the aspects of each scene complete with a multitude of handmade props, suspended objects, and unique lighting requirements, all of which might normally be ripe for the use of Photoshop that could shave weeks off production time—however the artist shuns all digital manipulation and instead focuses on creating even the most minute details by hand. A recent graduate of Hongik University in Seoul and recipient of the Sovereign Art Prize in 2012, Lee opens her first European exhibition at Opiom Gallery in Opio, France titled Stage of Mind starting February 7, 2014. You can read and see more over on My Modern Met.