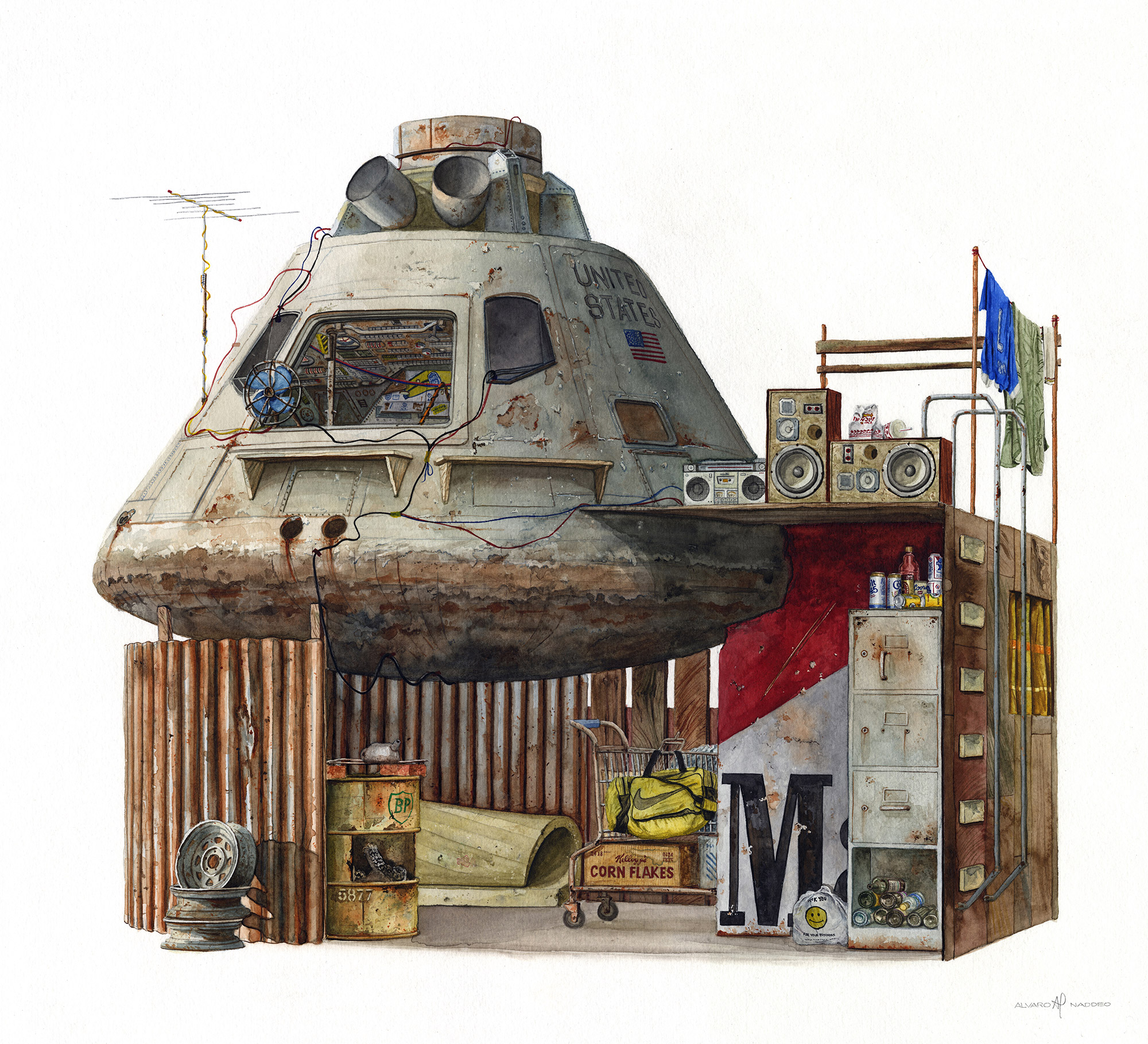 Behind each one of Alvaro Naddeo’s watercolor paintings is an imagined character who’s built a rickety shopping cart structure or gathered waste materials for a tiny, mobile dwelling. “I believe they are strong people, resilient, and survivalists,” the Brazilian artist tells Colossal. “They use creativity to overcome obstacles and adapt to any situation they are put in. So in a way, both of them, characters and discarded objects, are proof that there’s value in everything if you know where to look for it.”

Evoking an alternative universe in a state of ruin, Naddeo (previously) renders ramshackle structures and vehicles—which only span a few inches—made primarily of outdated technology, rusted carts and frames, and a plethora of branded materials: a Marlboro sign props up an upper level, a Coca-Cola panel offers protection from the elements, and logoed posters and stickers cover almost every surface. By fashioning these relics anew, the artist speaks to consumerism and the waste it generates, a concern that dovetails with a focus on income and wealth inequalities. He explains:

The gap between rich and poor continues to incessantly grow and it seems like nothing can’t stop it. That’s the harsh and important message of my work, but this message comes wrapped in a nice and warm blanket of nostalgia and the beauty of the composition. This warmth makes up for the harshness of the subject matter.

Currently living and working in Los Angeles, Naddeo is involved in a few group shows in the coming months, including at Beinart and Outre galleries in Melbourne and A. Hurd Gallery in Albuquerque. He’s also preparing for two solo exhibitions next year, which will be at Thinkspace in Los Angeles and at Beinart. Until then, check out his Instagram for glimpses of his process and a larger collection of his dystopian paintings. Centered on the letter “S,” an anachronistic print from Seb Lester (previously) blends hundreds of symbols into one embellished form. Rendered in metallic on black paper, the typographic piece captures an incredibly long timeline, from prehistory to the Dark Ages to the Renaissance to present day. Look closely and you’ll spot snippets of cave paintings, Egyptian hieroglyphics, emojis, and modern logos.

Based in Lewes, England, the artist and calligrapher channeled the heavily detailed marginalia and flourishes of illuminated manuscripts. “I have spent two decades studying the most beautiful examples of intricate letterform and ornamental design I can find. This letter ‘S’ is arguably the most intricate letterform that has ever been drawn,” he shares with Colossal.

Lester released a limited run of 150 gold screenprints, which currently are available in his shop. Check out the video below to see all of the piece’s gleaming intricacies, and follow the artist on Instagram to keep up with his latest releases. 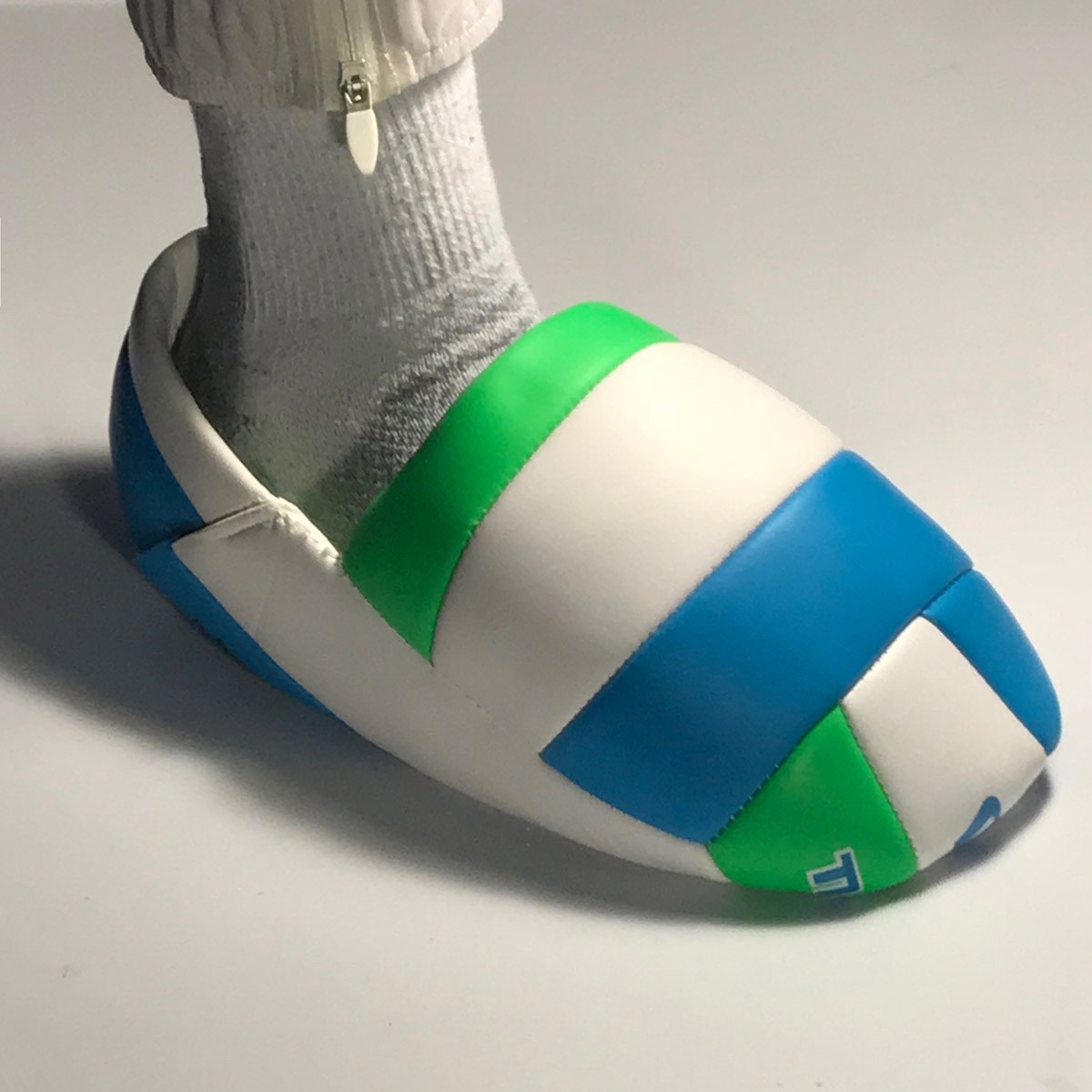 During the weekday, Nicole McLaughlin works as a graphic designer at Reebok. But after hours her relationship to branded apparel and personal accessories takes a different creative turn. McLaughlin uses a wide variety of recognizable consumer goods to form totally new products. Often focusing on footwear, McLaughlin has formed slip-ons out of tennis balls and Levi’s waistband patches, and sandals from eBay packaging tape and IKEA bag handles. Additional creations range from an umbrella of The North Face puffy coats to foldable chairs comprised of athlete’s Gatorade bottles and foam sports fan hands.

The artist chops up and subverts the original functionality of these recognizable products and brands, but also is always careful to maintain—and often repeat—visible logos while she gives each item a new meaning and use. McLaughlin documents her creations in a closely cropped, plain manner that calls to mind images cataloged for an anthropological study. You can see more of her fashion interventions on Instagram, and keep an eye on her online store for functional pieces, all of which are currently sold out. Iceland-based artist James Merry (previously) uses sportswear logos as the basis to his embroidered designs, planting thread-based mushrooms, strawberries, and various flowers on top of Nike swooshes and the ADIDAS logo’s three bars. Although you might not guess it from the simplicity of his sportswear alterations, Merry is a key collaborator with Björk, and has designed many of her costumes for tour and film. You can see more of his blossoming sports logos and elaborate costume designs on his website and Instagram. 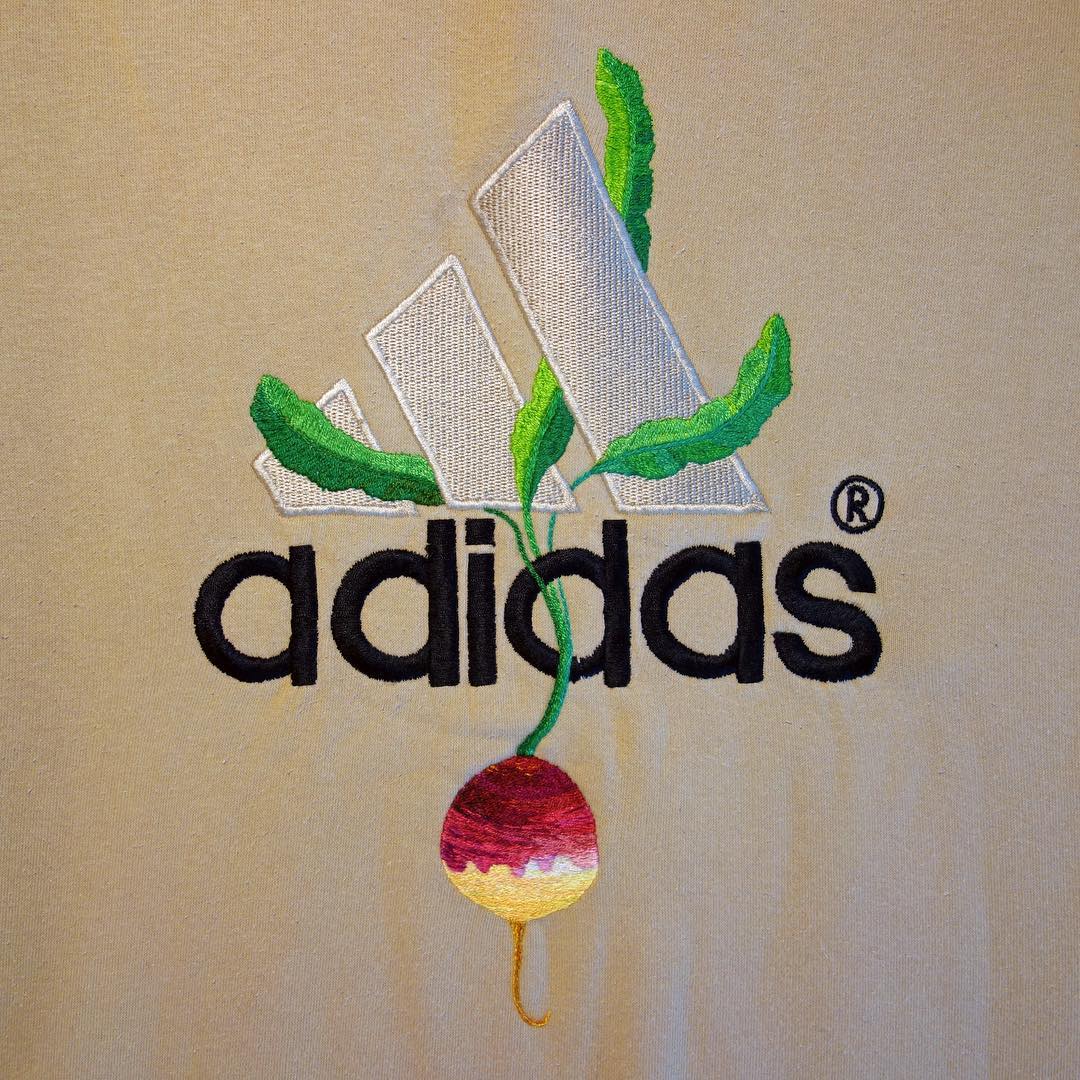