Finnish artist Riitta Ikonen has a rare relationship with postal services around the globe because of her ongoing Mail Art series. The documentary project started in 2003 when Ikonen was a student at the University of Brighton. She began crafting and sending A6-sized packages relaying her travel experiences to her illustration instructor, Margaret Huber. Since then, Ikonen has sent hundreds of parcels constructed with human hair, fish, and broken bits of a record, among countless other objects. “All the cards are snapshots from the everyday: materials that float my direction from the sea/ streets/ subway, finds from mushroom forays or other people’s parties,” the artist tells Colossal. “Sometimes the postcard is a test on a new adhesive or a snapshot of a larger project that I cannot store in its entirety.”

Despite her unusual packaging, the artist says only a few pieces haven’t reach their destination, although works arrive in various conditions often accompanied by an apology from the mail carrier for the “damage” done.

I have discovered that my crocheting skills aren’t yet at the point where I can produce a legible address and fluff from the dryer breaks down too easily in international mail. Most everything that I have considered risqué (white powder packet during anthrax scare, shrimp, small fish, film camera (filled with selfies by the postal workers on its arrival), acupuncture needles, etc.) have all been dutifully delivered to Margaret Huber’s mailbox.

In 2018, Ikonen began sending the mail pieces weekly, although before they head through the postal service, they’re put on view at a PO Box in Rockaway Beach, New York. The artist also is part of a group exhibition at Gallery 8 in New York that’s open through March 8. If you can’t see Ikonen’s unconventional work in person, though, some of her documentary projects are featured in a book devoted to postcards. You also can follow her on Instagram.

Sent from Exmouth in England Master of distortion Alex Chinneck flips parking lots upside down, unzips buildings, and most recently has tied post boxes in knots. Chinneck traffics in everyday structures that are universally recognizable, which serves to unite passersby in reacting to the bizarre interventions. The post box series, which the artist calls ‘Alphabetti Spaghetti‘ has made appearances over the past week across the U.K., in  London, Margate, and Tinsley, adding three bespoke boxes to the more than 115,500 traditional ones that exist across the kingdom. No word yet on whether postmarked letters placed in Chinneck’s sculptures will be delivered. You can see more of the artist’s mind-bending work on Instagram. (via It’s Nice That) 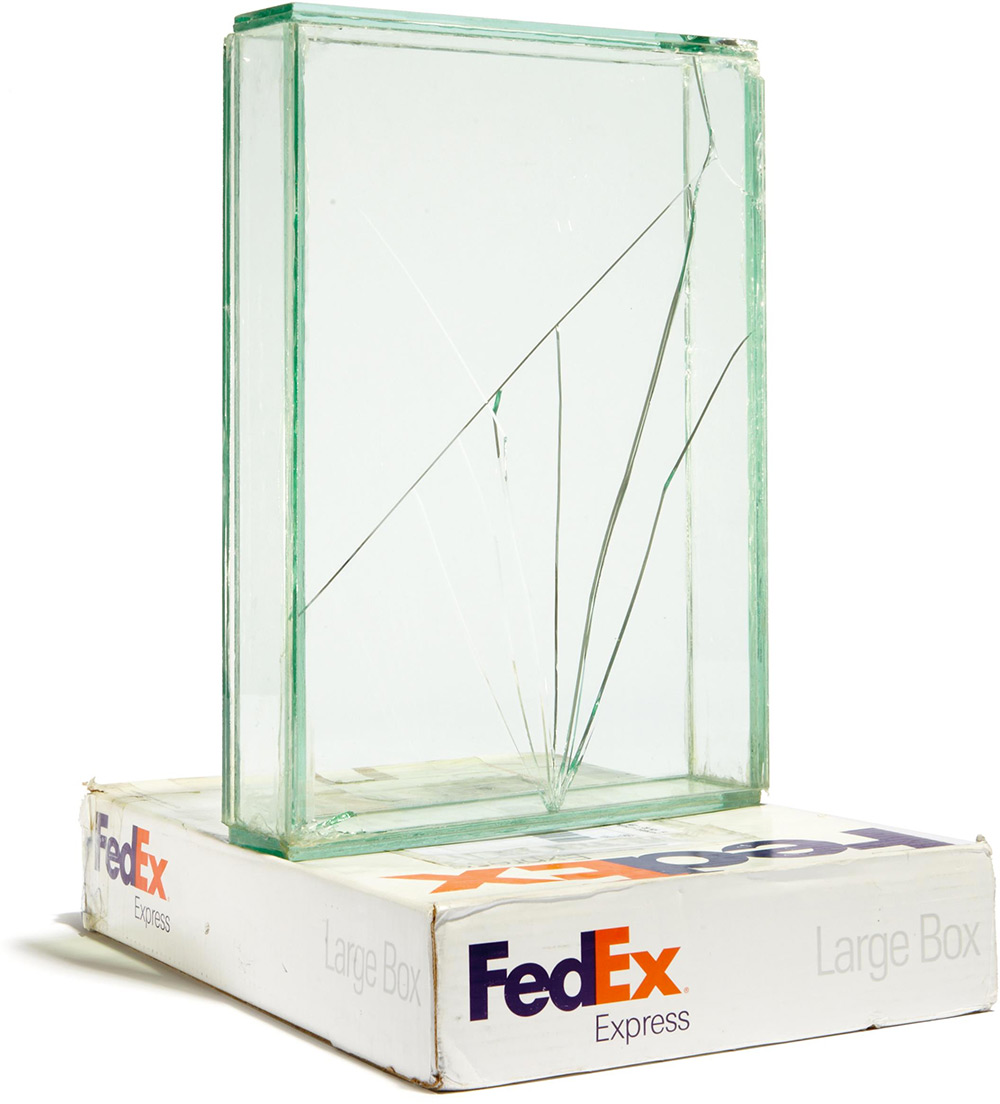 In this intriguing sculptural series spanning 2005 to 2014, LA-based artist Walead Beshty packaged his artworks in FedEx boxes and shipped them across the country to exhibitions and galleries. But unlike most artists who utilize every bit of care to protect and pad their artwork from the inevitable rough handling of mail carriers, Beshty designed his pieces to break. For his famous FedEx works he constructed laminate glass objects that fit seamlessly within the dimensions of standard size shipping boxes. Through the “normal” handling the objects would inevitably crack and shatter and it was up to curators and gallerists to carefully remove each piece for display. The fragile volumes were then given titles that specifically mention the date, tracking number, and box size of shipment.

Not only was Beshty fascinated by obtaining a “fingerprint” of sorts that documented the journey of each package to its destination, but he also found it curious that a corporation has the ability to copyright the exact dimensions of a box, essentially owning an empty shape. He shares in a 2011 interview with Mikkel Carl:

The FedEx works […] initially interested me because they’re defined by a corporate entity in legal terms. There’s a copyright designating the design of each FedEx box, but there’s also the corporate ownership over that very shape. It’s a proprietary volume of space, distinct from the design of the box, which is identified through what’s called a SSCC #, a Serial Shipping Container Code. I considered this volume as my starting point; the
perversity of a corporation owning a shape—not just the design of the object—and
also the fact that the volume is actually separate from the box. They’re owned
independently from one another.

Furthermore, I was interested in how art objects acquire meaning through their context and through travel, what Buren called, something like, “the unbearable compromise of the portable work of art”. So, I wanted to make a work that was specifically organized around its traffic, becoming materially manifest through its movement from one place to another.

Here’s a brief video of Beshty explaining the project during the 2008 Whitney Biennial. (via BoingBoing) 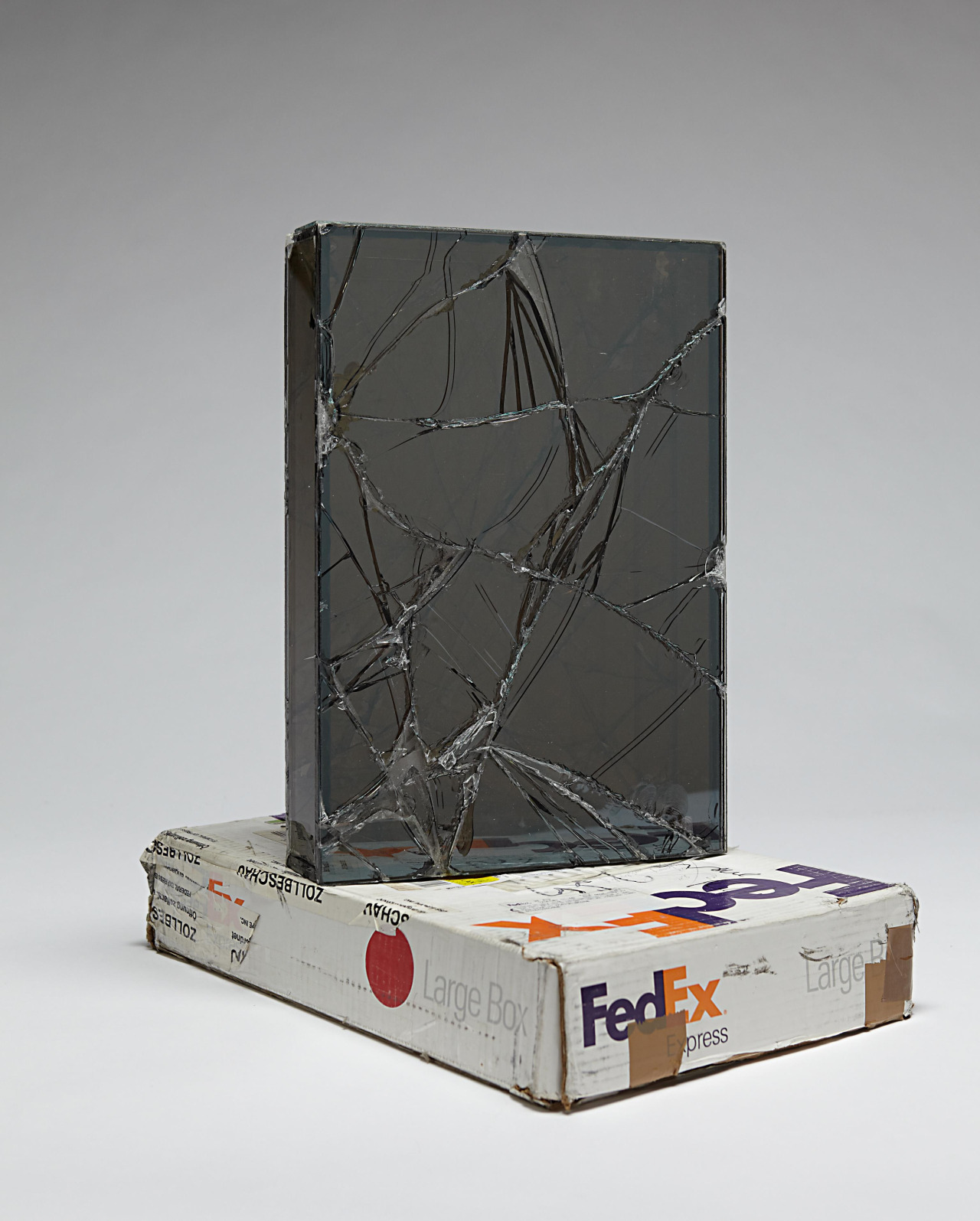 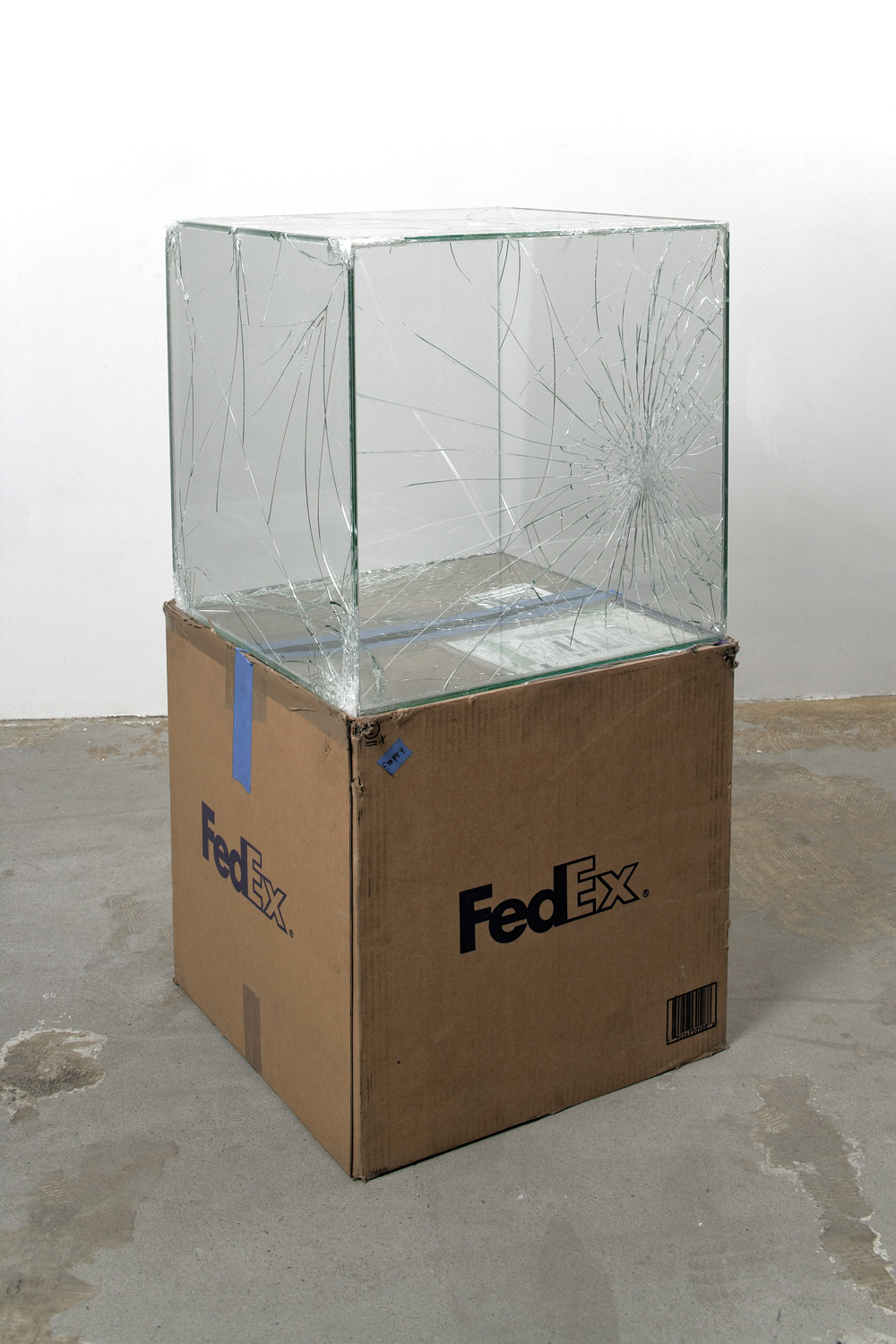 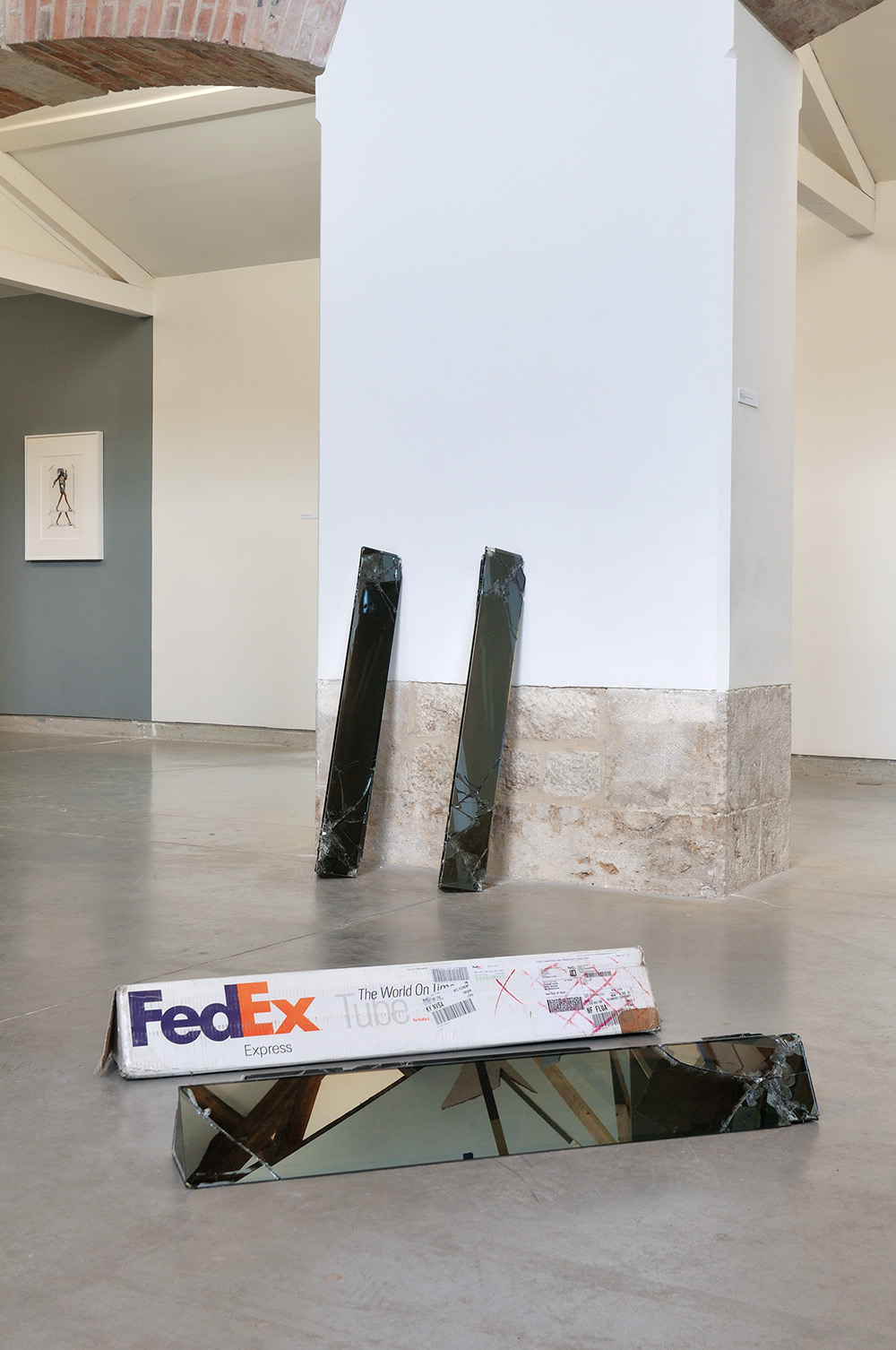 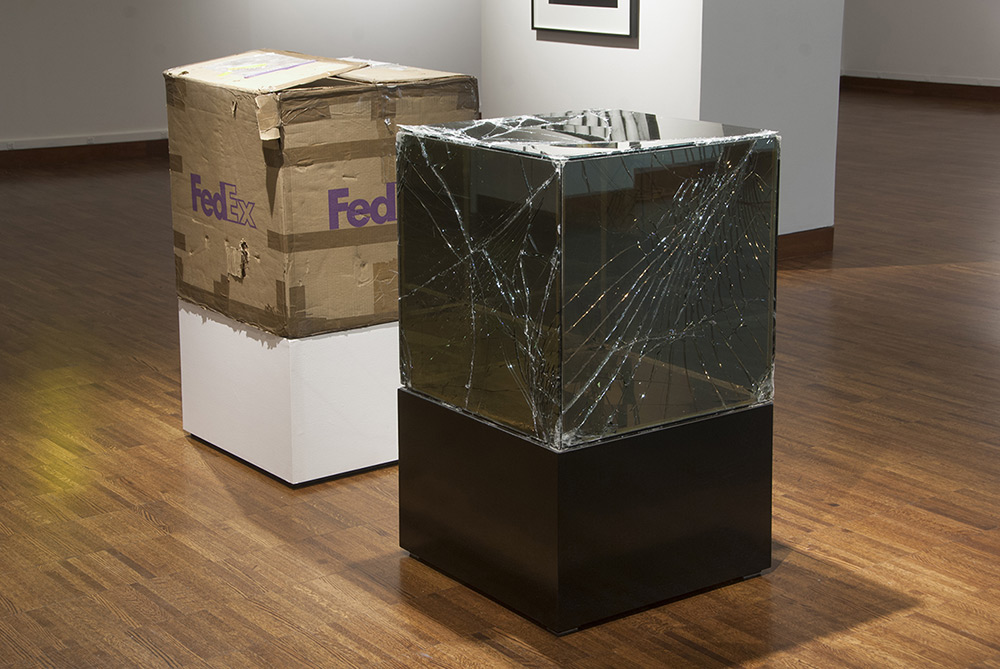 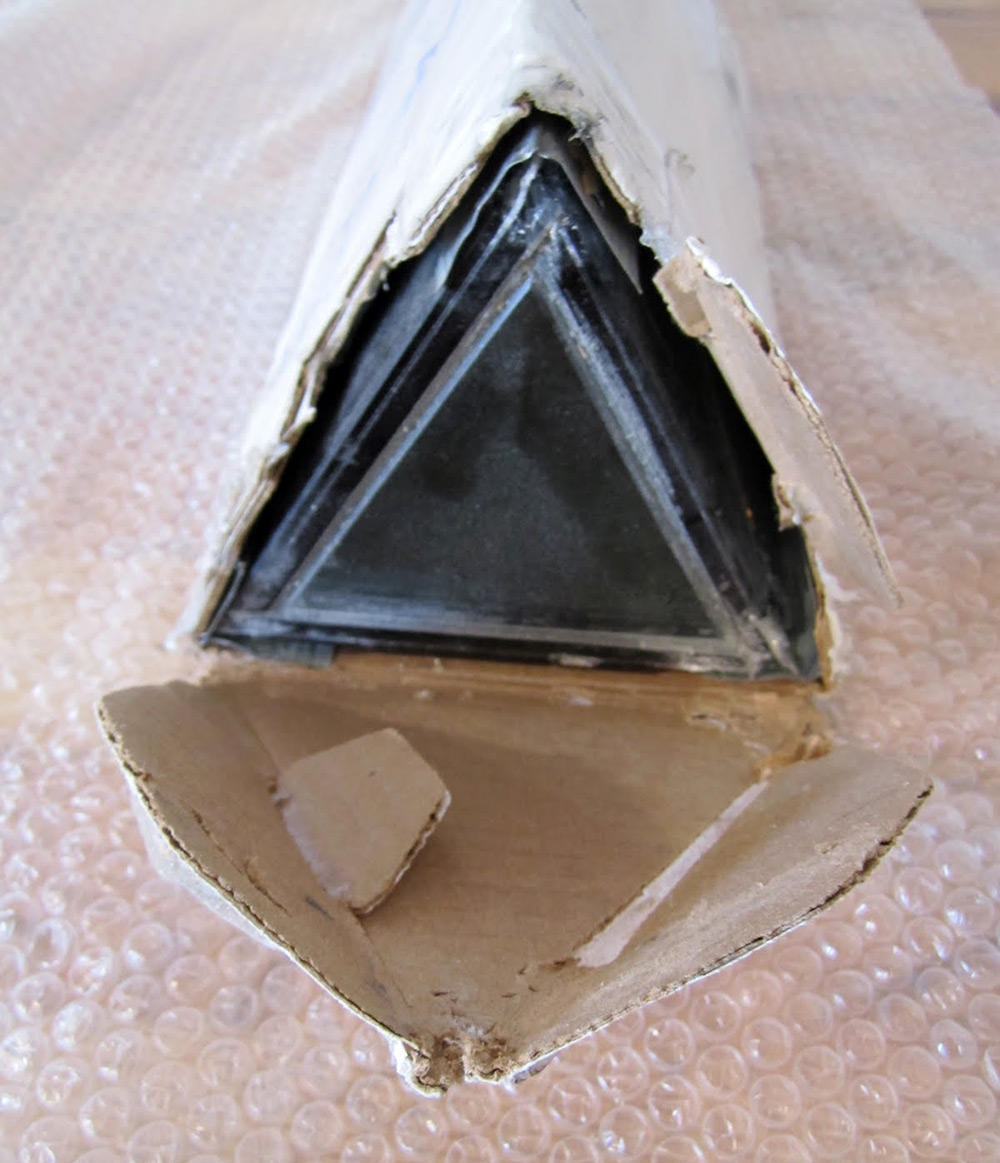 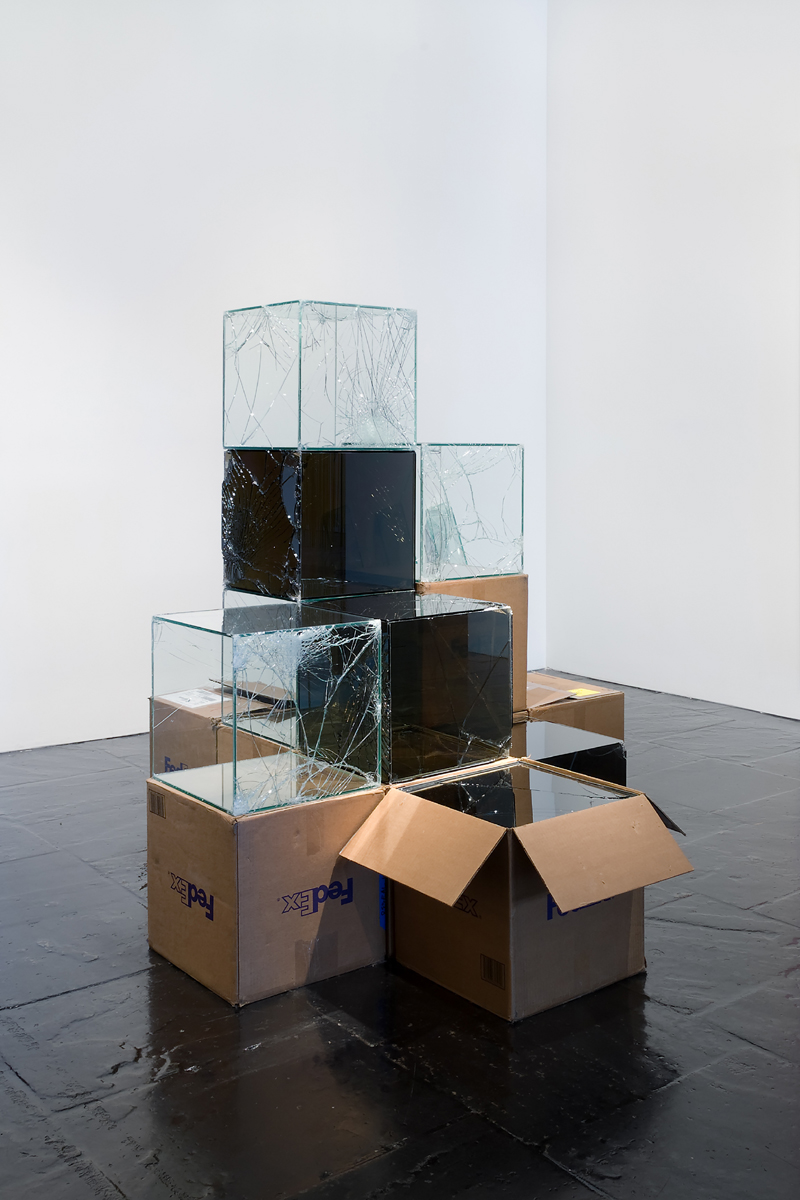