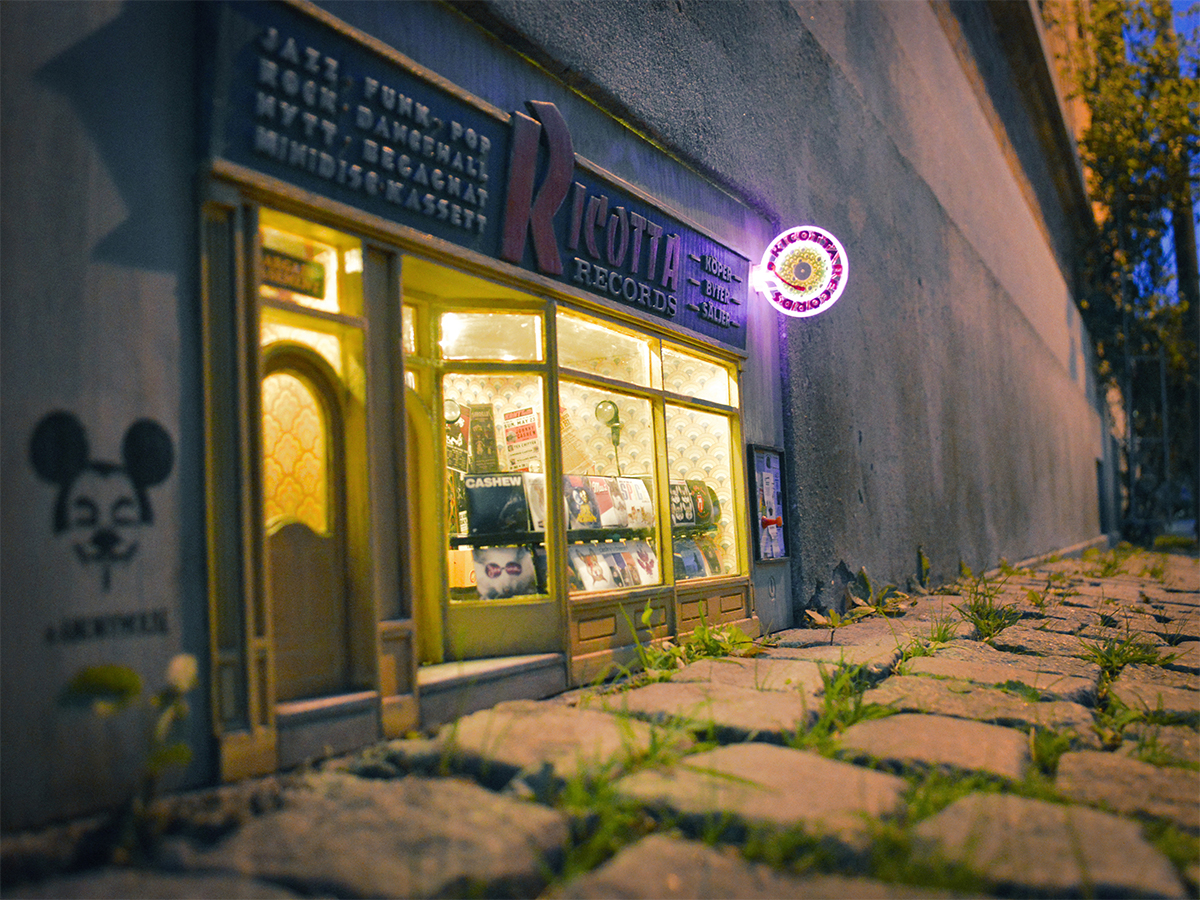 All images © AnonyMouse, shared with permission

In cities across Sweden, France, and the Isle of Man lies a parallel universe fit only for a mouse. Miniature restaurants, record shops, and apothecaries squeeze into ground-level windows on the street next to their human-sized equivalents. The adorable universe is a project from a collective aptly named AnonyMouse, which started crafting the charming scenes in the spring of 2016.

Suggesting that the mice have a symbiotic relationship with the pedestrians on the street, the team repurposes items people throw away, turning a champagne topper into a stool or a matchbox into a table. Twenty-five installments currently exist across Europe, which largely are inspired by Astrid Lindgren’s and Beatrix Potter’s whimsical tales and movies from Don Bluth and Disney. “We thought it would bring a bit of joy to pedestrians passing by, but it grew into something slightly bigger, and as such we’ve probably dedicated more time on each project than we originally envisioned. But that’s just part of the fun,” they say. The team crafts each scene with incredible detail, from recreating iconic record covers to plastering up posters advertising mouse- and rat-based happenings.

As its name suggests, the group’s individual identities are unknown. “We like to think that part of the allure of our installations is that they could be done by anyone,” they say. “And since we do not have a specific agenda with them our identities are unimportant.” AnonyMouse won’t divulge plans for upcoming installations, but you can follow all of its adventures on Instagram. Fanni Sandor has been fascinated by miniatures since childhood, constructing her first sculpture from toothpicks, candle wax, paper, and glue at six years old. “In my country, there (are) no traditions of the 1:12 scale miniature making. In my twenties, I met the first professional miniaturist’s work through the internet. I was completely fascinated,” she tells Colossal.

Today, the Hungary-based biologist and artist fashions minuscule baby bluejays clamoring for food, a mouse peeking out from a bit of bread, and a waddling family of mallards. Inspired by her background in biology, the miniatures feature incredibly accurate details, and most fit easily on the tip of a finger.

Sandor will spend anywhere from two days to two weeks on a single piece, noting that the robin’s nest alone took three days. Her process is multifaceted and begins with collecting photographs of the species before sketching a prototype. Forgoing molds, the artist employs embossing and pin-ending tools to sculpt the animal figures from polymer clay and wire. After baking, she chisels a few more details, paints, and attaches the fur and feathers where necessary.

In 2016, Sandor become a fellow at The International Guild of Miniature Artisans. To follow her upcoming projects, head to Instagram. 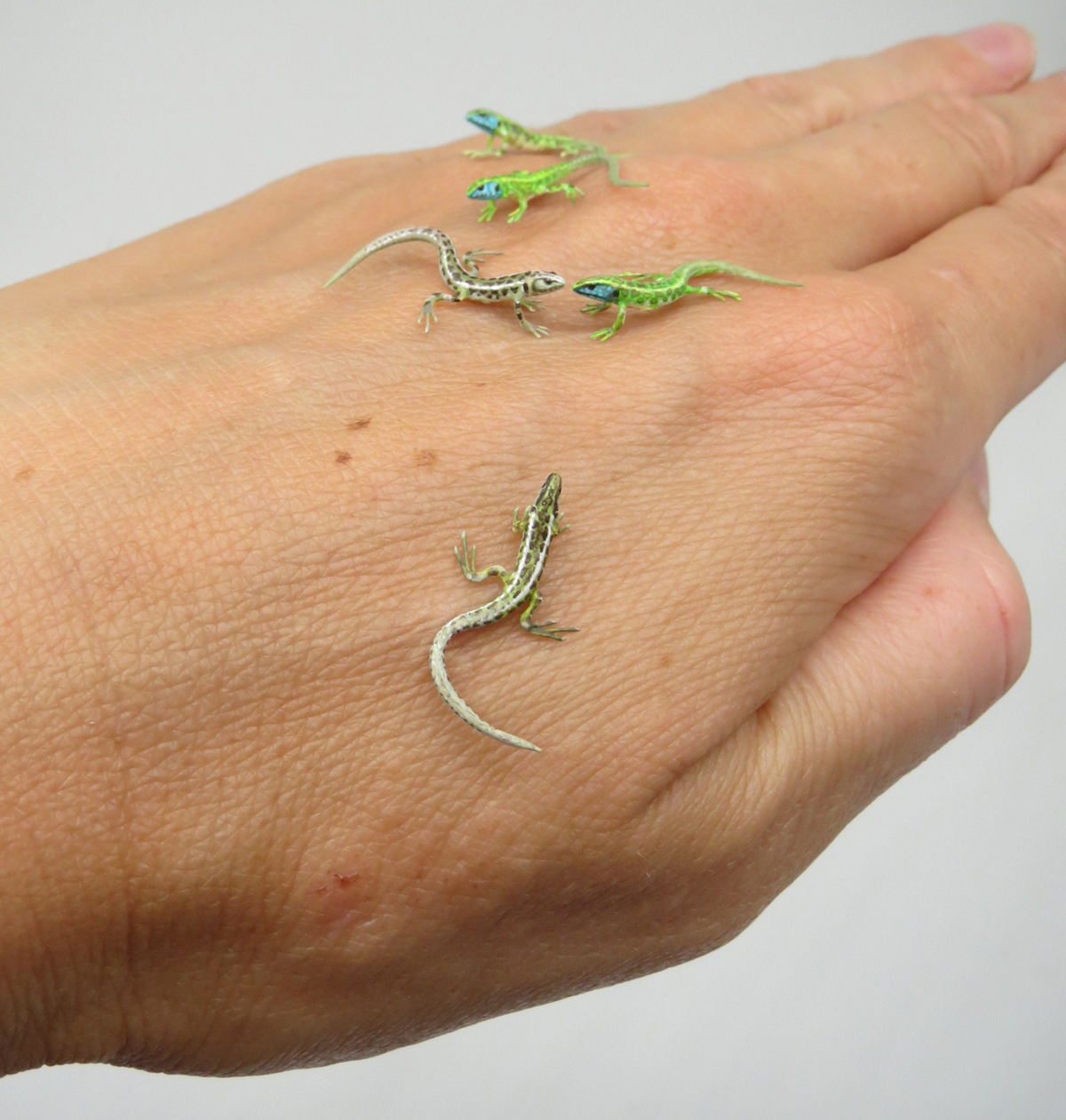 Hyperrealistic Depictions of a Fictional Mouse-Butterfly Species by Lisa Ericson 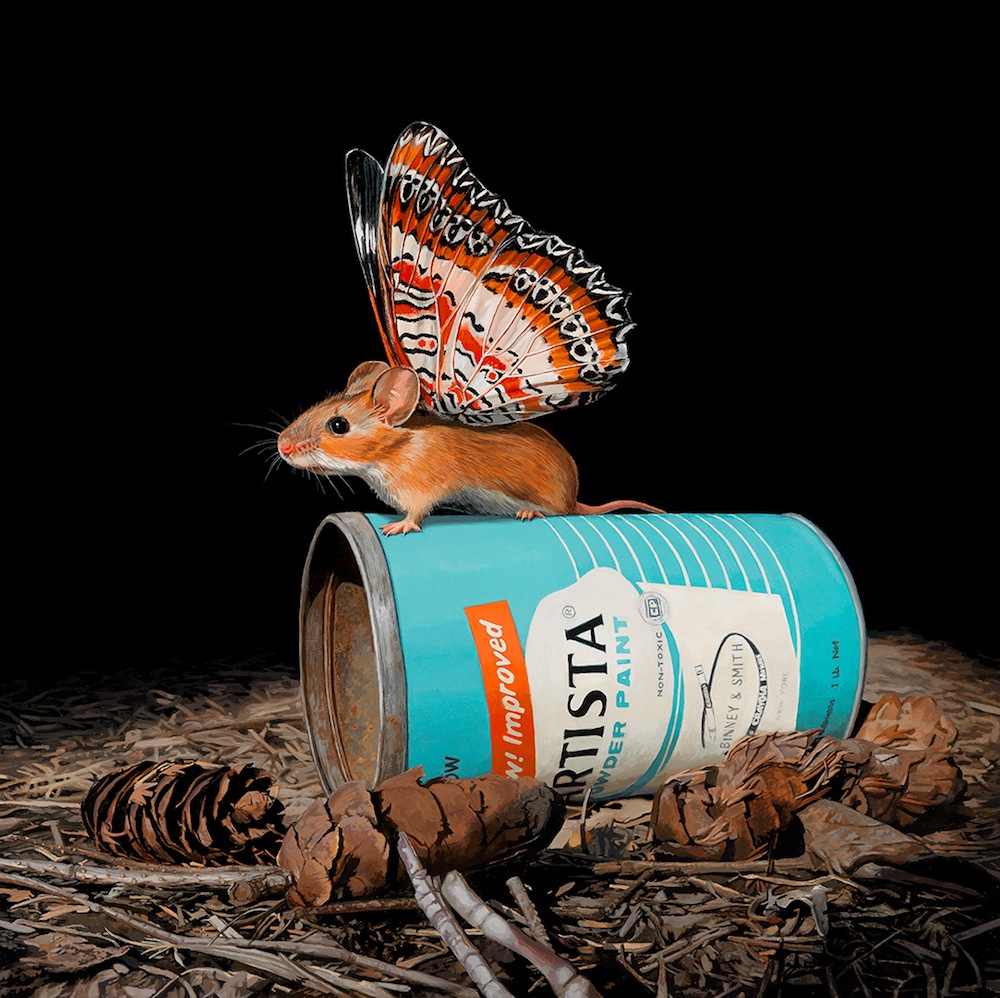 Lisa Ericson‘s logo is just as enchanting as her hyperrealistic paintings, a tiny mouse with butterfly wings floating between her first and last name. Ericson works as a multi-hyphenate, utilizing her visual talents as an artist, illustrator, and designer to craft meaningful images for both her client and personal practice.

In her newest series Ericson skillfully depicts her invented species of mouse-butterfly while they explore environments filled with detailed mushrooms, forgotten tin jars, and forest brush while sometimes clutching found objects such as acorns and raspberries.

Ericson’s first exhibition, and one featuring this series, is displayed at Portland’s Antler Gallery alongside Heiko Müller and John Casey until April, 27th. During my research I also learned that Ericson illustrated Ramona Ausubel’s website (one of my favorite contemporary authors), and can be seen here. (via This Isn’t Happiness, Hi-Fructose)