Each January, Pulicat Lake in Tamil Nadu, India, harbors tens of thousands of lanky, pink-feathered birds that gather in the warm waters during their annual migration. Approximately 20 flocks of flamingos land in the region in early November and stay until May, transforming the 750-square kilometers of brackish lagoons into breeding grounds for the long-legged creatures.

Photographer Raj Mohan documented these temporary settlements in a series of aerial images that capture the birds’ sprawling, even bizarre formations. The avians dot the landscape, congregate in heart-shaped groups, and align in long, perfect diagonals, seemingly choreographed arrangements visible only from above.

Mohan’s images were taken during what’s known as the annual flamingo festival, which “promote(s) tourism at Pulicat. Several bird photography contests, environment education sensitization programs, school excursions, etc., are organized to increase awareness,” he shares on Peta Pixel. “This attracts a large number of bird watchers and photographers from different places.” In addition to the spectacle they create, the flamingos also help to control the otherwise rampant algae growth in the lake and prevent the need for human intervention.

A corporate professional by day, Mohan is based in Chennai but currently spending his time in Bangalore. Travel has always been his preferred way of exploring India’s natural diversity, and you can find more of his work on Instagram. For another glimpse of flamingo migration, head to Mexico’s Yucatán Peninsula with Claudio Contreras Koob. 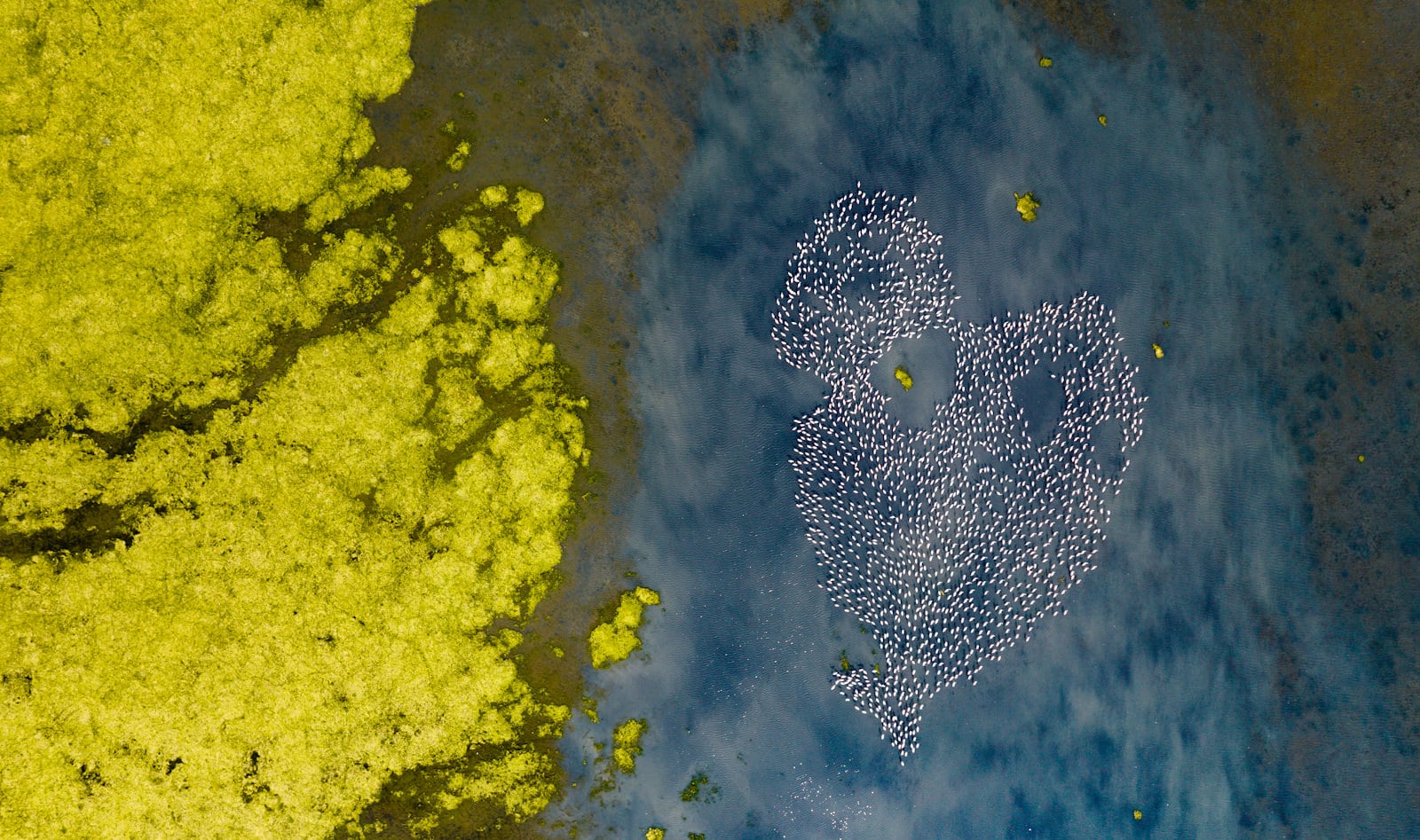 What route does the whooping crane follow as it travels south each year? What about the long-winged turkey vulture? A new interactive guide from Audubon tracks the journeys of more than 450 species as they travel around the hemisphere. Complete with the conservation organization’s signature illustrations, the Bird Migration Explorer features digital maps that offer detailed insight into such grand-scale avian movement and are searchable by different taxonomies. Follow a tundra swan’s annual flight path from the arctic, see where the organization spots tagged merlins, and explore the difficulties a horned lark faces as it encounters human activity and climate crisis-related changes on its treks. (via Alastair Humphreys) Since its inception, photography has dominated the way we visually remember and describe the world around us and where we are within it. It has tapped into desire, joy, grief, and superstition, such as in the Victorian era, when some believed it could be a channel between people and spirits in the afterlife. In portraiture, photography immortalizes its subjects and has transformed artists’ ability to express themselves and tell stories. For Ethiopia-born, South Sudanese photographer Atong Atem, who is based in Melbourne, the medium enables a salient exploration of the African diaspora and migrant narratives by focusing on the relationship between figures and the interior spaces they inhabit.

Sometimes referred to as Naarm, Melbourne comprises the traditional lands of the Kulin Nation, itself a collective of five Aboriginal tribes. Paralleling her exploration of the nature of place, culture, and postcolonial narratives, Atem’s series of powerful self-portraits focus on how perceptions of identity are shaped through relationships between place, dress, and custom and the way they change over time or merge when people move. Occasionally referencing art history, such as “Blue Face” modeled after Dutch artist Johannes Vermeer’s “Girl with a Pearl Earring” (c. 1665), her works also nod to groundbreaking 20th century photographers Malick Sidibe, Philip Kwame Apagya, and Seydou Keita, who expanded traditions of studio portraiture. In a similar spirit, Atem explores intersections between place, people, and time to create a visual representation of the connection to culture.

This year, the artist’s first book of photographs, titled Surat (Sudanese Arabic for “snapshots”), was commissioned by Photo Australia. The second edition is due to be published by Perimeter next month, and you can find more of the artist’s work on her website and Instagram. (via ART RUBY)