The innovative team over at the Catskills-based studio Nervous System (previously) released a new line of miniature jigsaws that match organic shapes with similarly natural subject matter. All spanning less than eight inches, a spotted mushroom, mottled moth, fern, succulent, and blooming begonia comprise the collection that’s a small but challenging display of the planet’s tiny wonders. Each puzzle is encased in a plywood frame and has approximately 40-45 pieces with one whimsy cut in the shape of the larger form. Nervous System plans to add to the series in the coming months, and you can shop the puzzles shown here on its site. 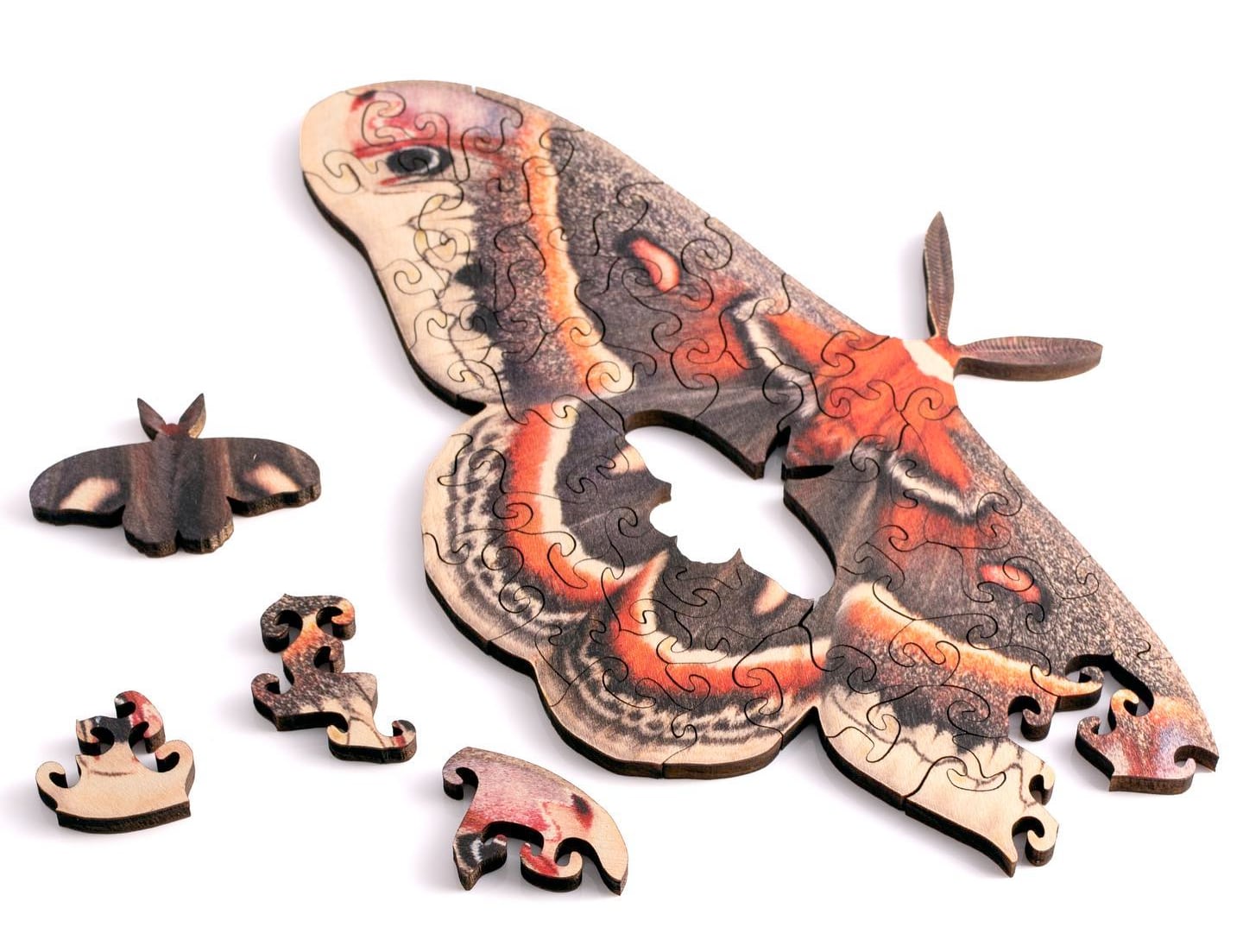 In a cozy studio overlooking a garden in Blackwell, Missouri, artist Larysa Bernhardt creates colorful moth sculptures with a needle and thread. Her fabric creatures are embroidered with old tapestries, often portraying historical people, animals, and delicate botanical forms on their wings: one specimen with a rusty orange abdomen depicts a little bird taking flight, while another is blue with a Medieval woman looking at a flower.

Able to stand on their own or hang from the wall, the handmade moths feature eyes made from Czech glass beads and bodies of cotton velvet and Belgian linen. Bernhardt also wires their wings, enabling people to shape them into their desired position.

The artist initially began by collecting vintage textiles, including silk tapestries and wool, and was interesting in analyzing and unraveling their histories, taking an interest in how creatures, such as moths, often inhabit such materials. “I have some very old wool and silk tapestries, and I’m still trying to unravel the stories behind them,” she tells Colossal. “Those will never be cut, they’re treasures, and I’m constantly checking for moth larvae…and just like that, moths entered the chat! What I love and what I fear melded into my work, in what I believe is a magical, albeit slightly menacing way.”

In addition to the material components, the moths are inspired by travel, television shows, books, and “even phrases someone drops in the grocery line to checkout,” Bernhardt says. “I will never tire of seeing how magically creative humans are,” Bernhardt explains.

Some of her works are on view now at New Orleans’ Mortal Machine Gallery, and you can view more of her work on Instagram and shop available pieces on Etsy. (via Supersonic Art) 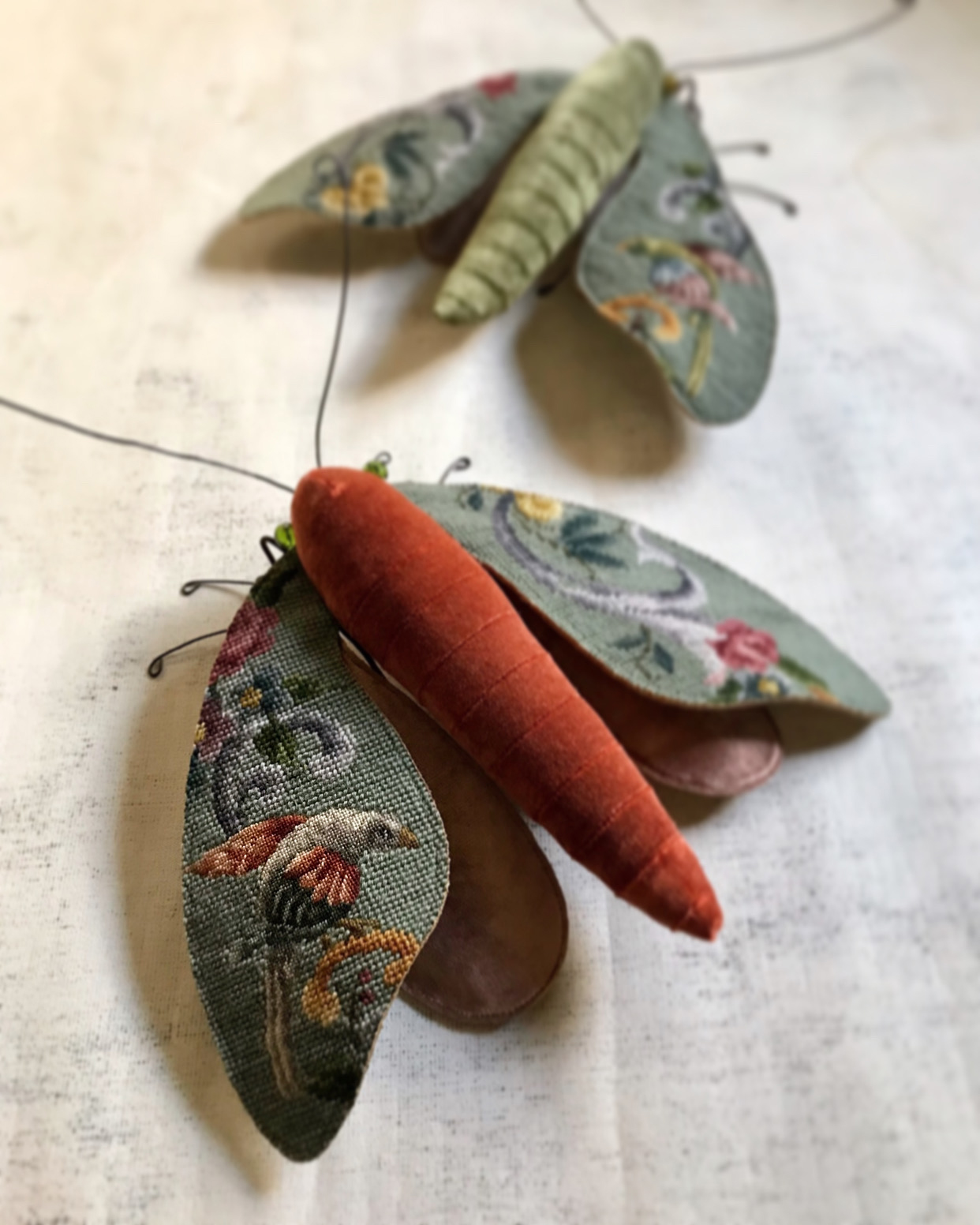 Illustrations of the elegant atlas moth and paper kite and orange-barred sulphur butterflies fly through a new trio of analog animations by J.C. Fontanive. The Cleveland-born artist created a sleek flipbook machine while he was a student at the Royal College of Art back in 2004 and has since crafted myriad designs featuring birds and insects that fly around the small, metallic frame. His most recent works bring the 2D Lepidoptera to life as they burst into a flurry of quick movements, and the individual paper cards emit a subtle whirring, similar to that of fluttering wings. “Flipping pages make these handmade sculptures live in real sound and space. Creatures flit and flicker by to awaken the poetry of movement and inspire through nature and invention,” Fontanive says in a statement.

You can see the trio in action on Vimeo and shop available sculptures on the Flipbook Machine site. Follow the artist’s projects on Instagram.