Interview: Jessica Oreck of the Office of Collecting & Design On Her Enormous Museum of Miniatures In Las Vegas, the Office of Collecting & Design is a haven for the minute, the small objects that have been broken, separated from their partners, or grown obsolete and somehow found their way into the hands of Jessica Oreck. Today, the museum of miniatures houses countless objects from handmade sushi smaller than a pushpin and a teeny-tiny tube of Colgate to stone marbles and limbs detached from toy figures.

I see each object as being stitched together with the fabric of both its creator and all its previous caretakers. I try to preserve that connection while still keeping the object accessible for new interactions, new connections, even if that means the physicality of the object may degrade. The collections aren’t frozen behind glass. They are very much still a part of a living, breathing existence.—Jessica Oreck

Oreck speaks in this interview about the origin of the ever-expanding collection of miniatures, how respect and intuition ground her approach to the objects, and the mysterious story behind one of the strangest items she’s encountered.

Read the interview and see the collection. In the Gifu Prefecture of Japan, a nucleus of creativity blossomed in Kasahara Town, Tajimi City, more than a millennium ago. Known for its history of ceramic production, the region celebrates its distinctive heritage with a spring and autumn festival, a ceramics-themed park, and pottery shops that teach visitors the tradition. Among its newest attractions, set in a rolling green, the Mosaic Tile Museum Tajimi focuses on a more recent aspect of the ceramics industry.

Following World War II, reconstruction efforts required building materials, and tiles were suddenly in high demand. In its heyday in the mid-1900s, Kasahara Town had more than 100 tile factories, and the delicate pieces were still being used for the construction of high-rise buildings in the late 1980s and early 1990s. Soon, international competition and new materials hampered local manufacturing and the ornate tiles fell out of fashion, discarded when new buildings replaced earlier ones. Around that time, a group of locals who understood the historical significance of these tiles began to salvage as many as they could from structures scheduled for demolition. “The volunteers fondly recall how their requests were initially met with bewilderment, but their activities have resulted in the preservation of the extremely rare materials forming our enormous collection today,” says a statement on the museum’s website.

Housed in an architecturally exuberant expression of the relationship between ceramic and the earth, the building was designed by architect and historian Terunobu Fujimori to nestle sympathetically in the surrounding landscape. Today, the museum’s collection holds more than 10,000 individual tiles, sample books or boards portraying tile products, tools and utensils, and objects such as wash basins, bathtubs, and export goods.

You can find more information on the museum’s website. Ariel Adkins in a skirt inspired by Hilma af Klint, “The Ten Largest” (1907) at the Guggenheim Museum. Image by Allison Chipak. All images courtesy of Ariel Adkins, shared with permission

After a museum visit, we might pick up a postcard or T-shirt as a memento of the artworks we’ve enjoyed most. Brooklyn-based blogger Ariel Adkins, who is also Curator of Art, Culture & Community at Twitter, takes her love of masterpieces to the next level by creating one-of-a-kind apparel inspired by some of the world’s most influential artists. Donning capes, dresses, and coveralls in bright colors and bold patterns, Adkins draws inspiration from a variety of aesthetics and eras to make garments for herself and for people she meets who share a similar love for the power of expression. Painting directly onto the fabric of the clothing, she translates the forms and hues of specific artworks into wearable compositions.

Adkins is the creator of Artfully Awear, which began as a way of responding to grief and healing in response to the loss of her mother, who was an artist. Through the language of fashion, both a personal and public assertion of identity and style, she continues the project as an embodiment of joy and a unique way of kindling togetherness. She also admires iconic fashion like designer Michelle Smith’s dress worn by Michelle Obama in Amy Sherald’s portrait, utilizing her platform to share stories of groundbreaking moments in art history. A cape inspired by Etel Adnan, “Mont Tamalpaïs” (1970/2017) at the Guggenheim Museum. Image by Olivia Manno 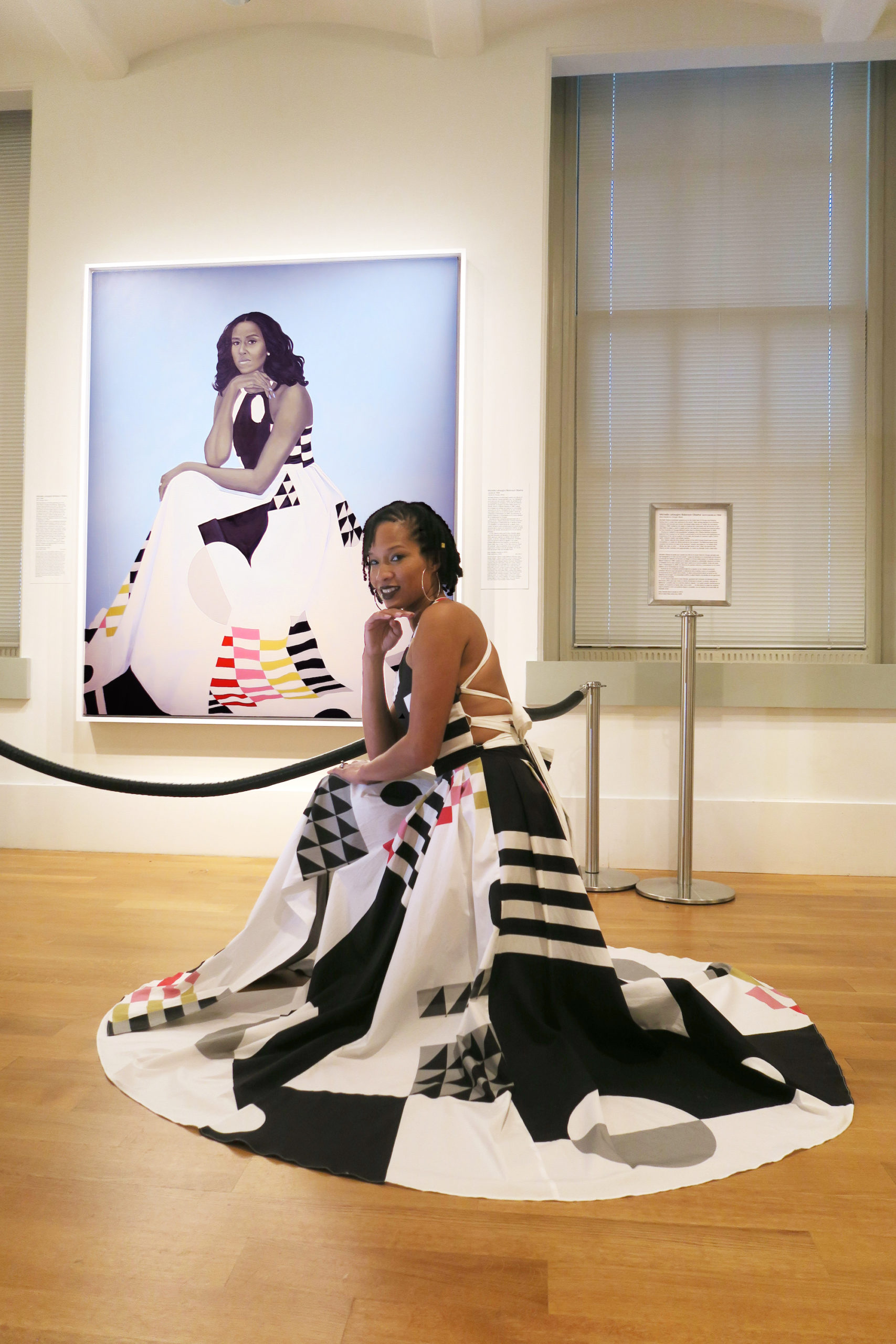 Dress inspired by Seward Johnson, “Welcome Home” (2014) at Grounds for Sculpture. Image by Will Sealy Image by Will Sealy On the edge of the city of Sheboygan in northeast Wisconsin is a new museum nestled into the hillside. Opened earlier this year, the Art Preserve of the John Michael Kohler Arts Center is home to 40 artist-built environments, or “spaces and places that have been significantly transformed by an artist to embody and express aspects of their history, place, and culture, their ideas and imagination.” The first of its kind, the spectacular, immersive space is an ode to the artists and their intellectual and creative trajectories, displaying a staggering array of installations, sculptures, paintings, and myriad works across mediums.

Ranging from Emery Blagdon’s suspended kinetic assemblages made of sheet metal, holiday lights, and other found objects to Nek Chand’s troupe of more than 150 mosaic figures, the artworks are eclectic in discipline, scale, and aesthetic. Each of the environments consists of thousands of objects, structural components, and ephemera that form a holistic, comprehensive view of the artist’s life and work. Around the circular pathway winding through Ray Yoshida’s reconstructed Chicago apartment, for example, are ritual masks from New Guinea, printed works, pieces of pop culture from Maxwell Street Market, and notes and letters, offering an intimate glimpse into his diverse collection and personal relationships.

In addition to the environments, the 56,000-square-foot space also houses 11 commissioned responses that included standalone works and projects literally embedded into the preserve’s structure. The Denver-based architecture studio Tres Birds designed the building, although the stairway was completed in collaboration with the late Ruth DeYoung Kohler II and uses concrete pavers that jut out beyond the walls to display a series of “hobo symbols,” or emblems travelers historically used to denote safety. Kohler conceived of the Art Preserve while director of the John Michael Kohler Arts Center, where she championed local and international artists and devoted herself to protecting their works and legacies.

Watch the video below for a tour of the expansive space, and dive into the full collection, which includes pieces from sites in Wisconsin, New York City, Mississippi, India, and other global locations, on its site. The glittery “Beautiful Holy Jewel Home” by Loy Bowlin is flanked by an installation of paintings by Gregory Van Maanen at the Art Preserve. Photo by Rich Maciejewski, courtesy of John Michael Kohler Arts Center