“This Is Me Today”, all images courtesy of Calvin Ma

Sculptor Calvin Ma channels his experience of social anxiety into imaginative ceramic sculptures that fuse human characters with birds. The avian elements act as suits of armor, protecting the person from the outside world, and reflect Ma’s personality in fight or flight situations. Carefully articulated feathers cover the surface of each sculpture, from the mask-like bird headdresses to the arms and torso of the humanoid figure. In previous bodies of work, the artist has used houses as his metaphor with walls, windows, and chimneys forming the protective outer shell of each sculpture.

“I never really felt comfortable in my own skin in social settings, so I created these characters to help tell stories about it,” Ma tells Colossal. “Each piece is meant to act out a specific social anxiety related experience. I try not to get too dark or serious with the work and really try to have fun with it.”

The Bay Area-based artist has a two-person show with Erika Sanada (who is also married to Ma) at Sherrie Gallerie in Columbus, Ohio from July 28 to September 3, 2019, and a solo exhibition at Antler Gallery in Portland, Oregon opening on November 28. Alongside these shows, Ma will also be sharing pieces in at SOFA Expo in Chicago and at Haven Gallery in Long Island, in late October and mid-December, respectively. You can explore more of the artist’s sculptures on Instagram. “One Of The Crowd” An Owl-Shaped Cabin Invites You to Sleep off the Grid in Bordeaux, France A cluster of three hollow wooden owls peer out from the end of a dock in Bordeaux, France, connected from within to form a two-story cabin. The Watchers was designed and built by Zebra3, a local contemporary art production company. The design was inspired by the small owls that nest on the ground in the surrounding marsh, with shingles to match their feathery heads.

“The idea of ​​birds came to me very quickly,” said Candice Petrillo, Zebra3’s key designer on the project. “After the last extension of the commercial zone, I saw migrants swirling around in the sky, looking for the old dried wetland. The nod of animal eye and the curve of the object are a tribute to the sculptors François Pompon and François-Xavier Lalanne.”

The structure is a part of a series of unique buildings scattered throughout the region, cabins that invite guests to spend the night for free in order to encourage hiking and exploration. The project, Les Refuges Périurbains is a collaboration between Zebra3 and Bruit du Frigo. You can see more of the area’s cabins on Les Refuges Périurbains’ website, including this lakeside home shaped like a cloud. (via Inhabitant) 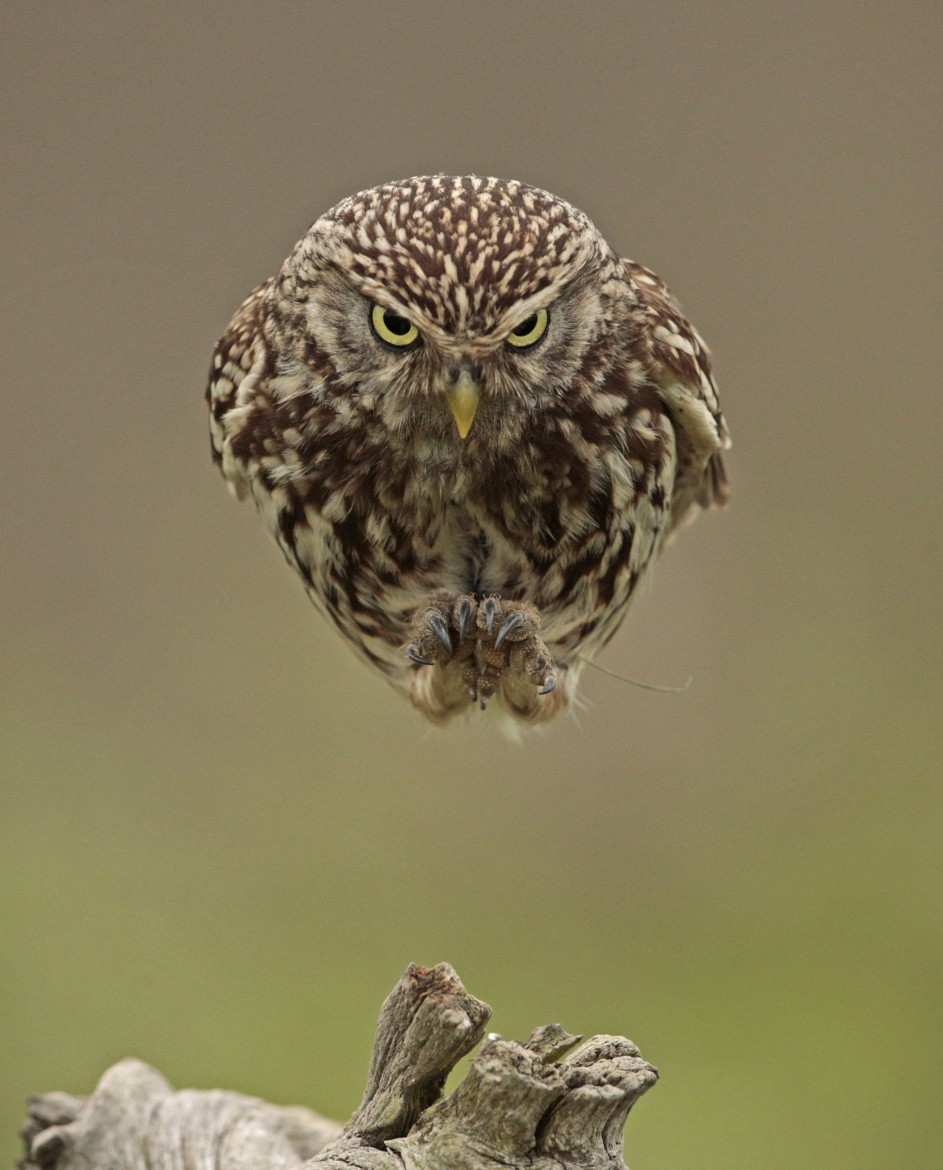 British photographer Russell Savory captured this amazing shot earlier this summer of an owl flying directly toward his camera. With its wings pulled back, it looks like a hovering two-eyed spaceship. Though don’t let the perspective fool you, Savory was shooting from a distance with a 600mm telephoto lens.

Some wonderful owl prints by Josh Brill over at Lumadessa. Available as giclees in three sizes and 5% of the proceeds are donated to charity. (via omg posters)