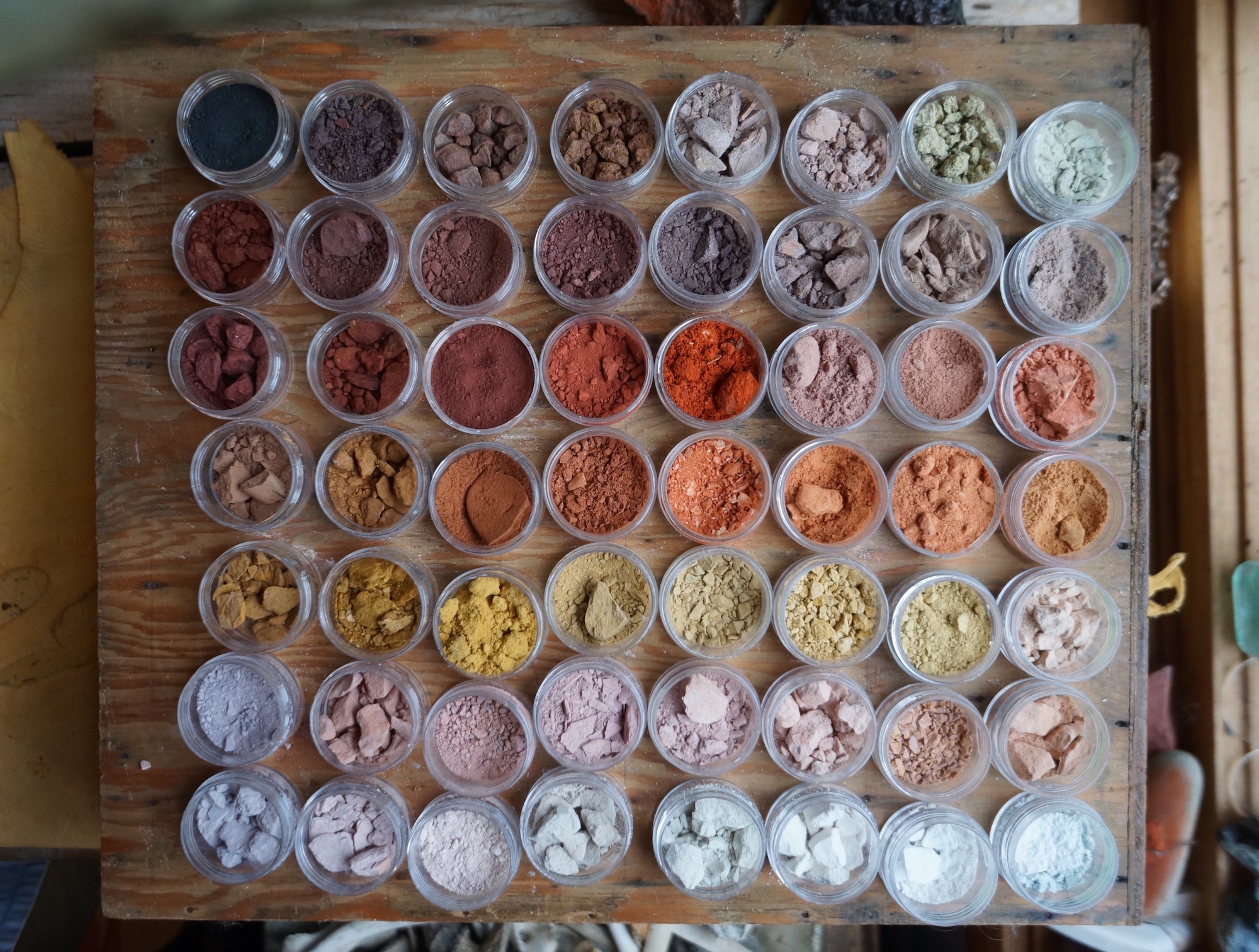 The first blue pigment to have been created in over 200 years will serve as the newest Crayola crayon. “YlnMn blue” was not developed within an arts context, but rather accidentally discovered in in an Oregon State University (OSU) chemistry lab in 2009. Graduate student Andrew Smith made the discovery alongside Mas Subramanian after combining manganese oxide, yttrium, and indium, elements which also serve as the inspiration for the pigment’s name.

“Most pigments are discovered by chance,” Subramanian explained in a statement. “The reason is because the origin of the color of a material depends not only on the chemical composition, but also on the intricate arrangement of atoms in the crystal structure. So someone has to make the material first, then study its crystal structure thoroughly to explain the color.”

YlnMn blue has a unique elemental structure which allows its manganese ions to absorb red and green wavelengths of light, only reflecting back a deep blue. This color is so durable that even when placed in oil or water it does not fade which makes it an attractive and versatile commercial product.

Shepherd Color Company, which received exclusive licensing to YlnMn blue in 2015, has since partnered with Crayola to launch its newest crayon. YlnMn blue’s name will be replaced this summer after a public rebranding contest by Crayola which ends June 2. The vibrant blue will take the place of Crayola’s yellow Dandelion crayon, which is being retired after a 27-year-run. (via Hyperallergic)

Professor Mas Subramanian gazes at YInMn blue which was discovered in his lab in 2009. (Photo courtesy of Karl Maasdam/Oregon State University)

A Vault of Color: A Peek Inside Harvard’s Collection of 2,500 Pigments

Although it’s only been a few months since we mentioned Harvard’s splendid pigment collection housed inside the Straus Center for Conservation and Technical Studies, the team over at Great Big Story just took their cameras inside for a closer look. Straus director Narayan Khandekar takes us through the collection to see some of the rarest pigments including a particularly vivid shade of yellow produced from the urine of cows that are fed only mango leaves. Delightful! The Harvard Art Museums, during renovation and expansion, showing the Straus Center for Conservation and Technical Studies. Photo: Zak Jensen.

The Straus Center for Conservation and Technical Studies at Harvard Art Museums is different than many other departments of its kind—its visible to the public. The public can witness conservators at work as well as view 2,500 pigment samples placed in tincture bottles and housed behind tall glass cabinets. The samples are reminiscent of medicine bottles—the concentrated material’s purpose to help doctor paintings rather than physical maladies.

The Forbes pigment collection was started by its namesake—Straus Center founder and former Fogg Art Museum Director Edward Forbes who began the collection at the turn of the 20th century. Forbes would collect his samples from his travels all over the world, bringing back pigments from excavated sites at Pompeii to rare lapis lazuli found in Afghanistan.

Forbes’ interest in pigments and preservation started with his purchase of the 14-century Madonna and Child with Saints, which he bought in 1899 and noticed that the painting was quickly deteriorating. Harvard Art Museums research curator Francesca Bewer remarks in her book A Laboratory for Art: Harvard’s Fogg Art Museum and the Emergence of Conservation in America, 1900-1950 that he then began a passionate exploration into the process of how paintings were made. This interest led to collecting the materials needed for the preservation of fine artworks alongside his own collection of early Italian paintings.

“Every time he traveled he would bring things back with him,” Senior conservation scientist Narayan Khandekar told WBUR. “And these are Japanese pigments and binding media that were collected in the 1930s. And we have one of our prized possessions, this ball of ‘Indian yellow,’ which is made from the urine of cows fed only on mango leaves.” The production of Indian Yellow has ceased because of its harmful effects on cows, but ancient pigments are not the only focus of the collection which stopped amassing samples after World War II. Recently however, the collection has begun to collect contemporary pigments that have come into the market over the last 70 years including modern and synthetic pigments.

If you can’t make it to the floor-to-ceiling display of pigments in Cambridge, you can see an electronic directory of these materials through the Museum of Fine Arts, Boston’s Conservation & Art Materials Encyclopedia Online (CAMEO) database here. (via Hyperallergic)

Update: A new book, An Atlas of Rare & Familiar Colour, which showcases the Forbes Pigment Collection, was published in Spring 2018. 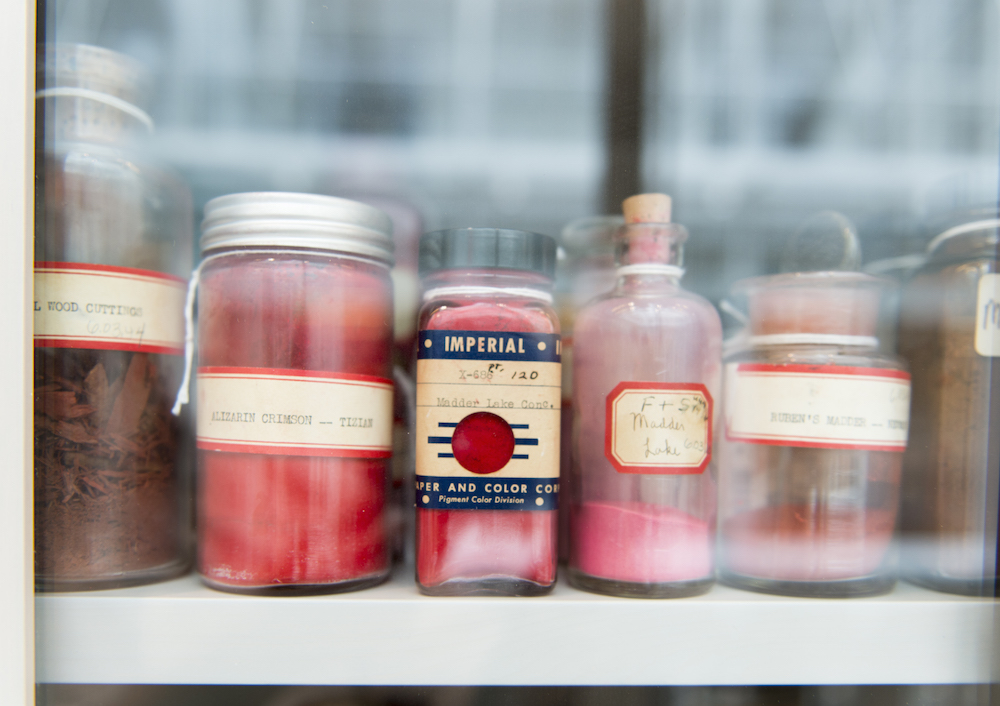